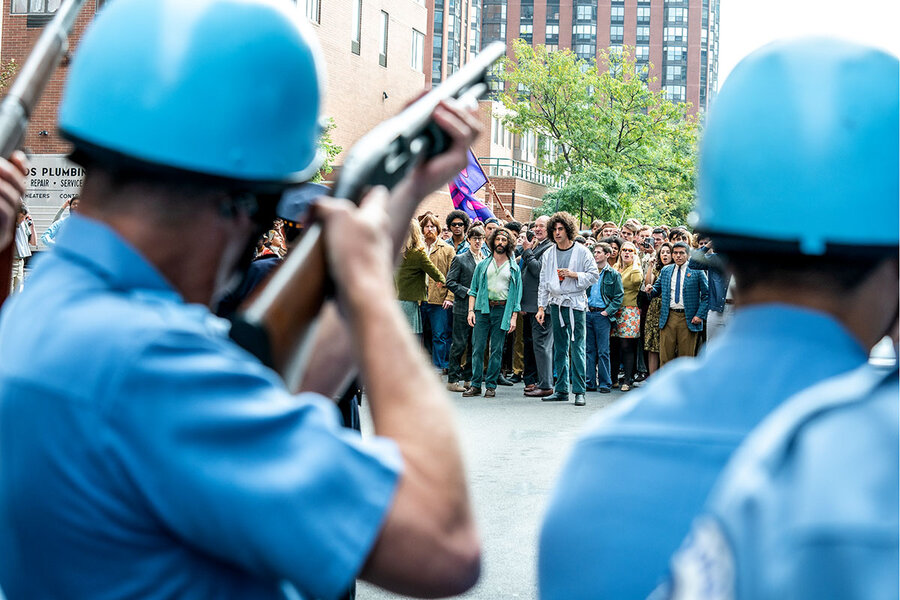 Aaron Sorkin’s “The Trial of the Chicago 7” debuts at a time when the political temperature in the United States is practically at full boil. It’s based on the notorious 1969 trial in which seven (originally eight) defendants were charged by President Richard Nixon’s Justice Department with conspiracy to incite violence in the wake of the 1968 Democratic National Convention. Although Sorkin originally wrote the script in 2007, it’s inevitable that the movie is now being promoted, rightly or wrongly, as a mirror image rendering of the civil unrest happening across the U.S.

As a writer-director, Sorkin, by his own admission, is most in his element when his characters are jabbering and pontificating in a confined space, à la his TV hit “The West Wing.” His new film often cuts away from the trial proceedings – including period documentary footage and flashbacks to the street clashes between protesters and the police and National Guard – but the meat of the action, and its best scenes, take place inside Chicago’s U.S. District Court.

Sorkin transforms the prolonged political theater into a showcase for a motley crew of provocateurs, among them, defendants Jerry Rubin (Jeremy Strong), co-founder of the radical Youth International Party (Yippies) and a prankster who looks like he might have stepped out of a Cheech & Chong movie; Abbie Hoffman (Sacha Baron Cohen), another Yippie instigator, whose courtroom antics, by design, are catnip for the media; and Tom Hayden (Eddie Redmayne), co-founder of the somewhat more temperate Students for a Democratic Society, who, amid this company, stands out as the voice of reason.

Their co-chief counsel William Kunstler is played by Mark Rylance in a distracting longhaired wig that makes him look, no doubt intentionally, like a superannuated hippie. Yahya Abdul-Mateen II plays Black Panther Party co-founder Bobby Seale, whose angry outbursts in the courtroom prompt the defendants’ nemesis Judge Julius Hoffman (Frank Langella, sounding like a testier version of his Nixon from “Frost/Nixon”) to bind and gag and eventually sever him from the case.

Sorkin draws on and often embellishes the actual trial proceedings. Some of the film’s best lines were, in a sense, already written for him. When, for example, Judge Hoffman asks Abbie (no relation) if he is familiar with the concept of contempt of court, his gleeful comeback is, “It’s practically a religion for me, sir.” Sorkin overplays the grave jollity inside the courthouse, but as beautifully played by Baron Cohen in easily the film’s best performance, Abbie is the one character whose showboating clearly fronts a deeper concern. When at one point he is asked what his price would be to call off the “revolution,” he answers simply, “My life.”

Clearly Sorkin sees the Chicago 7 as victims of the vilification of dissent. He also sees them as exemplars – this is his version of a superhero movie – and the idealization at times gets a bit sticky. (Hayden, in particular, practically comes equipped with his own halo.) For Sorkin, protest is the highest American virtue. He closes out the film with the Chicago protesters’ rallying cry: “The whole world is watching.”

We can choose to look to this film for confirmation that, even before the pandemic, things have not really changed for the better – that civil rights abuses, racial injustice, demagoguery in high places, and so much else are still rampant. But there are large differences from that time, too – the Vietnam War, for one, without which it’s inconceivable the counterculture would have arisen as it did.

It’s tempting to try to learn about America by looking at its movies. It’s also a trap. This country is too complex for that. Too much, especially in the racial realm, has been left out. As Sorkin has acknowledged in interviews, what comes closer to the truth is that American films – think of the best of John Ford or Frank Capra – can express a longing for a time that never really existed except in our fantasies. This is a different kind of American history. It’s a history of what we want to believe. For all its documentary-like aspects, “The Trial of the Chicago 7” also falls into this category. It represents the sanctification of a time and a people whose spirit Sorkin sees as our salvation.

Peter Rainer is the Monitor’s film critic. “The Trial of the Chicago 7” debuts on Netflix on Oct. 16, and is in select theaters.

As long as we’re talking