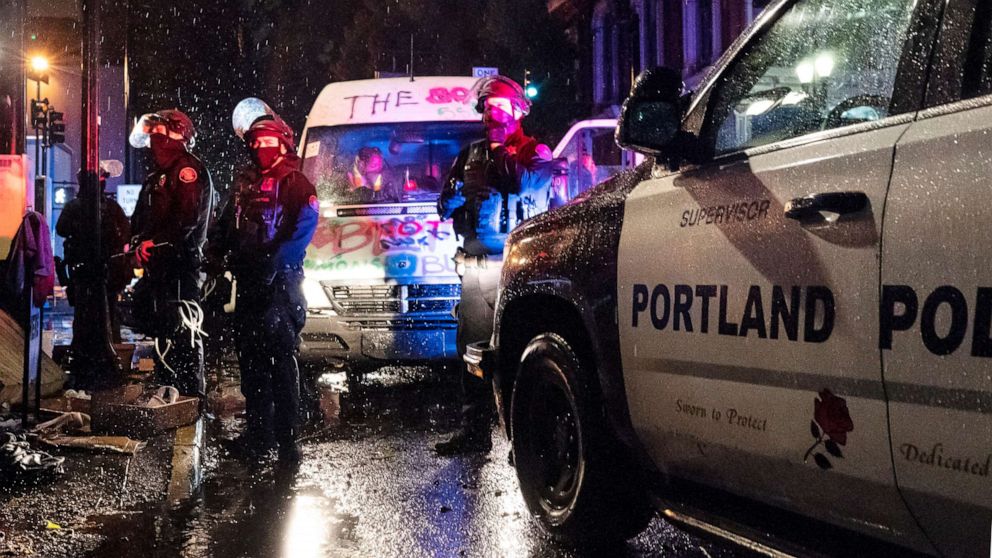 A demonstration in Portland, Oregon, that included people breaking windows and taking down statues of former Presidents Theodore Roosevelt and Abraham Lincoln has been declared a riot by police.

The protests were part of a “Day of Rage” declared over the celebration of Columbus Day on Monday. Organizers named the event “Indigenous Peoples Day of Rage” to shed light on Italian explorer Christopher Columbus’ role in the genocide of the native populations in the Americas, according to The Associated Press.

A mass gathering formed Sunday night in downtown Portland, where demonstrators used chains to topple the statues, the Portland Police Department tweeted just before midnight. The crowd also threw red paint on the Roosevelt monument, photos show, and used a blowtorch on the statue’s base, according to AP.

The statues were erected in the 1920s, and several other statues that were considered possible targets were removed, The Oregonian reported. A statue of Thomas Jefferson was pulled down by protesters in June.

About 200 people were in the crowd, according to the local newspaper.

A glass window for the Oregon Historical Society was smashed with a police officer standing inside, ABC Portland affiliate KATU reported. Windows were also smashed at the Portland State University Campus Public Safety office, according to AP.

Police warned that anyone taking part in the vandalism was subject to a citation or arrest. About an hour after their initial tweet, Portland police declared the protests a riot and instructed all those marching to disperse or else crowd control measures such as tear gas and impact weapons would be used.

The city has been experiencing months of unrest following the May 25 death of George Floyd, who died as a Minneapolis police officer kneeled on his neck for several minutes as three other officers watched on.

In early September, protesters hurled multiple fire bombs, mortars, rocks and other items and police officers on the 100th night of demonstrations in the city, Hundreds of protesters have been arrested by authorities in Portland since late May, according to AP.

Trump, who has put “law and order” at the forefront of his campaign for re-election, tweeted, “Put these animals in jail, now” Monday morning and criticized “The Radical Left fools in Portland” for not wanting “any real help.”

Lindsey Graham on the ropes? Meet Jaime Harrison, who put him there.

Donald Trump has turned the White House into a bribe factory