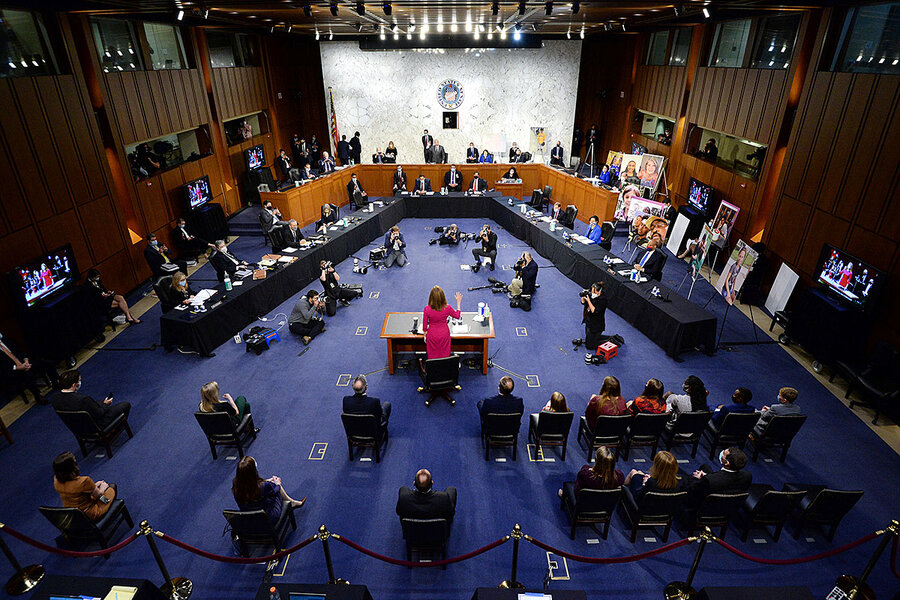 Chief among those is striking down the Affordable Care Act, which the Supreme Court is set to review beginning Nov. 10. Democrats are also particularly concerned that Judge Barrett would support overturning Roe v. Wade, the landmark case enshrining a woman’s right to abortion. An additional disclosure Judge Barrett provided to the committee Oct. 9 includes a copy of an ad she and other members of Notre Dame’s University Faculty for Life group signed calling for “the unborn to be protected in law and welcomed in life”.

“By replacing Justice Ruth Bader Ginsburg with someone who will undo her legacy, President Trump is attempting to roll back Americans’ rights for decades to come,” said California Sen. Kamala Harris, a member of the Judiciary Committee and Joe Biden’s running mate. “Every American must understand that with this nomination, equal justice under law is at stake.”

“Everyone wanted to talk to Amy”

Judge Barrett, a devout Roman Catholic who graduated at the top of her class from the University of Notre Dame law school, got her professional start as a clerk for Judge Laurence Silberman, a circuit judge of the U.S. Court of Appeals in Washington, D.C.

Judge Silberman took her and other clerks under his wing, mentoring them over the bad cafeteria food at the Department of Labor, where he had formerly worked. Her position there opened the way for her to clerk for Justice Scalia, a lion of conservative jurisprudence. He became both reviled and beloved as a leading voice for originalism and textualism, which hold that the Constitution and statutory law should be interpreted according to their publicly understood meaning at the time of passage.

The young Ms. Barrett embraced her mentor’s judicial philosophy. Yet her views were frequently sought by her fellow clerks, including those working for liberal justices who saw the Constitution as a living document that should be interpreted according to the times.

Traci Lovitt, a fellow clerk during that 1998 term, says Ms. Barrett was very good at distilling the key legal principles at the heart of a case.

“No matter what their legal philosophy was – everyone wanted to talk to Amy,” says Ms. Lovitt, now a partner with Jones Day who recalls clerks congregating around her at the long lunch tables in the Supreme Court where they would all eat together most days.

One reason for that, she adds, was that Ms. Barrett was approachable and kind – a trait not necessarily shared by all in the ultra-competitive group of several dozen top law school grads. “She would want to hear everybody’s views, talk through the critical issues, and was very respectful of everyone’s opinion,” says Ms. Lovitt, who worked for Sandra Day O’Connor and saw some cases differently than Ms. Barrett, her jogging partner. “Even if you disagreed with her, you walked away still respectful of Amy.”

By the end of the year, their jogs down the Washington Mall came to include female clerks for five different justices, including liberal Stephen Breyer.

After a stint in private practice, Ms. Barrett was recruited to teach at her alma mater. Only 30 at the time, she donned glasses to look more “imposing.” But she quickly gained respect, earning the school’s professor of the year award three times.

As she and her husband, fellow lawyer Jesse Barrett, started a family, she would keep a basket of toys in her office. With two children adopted from Haiti and five biological ones, including a son diagnosed with Down syndrome, her ability to juggle family and professional responsibilities – as well as volunteer for everything from carpooling to classroom mom to mock trial coach – has drawn a mixture of awe and disbelief. (One key help: Mr. Barrett’s aunt has pitched in on child care for more than 15 years.)

The Barretts are also reportedly members of People of Praise, a charismatic group that is ecumenical but largely comprised of Catholics. Members make a lifelong covenant to their fellow worshippers and to God, raising questions for some about whether that commitment would affect Judge Barrett’s impartiality on the bench. And even fellow Catholics have raised questions about appointing a sixth Catholic judge to a nine-justice court in a country where Catholics make up about 20% of the population but play an outsize role in the conservative legal movement.

In 2019, two years after Judge Barrett was grilled by Democratic senators in her confirmation hearing for the U.S. Court of Appeals for the 7th Circuit, she said in a talk hosted by Hillsdale College that questions about faith have no place in the confirmation process, citing the Constitution’s ban on religious tests for public officers. While the public should be “absolutely concerned” about whether a judge would be able to set aside personal preferences – be they moral, political, or religious – she added, it would be wrong to imply that “people of faith would have a uniquely difficult time separating out their moral commitments from their obligation to apply the law.”

The example of John Adams

In that same Hillsdale speech, she anchored her views about the duty of a judge in the example of John Adams, an ardent critic of British rule who nevertheless agreed to defend eight British soldiers accused of murder in the 1770 Boston Massacre when no one else would take the case.

“Facts are stubborn things,” Adams said during the trial, “and whatever may be our wishes, our inclinations, or the dictates of our passion, they cannot alter the state of facts and evidence.”

All eight soldiers were acquitted of murder, with two declared guilty of manslaughter, a less serious charge. Though Adams couldn’t have felt a lot of sympathy for the soldiers, she noted, he believed it was vital that they receive a fair trial. That lesson, she added, holds particular resonance for a judge.

“A judge is obligated to apply the law as it is and not as she wishes it would be,” said Judge Barrett, who echoed the point in her opening statement this week. “She is obliged to follow the law, even when her personal preferences cut the other way, or when she will experience great public criticism for doing so.”

Colleagues and former students praise her ability to bring out the best legal arguments on both sides of a question – a skill she has said she developed by going toe-to-toe with Justice Scalia as he prepared for oral arguments.

Chase Giacomo, a combat veteran who took a class from her in his first year of law school before transferring to Harvard, said she reminded him of his West Point professors, who put serving the country above ideology.

But Senate Democrats are deeply concerned that the appointment of a Scalia protégé would undermine the rights accorded to women, minorities, and the LGBTQ community through decades of court battles.

At the Sept. 26 Rose Garden ceremony when President Trump introduced Judge Barrett as his nominee, she said that “[Justice Scalia’s] judicial philosophy is mine, too.”

“I don’t think we’ve always had that much candor,” says Richard Garnett, a professor of law and political science at Notre Dame University in Indiana and husband of Nicole. “I think people have a pretty good touchstone for starting to approach how she would deal with both statutory and constitutional questions.”

But in her hearing today, Judge Barrett refused to answer questions about whether she would rule the same way her mentor had, including on hot-button issues like abortion, same-sex marriage, and the Affordable Care Act.

“If I were confirmed, you would be getting Justice Barrett, not Justice Scalia,” she told California Sen. Dianne Feinstein, the committee’s ranking member. “I don’t think that anybody should assume that just because Justice Scalia decided a decision a certain way that I would, too.”

Citing rules governing sitting judges such as herself, as well as Justice Ginsberg’s maxim for confirmation hearings – “no hints, no forecasts, no previews” – she declined to answer questions on how she would rule in particular cases.

Senator Feinstein expressed disappointment that Judge Barrett would not distance herself from Justice Scalia’s position on the “hard-won freedoms and protections for the LGBTQ community,” calling it a fundamental point for many Americans.

“What I was hoping you would say is that this would be a point of difference where those freedoms would be respected,” said Senator Feinstein. “You have not said that.”

Sen. Chris Coons of Delaware and others also questioned her over a 2017 scholarly article in which she wrote that in a landmark case on the Affordable Care Act, NFIB v. Sebelius, Chief Justice John Roberts had pushed the ACA “beyond its plausible meaning to save the statute.”

With another ACA case on the court’s docket next month, Senator Coons expressed concern Judge Barrett saw the statute as unconstitutional and, if confirmed according to the GOP timetable, she would vote to strike it down. She responded that she holds no hostility toward the ACA, and noted that the November case involves a different legal principle.

Both sides in the polarized debate have accused one another of seeking to use the Supreme Court to circumvent the slower process of legislative change, in which lawmakers are directly accountable to voters.

“Republicans are trying to see policy outcomes through the court that they’re not winning through the political process,” says Jeremy Parris, former chief counsel for nominations in the Judiciary Committee and a longtime senior aide to Democratic Sen. Patrick Leahy of Vermont, a member of the committee.

Sen. Joni Ernst, a Republican from Iowa, argued that Democrats were projecting onto Judge Barrett what they want justices to be: activists for the moral imperatives they believe in.

On the eve of the last presidential election, when Justice Scalia’s seat was open and Senate Republicans were standing firm in their refusal to hold confirmation hearings for Judge Garland, then-Professor Barrett was asked what she thought of Hillary Clinton’s desire for a justice who would protect minority rights and Donald Trump’s declaration that he would appoint judges opposed to abortion.

“Those kinds of answers are, I think, what’s wrong with our nomination process,” said Ms. Barrett, of candidates signaling to the electorate that they would appoint justices who share their policy preferences. “That’s not the right qualification for a justice. We shouldn’t be putting people on the court that share our policy preferences; we should be putting people on the court that want to apply the Constitution.”

As for Professor Brady, her college English teacher, the outcome of the hearings will be “painful” either way.

“I’m totally of a different [political] persuasion and I absolutely admire her,” she says. “And those things are not resolvable for me really.”

Lindsey Graham on the ropes? Meet Jaime Harrison, who put him there.