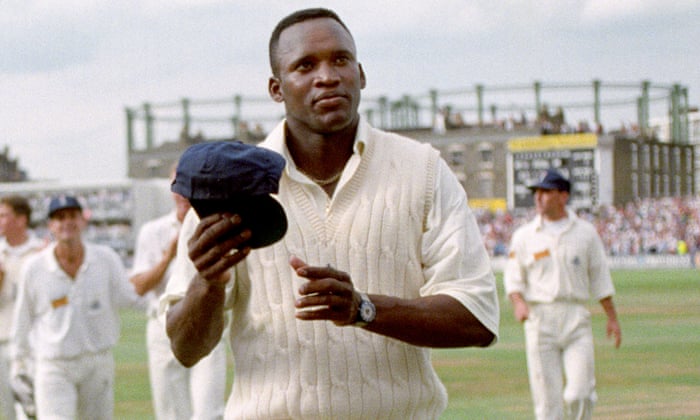 We are in the middle of Black History Month and the cricketing charity Chance to Shine has provided schools around the UK with some tools to celebrate black England cricketers. It is a very welcome pack. There are some great characters to celebrate but it soon becomes apparent that most of England’s black cricketers appeared in the 1980s and 1990s rather than in the 21st century and the most recent, Chris Jordan and Jofra Archer, came late to this country – Jordan via a cricket scholarship, Archer, who had represented Barbados Under-19s, via the encouragement of Jordan.

Roland Butcher of Middlesex was the first and I recall being one of the first to know that he was heading back to the Caribbean in the England squad in 1981, when he would play his three Test matches. Ian Botham was the England captain and we huddled around the old dressing room at Taunton early in September 1980 upon his return from the selection meeting, eager to know who had been chosen for the winter tour against West Indies. Oddly I do not recall Butcher’s selection being a massive talking point. He was Botham’s type of player: instinctive, a brilliant fielder and, on his day, a silky, destructive batsman.

Botham clearly supported Butcher’s selection, though he added: “I didn’t get everyone I wanted; but at least that Robin Jackman’s not on the tour [Jackman, the irrepressible, loquacious Surrey seamer had just taken 121 wickets at 15.40 in the summer of 1980]”. It then transpired that Jackman was summoned as a replacement for Bob Willis and by the end of what became a tumultuous tour Botham and Jackman were the best of friends – a rare occasion when Ian, I mean Lord Botham, acknowledged: “I got him completely wrong; he’s a great bloke.”

Butcher made his Test debut in Barbados – “our boy, their bat” said the headline in the local paper – but he never played for England after that tour. Recently he recalled his time with Middlesex. “Once I heard someone in the crowd shouting out: ‘There’s five of them!’ as I walked out after tea with my Middlesex colleagues. There were, at the time, five black men in that side. I don’t know if I’ve been lucky, but no player or spectator ever said anything racist directly to me. But I heard and saw things directed at other players. I don’t know why, because it just fired him up, but Sylvester Clarke used to attract the most abuse. And always in Yorkshire. They threw bananas at him. I always thought it showed just how stupid they were. The last thing you want your team to face is an angry Sylvester Clarke”. 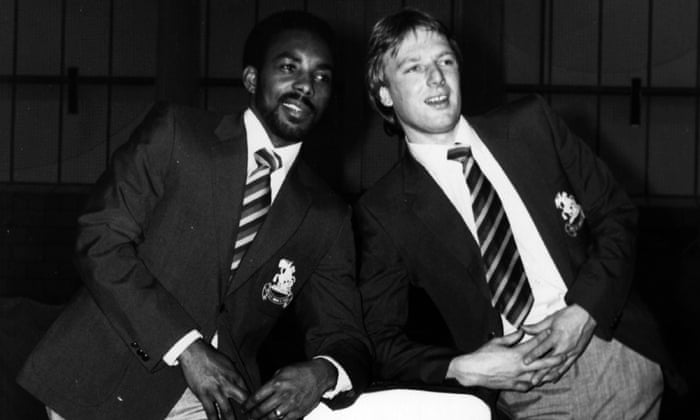 Butcher was a rare black batsman to play for England. Two decades later Mark Butcher, no relation, would be much more successful. The majority have been pace bowlers. Norman Cowans, a colleague of Roland at Middlesex, became the next black England cricketer. He was a gentle soul for a fast bowler and a naive one when he set off on his first tour at the age of 21 – to Australia in 1982. Bob Willis could not believe that Cowans departed with only one pair of bowling boots in his cricket coffin. Mind you, Bob, who had a better idea of a fast bowler’s priorities, took only one bat with him and he always borrowed someone else’s pads. Cowans grabbed vital wickets (six for 77 in the second innings) in the famous England win in Melbourne (by three runs) as did Gladstone Small (seven for 88 in the match) in a rather more comprehensive victory four years later.

Understandably the Chance to Shine teaching aides focus on Devon Malcolm, who is the only England fast bowler to take nine wickets in an innings (I’m guessing that SF Barnes lacked sufficient pace when taking nine for 103 against South Africa in 1913). When Malcolm was on the rampage against South Africa at the Oval in August 1994 he was not even a regular in the team. He had played only one other game for England that summer and he was none too sure whether he would get another when returning to the squad for the last Test of the season.

Malcolm was universally regarded as the most wholehearted of cricketers but his England career – he played 40 Tests – was blighted by a poor relationship with Ray Illingworth, who was in charge for much of the time. In his autobiography Malcolm recalls how he turned up at Lord’s in 1994 (for what would be “the dirt in the pocket” match) only to be told on the eve of the Test by his captain, Mike Atherton, that he wouldn’t be needed and that he should head off that evening to play a county game the following day. “Look, I’d like you to play here, but Illy insists,” said Atherton.

Two months later at the Oval Malcolm did not know he was playing until 10.15 on the morning of the match. He had asked his captain whether he was in the team only to receive the unsatisfactory reply: “I don’t know; the chairman [Illingworth] hasn’t arrived yet – it’s either you or Tuffers [Phil Tufnell].” It was Devon and in the second innings everything clicked as he devastated the South African lineup, taking nine for 57.

The legend has it that he was galvanised after being hit on the head by a bouncer from Fanie de Villiers. This prompted Malcolm’s “You guys are history” address to a vociferous South African slip cordon. And they were. And now, with some neat prompting from Chance to Shine, Devon’s stunning spell is also a memorable part of Black History Month.

Kenny admits there are ‘serious challenges’ amid Covid-19 pandemic