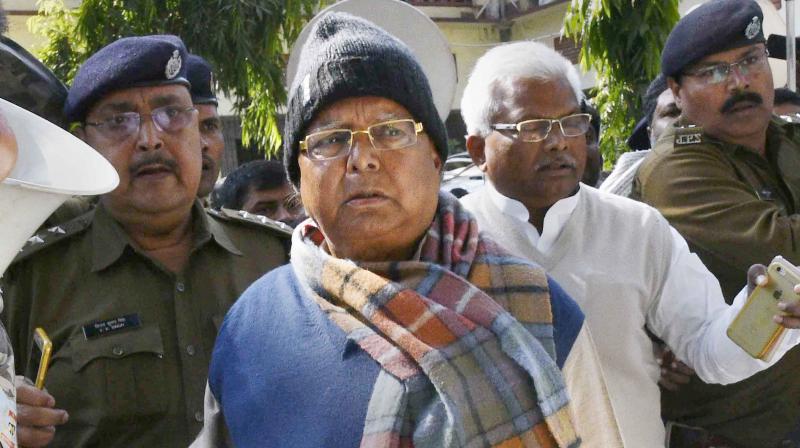 The Jharkhand High Court on Friday granted bail to RJD Chief Lalu Yadav in a fodder scam case involving the illegal withdrawal of funds from the Chaibasa treasury.

The case pertains to fraudulent withdrawal of Rs. 33.67 crore from Chaibasa treasury in Jharkhand during 1992- 93 when he was the chief Minister of undivided Bihar.

While granting bail, the Court asked him to submit two personal bonds of Rs. 50,000 each and deposit Rs. 2 Lakh. According to Lalu Yadav’s counsel “the bail was granted after he completed half of the punishment of five years in the particular case”.

They, however, added that “Lalu Yadav will remain in prison as he has been convicted in other fodder scam cases”.

Sources said that the court on Friday heard only the petition related to Chaibasa treasury while another case related to Dumka treasury is to come up for hearing on November 9.

Lalu Yadav has been languishing in jail since December 2017. He was shifted to Rajendra Institute of Medical Sciences (RIMS) Ranchi in March 2018 after his health condition deteriorated. However, recently he was shifted to Kelly bungalow on the hospital premises due to COVID-19.

The court’s verdict has come as a huge relief for the RJD ahead of assembly elections scheduled to begin from October 28. Talking to reporters in Patna RJD spokesperson Shakti Yadav said that, “the party has welcomed the court’s verdict and hopes to see him out of jail soon. Lalu Yadav is a mass leader and always raised his voice for poor and deprived”.

Political analysts recall that since 1977 this would be the first assembly elections when Lalu Yadav won’t be able to campaign for his party. In the last two elections – 2014 Lok Sabha and 2015 Bihar assembly elections he had actively campaigned for the grand alliance.

RJD chief Lalu Yadav has been convicted in four fodder scam cases estimated to have caused a loss of Rs. 950 Crores to the Exchequer during his tenure as the Chief Minister of Bihar.

The fodder scam had surfaced in 1996 and a charge sheet against 38 persons was filed by the CBI on October 27, 1997. Lalu Yadav was made one of the main accused in the case.

Trump hits Biden over unverified report on his son Hunter