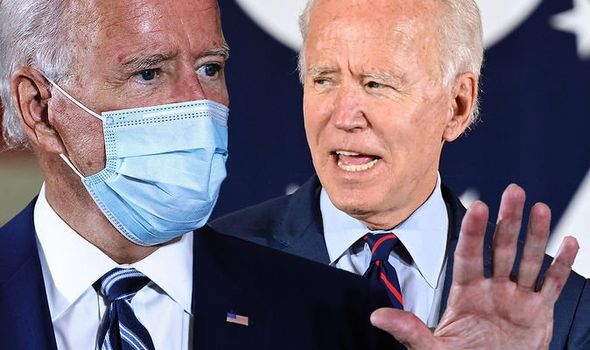 Liz Allen, senior staff member in Kamala Harris’s campaign team, tested positive for the deadly virus as did a member of crew on a flight the vice presidential candidate took earlier this month.

While Ms Harris has suspended any in-person events until Monday, the democratic presidential hopeful has been told he does not need to quarantine.

According to Sky News Mr Biden’s campaign team there’s no need for him to quarantine as he was not in close contact with them.

However, both Mr Biden and Ms Harris spent several hours together in Arizona on October 8 during several campaign stops and joint appearances in front of reporters.

During their appearances, both were masked at all times in both public an private, according to aides.

Since the flight, Ms Harris has tested negative twice for the virus and was not in close contact with either of the people who came back positive.

This means she will not need to self-isolate, according to a statement from the presidential campaign.

With the election around the corner, Ms Harris was expected to travel to North Carolina to encourage voters to cast early ballots.

But she is now suspending any travel for several days “out of an abundance of caution”.

Mr Biden has since tweeted: “During our contact tracing, we discovered around noon today that a member of the company that charters my airplane has also tested positive for COVID.

“This crew member was on the plane with me, but was more than 50 feet away.

“My COVID test from last night came back negative.”

“Not only was the individual 50+ feet away and wearing a mask, but I was wearing an N-95 mask.

“No members of my staff were in contact with this crew member either.

“My doctors have advised that there is no need for me to quarantine.

“Our campaign’s contact tracing remains ongoing, and my team will continue to share any significant developments with the American people.

“If anything, let this serve as an example of the importance of wearing masks and keeping a safe, social distance.”

“I wasn’t in close contact—as defined by the CDC—with either during the 2 days prior to their positive tests.

“I’ve had 2 negative tests this week & am not showing symptoms.”

She then added: “I will be transparent with you about any test results that I do receive.

“In the meantime, remember: wear a mask, practice social distancing, and wash your hands regularly.

“It is possible to stop the spread.”

Mr Trump and his wife both tested positive for the deadly virus two weeks ago.

The President was rushed to Walter Reed Medical Center hospital for treatment and is now receiving dexamethasone, a steroid which can be used to help treat severe COVID-19 infections.

Mr Trump returned to the White House after spending just three days in hospital after announcing he had tested positive for coronavirus.

The president’s return to the White House comes amid a spate of positive coronavirus infections amongst senior staff.

Press secretary Kayleigh McEnany confirmed she had tested positive for the virus.

CBS news claimed one of her aides has also caught the virus too.