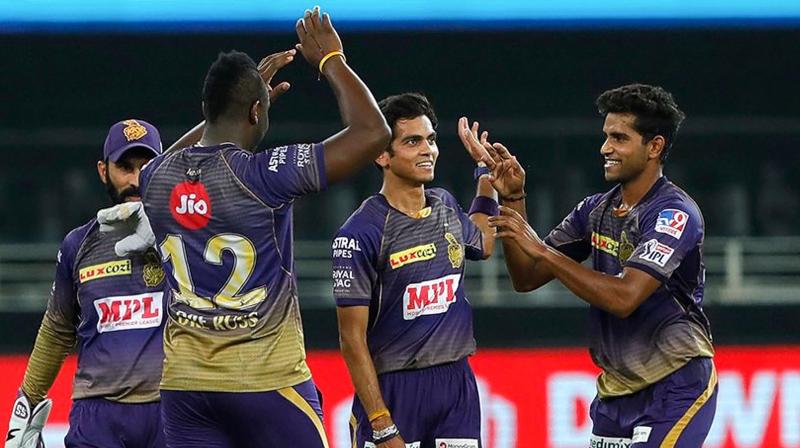 Mavi and Nagarkoti, who battled injuries in the last two seasons, claimed two wickets apiece, while Varun Chakravarthy also got two to restrict the Royals to 137 for 9 in 20 overs while chasing a target of 175.

It was Rajasthan's first loss in the tournament after it won both its previous games at Sharjah.

This was after star Australian pacer Pat Cummins (1/19 from 3 overs) dismissed Steve Smith (3) as the Royals crumbled on a tricky run chase to suffer their first defeat after two successive wins.

For KKR, this was their second successive victory and they jumped to second spot behind Delhi Capitals.

The margin of defeat would have been much bigger but for Tom Curran who remained unbeaten on 54 (from 36 balls) for a lost cause.

The casual and carefree manner of batting by the Royals top-order was baffling after Smith opted to field.

Jos Buttler and Smith started the proceedings looking to hit every ball in a 12-run first over off Sunil Narine. The in-form Smith survived a dropped catch off Cummins but perished caught-behind taking an inside-edge.

Mavi (2/20 from 4 overs) then ended the dream run of Sanju Samson (8), executing a perfect bouncer, and followed it up by getting the dangerous-looking Jos Buttler (21 off 16) dismissed after power play to have the Royals’ top three out for 39.

Nagarkoti (2/13 from 2 overs) then joined the party, picking up the wickets of Robin Uthappa (2) and Riyan Parag (1) in the space of four balls in his first over.

It was all over for the Royals after mystery spinner Varun Chakravarthy (2/25 from 4 overs) grabbed the wickets of their last match hero Rahul Tewatia (14) and Jofra Archer (6).

Earlier, KKR found a fast and furious Jofra Archer too hot to handle as they were restricted to 174 for six after being sent in to bat.

Archer (2/18) hit the deck hard and clocked the fastest delivery of the tournament (152.1 kph) in a fiery spell, taking two key wickets of KKR—in-form opener Shubman Gill (47 from 34 balls) and skipper Dinesh Karthik (1).

Archer dismissed Gill three runs short of a second successive fifty. In his next over, Archer dismissed Karthik with a beauty, full of pace that went straight with a bit of inswing and the KKR skipper was forced to play, edging straight to Jos Buttler.

Andre Russell was finally promoted up at No. 5 but the star Jamaican became victim of Ankit Rajpoot while trying to accelerate the scoring rate.

Russell’s wicket meant KKR lost four wickets for 33 runs in the back-10 and with KKR playing with an extra bowler, it was left to Eoin Morgan (34 not out) to prop up the total.