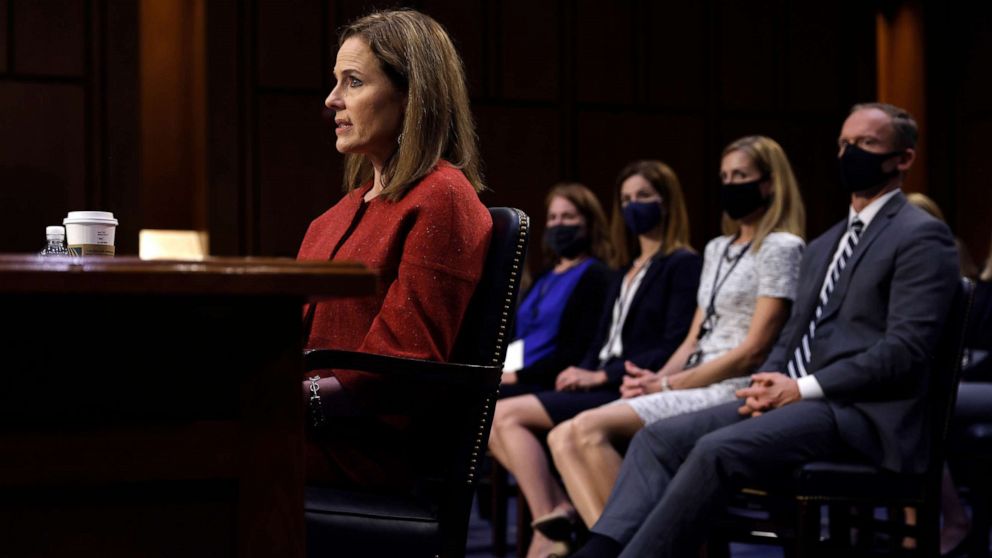 This week’s hearings for Judge Amy Coney Barrett are odd in at least one respect: They appear unlikely to influence the decision of a single senator when it comes time to vote on her confirmation for the Supreme Court.

But the hearings could matter a great deal when it comes to determining who will sit in similar rooms next year and beyond. Four potentially vulnerable Republican senators sit on the Senate Judiciary Committee on the eve of elections that look increasingly dire for their party.

That list includes Chairman Lindsey Graham, R-S.C., who opened Tuesday’s hearing with a riff about how Obamacare has been a “disaster” that he argued is laying the groundwork for Democrats to impose a single-payer system.

“That’s a political debate we’re involved in,” said Graham, in what he acknowledged wasn’t actually a question to Barrett.

Democrats on the committee include Sen. Kamala Harris, the Democratic nominee for vice president, along with a range of potential Biden administration Cabinet picks. Their goal for the week is less about changing colleagues’ minds than it is highlighting what a conservative-leaning court could mean for matters of policy.

To that end, Barrett said repeatedly that she has no predetermined position on the Trump administration’s challenge to the Affordable Care Act — a case scheduled to go in front of the Supreme Court just days after the election.

Barrett also said she would “consider” recusing herself from a case that arises from a dispute in the election.

And in one striking exchange, her care in not prejudging outcomes left her declining to say whether the president has any right under the Constitution to delay an election — a power he clearly does not have.

In hoping not to distract, Democrats did just that.

For days, former Vice President Joe Biden made clear he did not want to answer questions about the hypothetical idea of working with Congress to add seats to the Supreme Court should he win in November and Democrats take the Senate. He wanted instead to keep the focus on the way Republicans are currently working at lightning speed to rush the confirmation of Barrett.

“I’m not a fan of court packing,” Biden said Tuesday. “What I want them to focus on is the packing — court packing is going on now. Never before, when an election has already begun and millions of votes already cast, has it ever been that a Supreme Court nominee was put forward. Had never happened before.”

But Biden and his campaign seemed to make sure the questions kept coming. And Republicans piled on as they, of course, liked anything that turned attention away from the extreme flip-flopping and rule-breaking they engaged in to put their picks on the court.

“My understanding of what former Vice President Biden said is that he is watching this process — and he watched the process in which Merrick Garland was denied any hearing or any vote — and (he) looks at that and says, ‘the Republicans have played fast and loose with the rules in order to jam two partisan nominees onto the court that is the equivalent of packing the court with folks by coloring outside the lines,'” Sen. Chris Coons, D-Del., said.

The TIP with Benjamin Siegel

Americans are already voting early in Ohio and Texas, but that hasn’t stopped the legal disputes over the use of absentee ballot drop boxes for voters to return their ballots.

In Texas, a federal three-judge panel has reinstated Gov. Greg Abbott’s policy limiting each county to a single drop box, while the Sixth Circuit Court of Appeals has done the same for guidance in Ohio from Secretary of State Frank LaRose, a Republican who has argued that he is constrained by state law from allowing counties to install multiple drop-off sites for ballots.

Democrats and civil rights advocates who brought both cases argue that the limited number of drop boxes disenfranchises voters — particularly in densely population areas like Harris County, Texas, where only one drop box will service millions of potential absentee voters.

And in California, Democratic Attorney General Xavier Becerra and Secretary of State Alex Padilla are warning Republicans to stop their use of unofficial ballot drop boxes in several counties, warning that county elections officials are the only entities that can deploy official drop boxes, even though it is legal to collect and turn in other voters’ ballots.

The continued fight over drop boxes — a well-regarded mainstay in Western states like Colorado, Utah and Oregon that are now in use in dozens of states as a result of pandemic-related changes to voting — could add more confusion and chaos to the election.

Lalu Yadav gets bail in Chaibasa treasury case, remains in jail for another scam