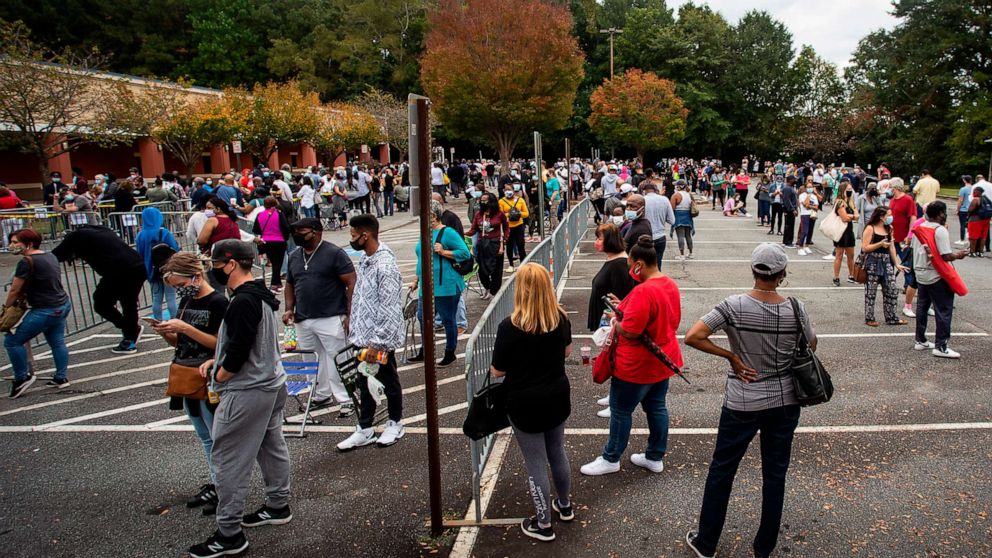 Former Vice President Joe Biden and President Donald Trump will both face voters Thursday night — albeit not in the way envisioned by the debate commission or really any actual voters.

But however the collective audience sorts through an unusual evening, with Biden at an 8 p.m. ET ABC News forum in Philadelphia, and Trump at a competing event in Miami on NBC, voters are voting — lots of them.

Records for this far out from Election Day are being set virtually by the hour and in virtually every state. Nationwide, more than 16 million ballots have already been cast, nearly five times the number logged at a similar point in 2016, according to records compiled by the most prominent authority on early voting, Michael McDonald of the University of Florida.

In Georgia, more than 537,000 mail ballots have already been accepted and returned, compared to some 200,000 in all of 2016. The start of in-person voting there brought hours-long lines this week; there have been similar scenes in Texas, where more than half a million voters showed up on the first day available to vote.

It’s too soon to extrapolate particular outcomes out of the interest in voters casting ballots early. Polls indicate a huge pre-Election-Day edge for Biden, and a sizeable Trump advantage among those who plan to vote on Nov. 3 itself.

Regardless, for all the noise around election integrity and distaste for politics generally, votes are pouring in. Biden and Trump are engaging with voters who have not only mostly made up their minds, but are acting on it every minute of the next 19 days.

Director of the National Institute of Allergy and Infectious Diseases Dr. Anthony Fauci reassured Americans that he examined President Donald Trump’s COVID-19 test data, including one done at a government lab, and concluded the president is “no threat to transmit the virus to anybody else.”

But as the president ramps up his in-person campaigning, Fauci acknowledged the simple fact that the president does not travel alone.

More than three dozen people with ties to the White House or White House events have tested positive for the coronavirus in the last two weeks, including several working with the president’s campaign.

During his interview Wednesday with CBS, Fauci also threw cold water on the president’s suggestion that all Americans should be able to receive the same cutting-edge antibody treatment that the president received. Fauci confirmed that the federal government right now is looking at “hundreds of thousands” of doses, not “hundreds of millions” of doses.

On the vaccine, he reiterated that 100 million doses are expected to be manufactured by the end of the year and enough doses for all Americans by April. That timeline depends on all six manufacturers getting an emergency use authorization.

Nearly 30,000 voters in the Pittsburgh area were sent the wrong ballots due to an error made by the company contracted to handle printing and mailing ballots, officials announced Wednesday. The error caused voters to receive the ballot meant for the voter whose name was next to theirs in the system. The vendor, Midwest Direct, fixed the issue and began printing new ballots Tuesday. Most of those new ballot packets are expected to be delivered sometime next week.

This is just the latest mail ballot mishap this election. In late September, at least 100,000 voters in Brooklyn, New York, received absentee ballots with the wrong name and address printed on the return envelope. If those voters returned their ballots in the incorrect envelopes, their votes wouldn’t be counted. The New York City Board of Election decided to re-send ballots to any voter who may have been affected by the error.

Within a day, Trump pounced on the New York story, tweeting, “Wow! 100,000 Mail In Ballots in New York City a total MESS. Mayor and Governor have no idea what to do. Big Fraud, Unfixable!”

This is still fixable with 19 days until the election, but it doesn’t make already stressed election officials’ jobs easier. In Allegheny County, which includes Pittsburgh, election staff must manually locate and separate out the ballots already returned from the affected voters. They’ll also have to make sure there’s no double voting and the county sought to preemptively assuage any concerns on that front.

“Only one ballot will be counted for each voter,” David Voye, manager of the Allegheny County’s elections division, said in a statement. “Voters in this county should be confident that their votes are accurately counted and protected.”

With less than three weeks to Election Day, Democratic nominee for president Joe Biden will face voters directly in an ABC News Town Hall from the National Constitution Center in Philadelphia on Thursday night. Check here for live updates throughout the day.

ABC News’ “Powerhouse Politics” podcast. One of the leading members of The Lincoln Project, a political action committee comprised of anti-Trump former Republican political strategists, took aim Wednesday at the president’s support on Capitol Hill, describing some senators’ enablement of Donald Trump as “a deep sickness,” while defending his organization’s work to defeat them in down-ballot races. “How do you not try to purge a party of people who say nothing when the president of the United States says he didn’t rape a journalist because she wasn’t ‘my type’? What do you do about people that really are quiet when the president of the United States is refusing — and the vice president — refusing to accept the results of an election?” Stuart Stevens, a senior strategist for Sen. Mitt Romney’s 2012 presidential run and a veteran of countless GOP campaigns, told ABC News Political Director Rick Klein and Chief White House Correspondent Jonathan Karl. https://bit.ly/3jXffaT

Will there be another Trump surprise in Michigan?

‘A deep sickness’: Former Republican strategist sounds off on ‘Trumpism,’ compares it to segregation

Chris Christie says he was in ICU for 7 days battling Covid-19, urges Americans to wear masks