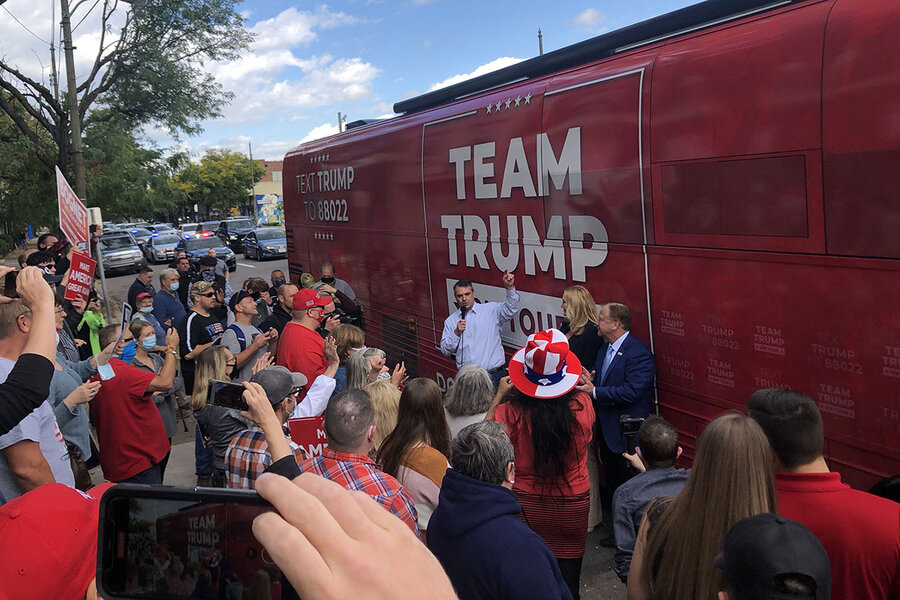 As COVID-19 continues to upend everyday life in America, it has also disrupted campaigning – forcing presidential and down-ballot candidates alike to reevaluate once-routine forms of politicking. Everything from speeches and rallies to door knocking and handshaking now comes with a cloud of complications and a cost-benefit analysis.

Yet there’s a clear partisan split. Taking cues from President Donald Trump – who has resumed a jam-packed schedule of MAGA rallies after being sidelined by a COVID-19 diagnosis – many Republican candidates returned to the trail in early summer. By contrast, Democrats from former Vice President Joe Biden on down have been much more cautious, with some only just now beginning to hold small events and go door to door.

The diverging approaches serve to reinforce the two sides’ core arguments, points out Melissa Michelson, a political science professor at Menlo College in Atherton, California, who has studied get-out-the-vote methods for decades. “By not engaging in door knocking, or minimal door knocking, Democrats are sending a message – reminding people that we are in a pandemic.”

Republicans, on the other hand, are trying to emphasize a return to “normal” life.

“We see among Republican and independent voters, they still want to be talked to,” says Mr. Bognet. “They still appreciate it when we go door to door. And I just think the Democrats are making a horrible mistake by giving [that] up.”

After months of mostly virtual campaign events, Mr. Biden recently embarked on an 8-stop train tour around Ohio and Pennsylvania, de-training to speak to small, socially distant crowds. Biden volunteers are just now beginning to knock on doors of voters who have been hard to reach by phone in the swing states of Nevada, Michigan, New Hampshire, and Pennsylvania – the first such efforts since the spring.

By contrast, the Trump team claims to have already amassed impressive canvassing numbers. According to a campaign spokesman, the campaign has knocked on over 22.5 million doors to date, with a current average of 2 million doors per week (though figures like these are impossible to independently verify).

In some ways, 2020 is offering a kind of real-life political science experiment: Just how much does face-to-face contact with voters actually matter?

Biden campaign manager Jen O’Malley Dillion has tried to reassure nervous Democrats that what’s important isn’t sheer numbers of doors knocked on, but meaningful conversations with voters – which she says have been easier than ever to have on the phone, with so many Americans stuck at home and on their devices.

“Our operation has been highly successful when it comes to the most important metric, which is quality conversations,” a senior Biden official tells the Monitor. In the month of September alone, the campaign held 5.9 million of these conversations, the official says.

The Biden campaign has employed various virtual tactics, from social media to Zoom rallies to mailing postcards. And they have experimented further with peer-to-peer organizing, in which supporters text or call their own friends and family – a method political scientists rank as highly effective.

Still, face-to-face interactions typically allow for more in-depth conversations than phone calls or texting. Compared with other campaign tactics, in terms of both cost and success in generating votes, in-person canvassing comes out looking “pretty good,” says Donald Green, a political scientist at Columbia University and author of the book “Get out the Vote!” with Alan Gerber. On average, they calculate that connecting with 1,000 voters via door knocking generates 40 votes, while talking to 1,000 voters on the phone generates 28.

“It all depends on the quality of the interaction,” Mr. Green adds. “We may find that virtual friend-to-friend [contacts] may be more effective than a stranger at your door. … It’s kind of too early to tell.”

Knocking on doors – in a mask

With an umbrella hanging from his waist and a stack of campaign flyers in his pocket, Andrew Holter, a conservative running for the state legislature in Pennsylvania’s District 118, walks from house to house under a drizzling rain in Duryea, a town south of Scranton. He’s following a map of potential supporters on his phone; many of the homes he approaches have lawn signs for President Trump or other Republican candidates.

Wearing a black face mask that says “We the People,” Mr. Holter knocks on a door – firmly, but not aggressively – and then steps backward off the house’s porch. If the homeowner answers, Mr. Holter, a paramedic firefighter, introduces himself and gives a one-minute version of his stump speech, explaining what he would do differently from the incumbent, such as investing more in emergency services.

One young woman listens from inside. “I really appreciate you being out here and taking the time to talk to people,” she says, before offering him a friendly wave and returning to her barking dogs.

As the number of swing voters has shrunk in America, canvassing activities in recent years have tended to focus more on turnout, making sure the candidates’ supporters show up on Election Day. A 2017 study by two political scientists found that door knocking can persuade undecided voters in a primary election, but has little to no effect winning over new supporters in general election campaigns.

Still, Mr. Holter knocks on a few doors that he knows are home to registered Democrats, and even one with a sign for his opponent. When a woman answers, she listens quietly to his short speech and takes his flyer before giving a quick wave and closing her door.

“This is the moment you get to change someone’s mind,” says Mr. Holter, who estimates he’s spoken with at least 600 potential voters when going door to door. “It’s the difference between them continuing to vote down the ballot when they might have just checked the top boxes and then moved on.”

Ironically, until this year, Democrats were regarded as stronger when it came to field operations. The Trump campaign reportedly required its full-time staffers to read the book “Groundbreakers: How Obama’s 2.2 Million Volunteers Transformed Campaigning in America,” about the Obama campaign’s 2008 and 2012 on-the-ground efforts.

In 2018, extensive in-person canvassing was partially credited with helping Democrats win back a majority in the U.S. House.

In a recent episode of the podcast Pod Save America, former Obama campaign manager David Plouffe said Democratic candidates this year have been constrained to some extent by the concerns of their voters, who polls show are more worried about the virus than Republicans. “Most people who would be targets for door knocking don’t want someone at their door,” he said.

“But it makes me nervous,” Mr. Plouffe added, saying he found door knocking to be the best form of voter contact during the Obama campaigns. For some voters, “that may be the only way you get them to register or maybe the best way to convince them to turn out.”

In part because of concerns like these, the Biden campaign is now carefully stepping up its efforts, sending out several hundred volunteers to canvass last week, according to the Biden official. All volunteers are provided with protective equipment and temperature checks, and homeowners receive texts beforehand so they know to expect a knock on the door.

Republicans have been quick to level charges of hypocrisy, after Democrats spent months criticizing the Trump campaign for supposedly endangering its voters with in-person events.

“For months, Joe Biden and his campaign suggested door knocking would put people ‘in harm’s way’,” says Samantha Zager, Mr. Trump’s deputy national press secretary. “But now that Biden realized he can’t win an election from his basement and without a field operation, his campaign’s hypocrisy is on full display.”

Campaigning during a pandemic: ‘It stinks’

Of course, it isn’t just Democrats who’ve had to restrict their campaigning in various ways this year. GOP Rep. Dan Meuser of Pennsylvania’s 9th District says roughly three-quarters of his campaign events have been canceled, postponed, or moved to Zoom.

“We’re doing some door knocking, but less than we would have,” he says. “We’re following the appropriate guidelines.”

Congressman Meuser’s challenger, Democrat Gary Wegman, sums up campaigning during a pandemic in two words: “It stinks,” he says, from a picnic table on his family farm in northeast Pennsylvania.

Still, if there are any positives to this unprecedented election season, it’s that voters across the political spectrum appear to be tuned into politics like never before.

“People are looking at their representatives like they never have,” says Mr. Wegman’s campaign manager, Mallie Prytherch. “They’re saying, ‘What are you doing for us?’”

Ms. Prytherch says she has more volunteers offering to help than she knows what to do with. And if deciding not to risk the health of supporters and volunteers with in-person events ultimately costs the campaign votes, she says she’s OK with that.

Above all, she suspects this election will inevitably change what political campaigning will look like in the future.

“Of course, it’s been very different to campaign with the pandemic – but I don’t think that necessarily means it’s been worse,” she says. Campaigns were already heading toward a much more targeted, digital approach anyway, she notes. “This has just kind of accelerated that process.”

The 1 big problem with 2 town halls