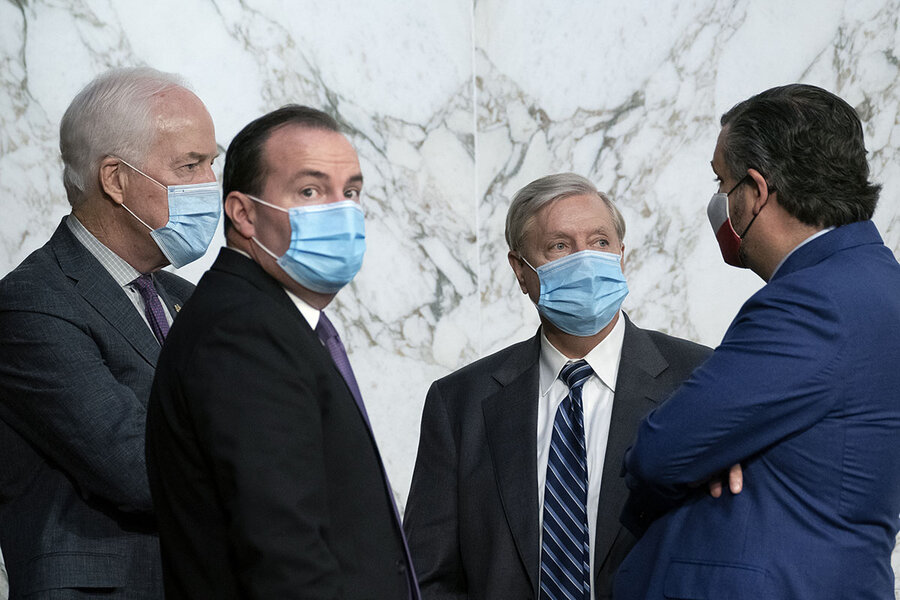 “At every turn over the last 50 years, each party has used the tools at its disposal to fight over the control of the court, and I don’t think that’s changing,” says Gregg Nunziata, former chief nominations counsel on the Senate Judiciary Committee and former policy adviser to Republican Sen. Marco Rubio of Florida.

At the Kavanaugh hearing, Senator Graham, boiling over with anger, hollered that “this is the most unethical sham since I’ve been in politics …!” Democrats this week have charged the same thing – albeit in a more measured manner.

Presidents are fully within their constitutional rights to nominate a justice at any time in their term. But Democrats have sharply criticized the rushed process, meant to confirm Judge Barrett before the Nov. 3 election, calling it “illegitimate” and a “sham” as millions of Americans are already voting. They’ve slammed Republicans as hypocrites for refusing to even consider President Obama’s nominee, Merrick Garland, because a presidential election was coming in eight months. “The people should decide” who would pick the nominee, the GOP said at the time.

Why GOP lines up for Barrett

Throughout American history, presidents have sought to put their stamp on the high court, and that has led to some big battles, reminds former Senate historian Don Ritchie. Thomas Jefferson for instance, tried and failed to impeach a Federalist justice appointed by George Washington. Franklin D. Roosevelt tried and failed to pack the Supreme Court with more justices in order to protect his New Deal legislation.

When it comes to the courts, “there have been periods of polarization, but in recent years, it’s gotten much worse,” says Mr. Ritchie.

A big reason is that the courts have been deciding some of the most contentious issues that divide Americans and affect everyday lives – health care, abortion, gun regulation, and gay marriage, among others. Indeed, Democrats have pointedly questioned Judge Barrett, the ideological opposite of Ruth Bader Ginsburg, on all of these issues.

At the same time, the political parties have evolved into more or less monolithic groupings of conservatives and progressives, rather than the ideological mixtures of old that lent themselves more easily to negotiating across the aisle to get things done. Also, beyond qualifications and character, judicial philosophy and ideology of nominees has become much more of a factor.

All of this explains why, as Chairman Graham observed on Monday, Republicans on the committee will line up for Judge Barrett, and Democrats won’t – and why Republicans backed President Trump’s nominee even before she was announced.

In the Senate, the judicial battle that ignited today’s war was the nomination of Judge Robert Bork to the Supreme Court by Republican President Ronald Reagan in 1987. He was, as Mr. Ritchie recalls, “a human barbed wire, who offended a lot of people” by carrying out President Richard Nixon’s orders to fire special prosecutor Archibald Cox, who was investigating Watergate, and by his comments about rolling back Supreme Court civil rights rulings. Like Barrett and her mentor, Justice Antonin Scalia, he was an “originalist” who believes the Constitution should be interpreted as written at the time.

It was a contentious hearing that eventually ended in his 58-42 defeat, and set the stage for partisan escalation: filibusters to block the appointment of federal judges by presidents in both parties, subsequent backlogs of appointments, and eventually the detonation of “nuclear options” to blow up those backlogs and the filibusters that allowed them, by requiring only a majority vote for approval. The first one was set off by Senate Democrats in 2013, and applied only to lower court and executive nominees; the second by Republicans in 2017, to include Supreme Court nominees.

As Mr. Nunziata describes it, the nuclear option was a “brute force mechanism” imposed by a bare majority of the Senate on a body that does not traditionally operate by the maxim of majority rule, as does the House. The more deliberative Senate is often described as the “cooling saucer” for the House, but that could change if Democrats gain control of the Senate and do away with the filibuster altogether, allowing legislation to pass by majority vote.

“If taken to its logical conclusion, all minority rights of the Senate could fall, and [it could] become a legislative body like the House, operating on the brute strength of the majority,” Nunziata says.

Will Senate still be special?

Not everyone agrees with that scenario. Even if Democrats did kill the legislative filibuster, the Senate would retain many of its special characteristics.

For instance, senators are elected every six years instead of two, giving them a longer view. Some represent swing states, with no guarantee that they will always fall in line. A two-thirds majority is required to override a presidential veto, approve treaties, and convict in an impeachment trial. Meanwhile, individual senators can still muck up the works by, for instance, refusing to grant unanimous consent – required for so much of Senate business.

“I don’t really expect the Senate to turn into the House,” says Sarah Binder, an expert on Congress at the Brookings Institution and a professor of political science at George Washington University.

What Dr. Binder and others foresee, though, is a Senate with partisan policy swings: aggressive legislating, particularly if one party controls the Congress and the White House, followed by attempts to undo those laws when the other party takes control. Think of the passage of the Affordable Care Act, which has been followed by at least 70 Republican attempts to repeal it.

Rather than reflecting compromise, with something for everyone, legislation would have a “love it” or “hate it” quality to it, suggests Mr. Ritchie.

“I don’t think the republic would collapse, but the Senate would be a very different body,” ventures Mr. Ritchie, noting that the Constitution never included the filibuster. “I can’t say it would be better or worse, but it would be different.”

Opinions range, too, on the implications of a larger Supreme Court. The Constitution doesn’t stipulate how many justices should sit on the court. It’s been nine since 1869.

Some judicial experts, like Nunziata, believe packing the court would politicize it, especially in the eyes of the public. He fears, as Joe Biden has speculated in the past, that there would be a tit-for-tat response by the other party in a subsequent election to add even more justices.

Dr. Binder says there’s uncertainty about what a larger court would mean. She’s not sure it’s the danger that some suggest.

She sees the move of adding seats, which she calls “court curbing,” as a move to protect the status quo.

“It eliminates most likely the fear of the immediate unraveling of decades of jurisprudence which have protected a whole range of individual rights,” she says.

Joe Biden is a Senate institutionalist, and this week – after saying he would not comment on court packing until after the election – he told a Cincinnati broadcaster that he is “not a fan.” When Republican Sen. Mike Lee of Utah attacked court packing in this week’s nomination hearing, Sen. Dick Durbin of Illinois, the second ranking Senate Democrat, told reporters “there’s no active conversation, or deliberation about any changes in court composition.”

However, the former vice president seems to have warmed to getting rid of the legislative filibuster, an idea he opposed as recently as February. He told reporters in July that it would depend on how “obstreperous” Republicans become in blocking legislation in Congress.

And then, too, there are those Democratic senators from purple states. Might failure to pass some major legislation, say on climate change or immigration, unite them? Possibly. Would an early Supreme Court decision striking down the Affordable Care Act bring them in line? Again, that’s a possibility. But what about public opinion? That worked against FDR’s court packing plan, for example.

Still, underneath these debates, the partisan divide reflected in the procedural arms race continues. Both parties have talked about getting rid of the legislative filibuster in the recent past. Now, many Democrats sound ready to take that fateful step.

“The question is not, should Democrats pack the courts,” says Jeremy Parris, the former Democratic counterpart to Mr. Nunziata on the Senate Judiciary Committee. “The question is, what are the Democrats going to do to respond to right-wing court-packing?”

Republicans, he charges, continue to push an unpopular policy agenda through the courts.

“If Republicans continue to abuse their power this way, it may be that we have no choice,” Mr. Parris says.

And if Republicans lose this election for failing to work through problems such as the pandemic, and then continue to block legislation even as a Senate minority, Mr. Parris is resolute: “Then we do away with the filibuster.”

Amid a pandemic, Republicans become the new door-knocking warriors