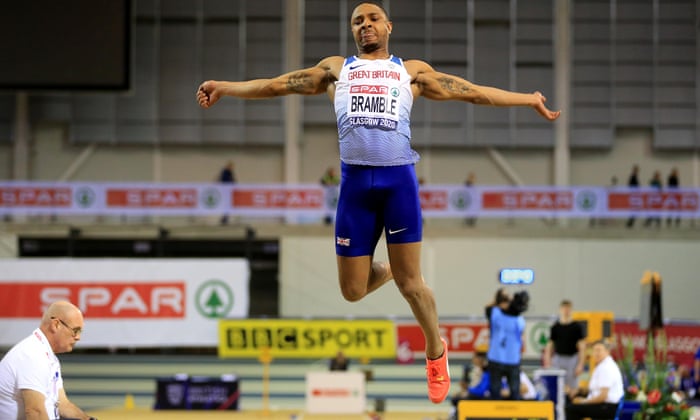 A British long jump champion who had to work for Amazon after suffering financial problems during the pandemic has been told he can “quit delivering parcels and get back to delivering gold” after a crowdfunding campaign revived his Olympic dreams.

Dan Bramble, who won the British indoor title this year and has a personal best of 8.21m, said he had been left “speechless” by a £8,875 donation from the Gymshark clothing company that had enabled him to hit his £12,000 target to fund his living and training expenses for the Tokyo Games.

Bramble, who turned 30 on Wednesday, had posted a picture in his Amazon courier uniform in which he admitted: “This year really went from ‘Road to Tokyo’ to ‘At the end of the road turn left.’ Being unfunded/unsupported really took its toll this year. But you’ve got to adapt or be extinct.”

That message was seen by Gymshark who, after helping Bramble to reach his target, alerted him by a Twitter direct message which the long jumper later posted.

“We hope you’re well and had a good birthday yesterday!” it read. “We wanted to know that we saw your tweet and were super inspired by your story. We knew we had to achieve your dream in any way we could and thought we’d start by making a donation to your gofundme page, so you can quit delivering parcels and get back to delivering gold. We look forward to seeing you in Tokyo.”

🤯🤯🤯🤯🤯 my head is gone. Thank you so much @Gymshark 🙏🏾. Best belated birthday present ever (sorry mum) pic.twitter.com/iLejVLoXvg

Bramble missed out on the Rio Olympics by one centimetre in 2016 after injuring himself before the trials.

“From one silly tweet about a crappy summer, that I nearly didn’t send?! I’ve reached my Go Fund Me goal. Honestly, I don’t know what to say. I’m not a crier but boy … thankful.”

In a later tweet, which has been liked by more than 20,000 people, he wrote: “My head is gone. Thank you so much Gymshark. Best belated birthday present ever (sorry mum).”

Major disparity in the impact of Covid-19 on the Irish economy, report warns