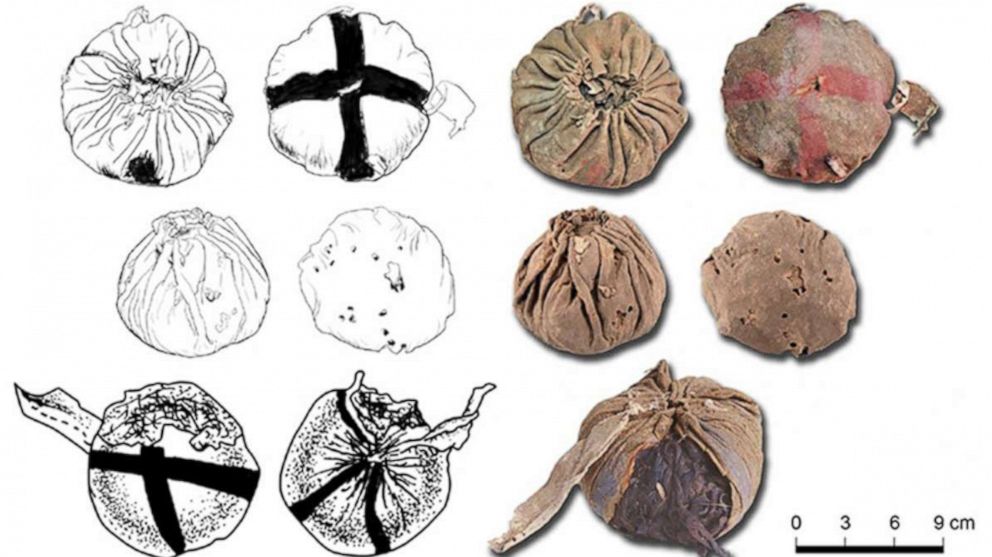 Balls found in the ancient graves of horse riders in northwestern China reveal evidence of a 3,000-year-old sport. These fist-sized balls, made of leather and filled with hair and other soft material, predate any balls found in Eurasia so far.

“It is likely that the three balls were used in a team sport,” said Patrick Wertmann, an archeologist at the University of Zurich in Switzerland. He is one of the authors of a study published recently in the Journal of Archaeological Science: Reports.

The oldest known ball in the world is a toy made of linen rags and string that was found in an Egyptian child’s tomb dating to about 2500 B.C. In highland Mesoamerica, evidence shows that ball games were played starting at least as far back as 1650 B.C., based on the finding of a monumental ball court, though the oldest rubber ball found in the region dates to about 1600 B.C.

In Europe, the oldest depiction of a ball game — a field hockey-like match in Greece — dates to about 500 B.C. The oldest ball in China known before now dated to about 200 B.C., Wertmann said.

The new research found balls in three separate tombs near the modern city of Turfan in the Xinjiang Uygur Autonomous Region in northwestern China. The three graves date roughly from 1189 B.C. to 911 B.C., based on the way the tombs were built, the artifacts found inside and radiocarbon dating. The area was part of the Yanghai cemetery site, a group of about 3,000 graves first discovered in the 1970s by archaeologists in China. Of the 531 graves that have been excavated since 2003, those of three males each carried one of the balls analyzed in this study.

One of the three graves held the remains of a 40-year-old man with colorful wool pants. Wertmann’s colleagues believe the pants, which are especially suitable for horse-riding, are the oldest trousers ever known in the world.

The pants man and the remains of another adult man were both buried with composite bows, sheaths and riding equipment. The third grave was heavily looted but contained the remains of an adult male with tattoos on his hand.

The balls themselves are about baseball-sized, with leather coverings tied together with a band and soft insides made of hair and other material. The balls are similar to much younger balls, including one described in a Chinese text dating to 195 A.D.

Wertmann said that the researchers are convinced the balls were part of a game, but they can’t say for sure what the sport was. The three balls found in Turfan have red crosses on them, similar to balls found in Tang Dynasty tombs from the 7th and 8th century A.D. Those balls were likely used in a polo-like game, so it’s possible that the balls found near Turfan were used for polo about 3,000 years ago as well.

But Wertmann is careful not to come to that conclusion outright since they didn’t find sticks in the same graves as these three horse riders’ remains, even though other graves in the Yanghai cemetery dating to roughly the same time period had curved sticks.

Jeffrey Blomster, an anthropologist at George Washington University who recently did a study on the earliest ball court found in Mesoamerica but was not involved in Wertmann’s research, applauded the authors’ cautious take and agreed the jury is still out on whether these balls were associated with polo.

But he thinks the fact that all three balls are about the same size is one of the most interesting parts of the story, and something the researchers didn’t focus on in the paper. For Blomster, this consistency strengthens the idea they were used for a game or sport.

Wertmann said these findings reveal more about the ancient Chesi culture that inhabited this region at the time. The people lived in tents, tended livestock and were good archers, according to historical sources. The 40-year-old pants man is particularly notable.

“We do not know the exact identity of this man, but when we consider also some of his other burial items, such as a horsetail decorated with colorful bands and a tassel and of course the leather ball marked with a red cross, we may imagine that he enjoyed a special status in his community, perhaps of an excellent ball player who had to be remembered,” Wertmann said.

But the finding also reveals more about the history of ball games in general. In this period, the games may have been played just as horse warfare and other large social changes were arising in Eurasia.

“Ball games, which were considered as an excellent form of physical exercise and important means of military training since ancient times, were part of this development from the very beginning,” Wertmann said. “Sports must have been central to the social life of the people.”

‘Intoxicating’: These new cars offer what no Tesla can

Why this sci-tech journalist ditched his smartphone