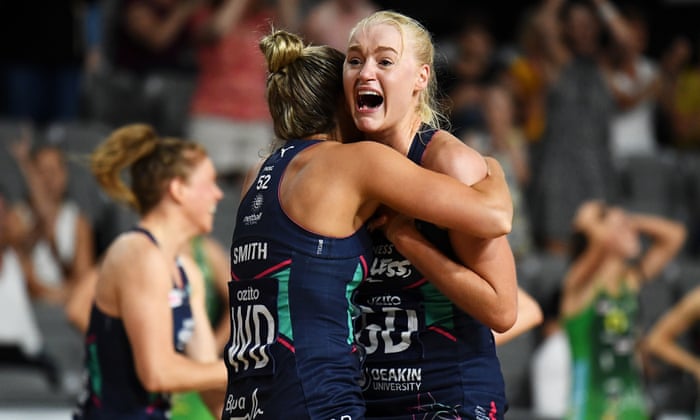 The Melbourne Vixens claimed their first Super Netball title with a narrow victory over West Coast Fever in a thrilling grand final that went all the way down to the wire.

The Vixens ran out 66-64 winners at Nissan Arena in Brisbane to become the first minor premiers to go on and win the championship at the conclusion of a rollercoaster season that was seriously challenged by the Covid pandemic.

Recent history had pointed towards another tight contest between the two best teams this year – two of their last four meetings had ended in stalemates – and so it proved again as the identity of the 2020 champions remained unknown until the dying moments of the decider.

The Vixens’ win was dedicated to Victorians who have been in lockdown due to the pandemic. “We really hope we’ve brought some light to you guys,” the retiring Caitlin Thwaites said. “We know it’s been really hard for you.”

Vixens coach Simone McKinnis was “relieved, exhilarated, everything in between”, emotions reflecting her side’s 93 days in the Queensland hub.

“We said right back at the start if they start talking about, ‘it is not a full-on season’ – it was one of the toughest seasons in every way possible, and I knew that we wanted to be the toughest competitors in this competition.”

The Vixens trailed by a single point at quarter- and half-time before taking the lead heading into the final term and, had Alice Teague-Neeld not missed a late super shot, the Fever would have led with one minute to play.

As it turned out, that was about the length of time a clock-watching Melbourne passed the ball around their own circle, back and forth until it was safe to take a final, fruitless centre. Player of the match Mwai Kumwenda (47/50) missed a super shot on the buzzer but by then the score was settled.

In a match of this calibre, a two-pointer’s market value would have been well worth the investment. A reluctance from both sides to risk it – a total six were scored from 13 attempts, including a cracker from Jhaniele Fowler (54/55) right on half-time – perhaps signified the high stakes. That was the long and short of it – go short, not long.

The exception was feeding, and long, high balls into the circle were a regular occurrence. It suited the dynamic Kumwenda who, between tying an insistent Courtney Bruce in knots, teetered gracefully on one leg to keep balls in play. This was the Malawi international’s most impressive outing all season.

For Kumwenda’s MVP honours, this was an affair replete with individual excellence. Jo Weston was a relentless second-half force, swooping for an at-the-death rebound and playing a reliable support act to Emily Mannix’s unenviable plot to take down Fowler. Kate Eddy, back from a foot injury, took a tremendous intercept under pressure as the Victorians opted for one-on-one grit.

Verity Charles’s midcourt movement was as charming as it was conniving, barely requiring a glance in Fowler’s direction to hit her target. Thwaites, for her part, potted a super shot with less than three minutes left, doing her bit to ensure a fairytale farewell for herself and Diamonds teammate Tegan Philip.