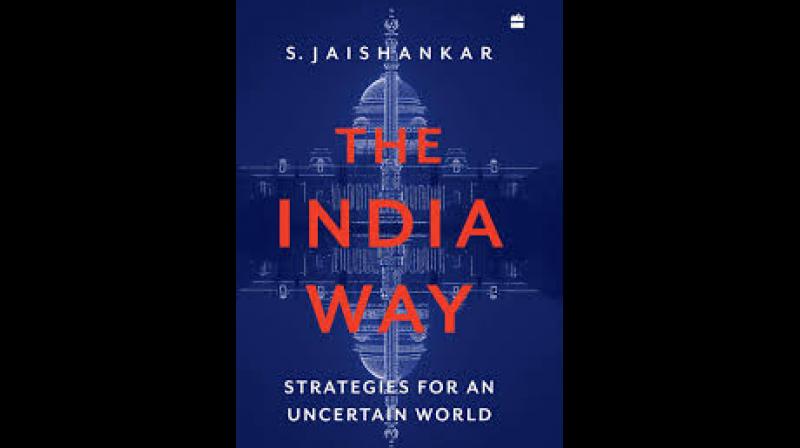 Rarely does an incumbent foreign minister have the time or inclination to write a book on foreign policy. But when a seasoned practitioner of diplomacy with a scholastic mind like Dr S. Jaishankar is in the saddle, a long work drawing upon deep reflection is not out of turn.

The India Way is both an act of self-expression by a keen observer and lover of international relations, and a vehicle to communicate to the world how India is adapting to historic changes. The running theme in the book is that we exist in a drastically altered international landscape, wherein liberal globalisation and multilateral cooperation of the post-Cold War era are out and nationalistic contestation and geopolitical conflict are back.

Unlike in earlier eras, when India paid a heavy price by remaining insular and apathetic to big transitions in the international system, Jaishankar assures readers that it has its eyes on the ball this time. His book can be summed up as a call for India to exploit the growing fissures among the great powers and shed past inhibitions to self-confidently play the realpolitik game.

Since China’s rapid rise and muscular assertions of dominance are the defining features of the present order, Jaishankar devotes considerable space to how India must size up the dragon and manage its challenge. He states upfront that “creating a stable balance in Asia is India’s foremost priority” and makes a passionate plea for Indians to regain their “intuitive feel” for forging and maintaining balances of power by harking back to Chanakya’s maxims and the cold-blooded manoeuvrings in the Mahabharata. ‘Bharat’, as opposed to the modern construct of India, had the gene for power politics and Jaishankar seeks to reincarnate that part of our civilisational heritage in the current “era of greater nationalism” and sharpening international divisions.

Lamenting the history of India as a ‘soft state’ when confronted by violations of its sovereignty and terrorist violence, Jaishankar argues that what the country lacked in earlier periods was “a national elite with a strong and validated sense of its bottom lines” to reply categorically to foreign threats. He contrasts the “lack of response to 26/11” (the 2008 Mumbai terrorist attacks) with the post-Uri surgical strikes of 2016 and the Balakot airstrikes of 2019 to contend that the willpower to perform the “dharma of the state” is now firmer.

One of the motifs of the book is ‘strategic clarity’ and the need for India to be alert to the opportunities presented by schisms in the prevailing contentious international climate. During the Cold War, the flexibility with which China swapped alignment with the Soviet Union to the United States and took risks to advance its geopolitical interests gave it an edge over India, which was rigid and wedded to “consistency”. Jaishankar, who was India’s Ambassador to China from 2009 to 2013, insists India must take a leaf out of its crafty neighbour and master the art of “strategic deception” and cunning which China skillfully deploys to its advantage.

At the operational level, what exactly is the “great pragmatism” Jaishankar advocates as the talisman for India to emerge as a leading power? Since Washington under the Donald Trump administration has diminished alliances and disrupted coalitions, India’s chief diplomat is not sanguine about doing a China-like somersault, when Chairman Mao Zedong met President Richard Nixon in 1972 to corner the Soviet Union.

Instead of allying India formally with the US to counterbalance China, Jaishankar doubles down on the mantra of ‘multi-alignment’ and “loose working arrangements with convergent powers”, including the US but apparently not over-reliant on it. For Europe and North America, which share India’s democratic values, he posits India as a “safe partner” to reduce their dependence on authoritarian China as the go-to outsourcing destination.

What Jaishankar does not dwell upon is whether soft and loose coalitions on military and economic fronts will be sufficient to force China to back off from its expansionist path or at least mellow it down. Robust debate is required on the present Indian strategy to push the dragon back into its permissible confines. Is it optimal, or are more radical moves such as reopening the question of India’s recognition of Tibet and Taiwan as parts of China and overtly militarising the ‘Quad’ grouping, necessary?

An entire chapter of the book is devoted to Japan to make the case that without it, the construct of ‘Indo-Pacific’ which expands India’s maritime influence is a non-starter. The Japan-USA-India trilateral (JAI) and Japan-Bangladesh-Myanmar connectivity initiatives are cited in the context of an overall Indian strategy to achieve “a new Asian balance”. One could add to this ‘plurilateral’ mix the recent formation of a France-Australia-India trilateral to stabilise the Indo-Pacific. If China is a consummate player of what Jaishankar terms “the logic of power”, so should India.

The book’s epilogue brings readers up to speed with how the coronavirus pandemic has exacerbated the nationalistic fervour sweeping the world and rendered “geopolitics and geo-economics more heated”. Jaishankar shows how purely commercial calculations, which used to dominate in the heydays of globalisation, have now been overlaid with a heavy dose of politics. India, he believes, can benefit from this more conflicted environment as a “trusted partner”, as opposed to a rapacious China.

The India Way is a clarion call for a sophisticated Indian nationalism that digs into cultural roots and maximises gains from the uncertainties of a multipolar world order. For a career diplomat who only recently joined party politics in India, Jaishankar’s openness to policy changes and questioning of old dogmas is refreshing.

But the book has drawbacks. Although Jaishankar criticises ‘bureaucratism’ as a hurdle hampering a coordinated and cohesive Indian foreign policy, he does not propose administrative reforms such as lateral entry of experts and intellectuals into the Ministry of External Affairs and recruitment of foreign service officers based on specialisation in the discipline of international studies.

Jaishankar wants Indian foreign policy to get brand recognition in the world and is brilliant at articulating the Indian ethos. But the lack of an Indian world news TV channel promoting Indian perspectives globally, and the absence of an organised Indian social media presence to counter negative imagery of India in international public opinion, are glaring gaps which he does not contemplate.

Jaishankar is also coy about judging the key personalities, including top world leaders, with whom he is intimate. Not even Prime Minister Narendra Modi, whom Jaishankar served first as Foreign Secretary and then as External Affairs Minister, gets much mention as an individual despite his personal imprint on transforming Indian foreign policy. Jaishankar's limitations of holding a high political office show in the absence of candour in the book.

Lastly, Jaishankar’s prose style is heavy and elliptical, compelling even specialists in foreign affairs to read and re-read sentences and paragraphs. He is conceptually dense but light on empirical illustrations and comparisons.

But all said and done, given the official position that Jaishankar occupies and his bold projection of an India that is no longer reluctant to do power politics, this book is educative about what the future holds for an aspirational country.

Telling the India story, one dream at a time