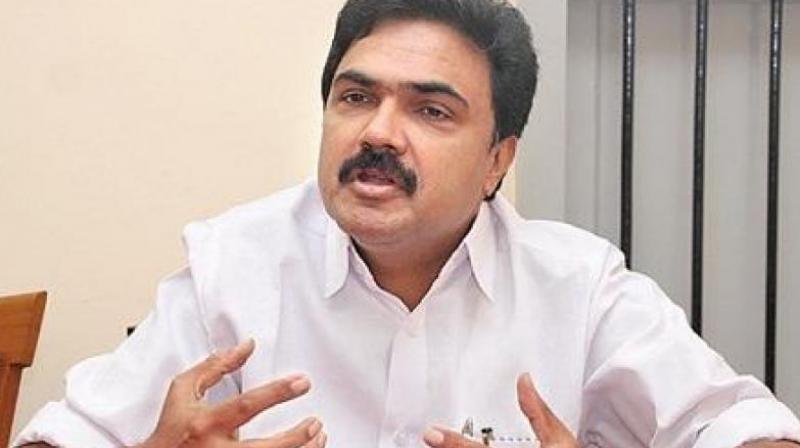 Thiruvananthapuram: In a significant political development that could have an impact on the electoral calculations in Christian dominated central Kerala, the Jose K Mani faction of Kerala Congress on Wednesday decided to join the ruling CPM led Left Democratic Front.

The decision was taken at the parliamentary party meeting held at the residence of Jose K Mani in Pala in Kottayam district. “Yes, We have decided to cooperate with the LDF,”  a beaming Jose told mediapersons.

Prior to being ousted from ruling UDF in June this year, the Kerala Congress (M) remained with the alliance for nearly four decades. However, a series of problems cropped up in the party after K M Mani's death in April 2019.

Jose K Mani who is currently member of Rajya Sabha, said he will quit the Upper House. The seat was won with the support of the opposition Congress led UDF.

He accused the Congress of handing out a step motherly treatment to his party. “They never came out with any formula to take us back. Instead of accommodating us, the Congress tried to use the rival faction led by P J Joseph to decimate us and weaken our organizational strength,” he alleged.

When asked whether it was appropriate for him to join hands with LDF which had conducted massive agitation against his father leveling serious charges of corruption and even trying to physically prevent him from presenting the budget in Assembly, Jose K Mani said the bar bribe allegations were triggered by the UDF. “The decision to join LDF has been taken without preconditions,” he said while referring to reports that the party would stake claim for Pala constituency which was won by LDF candidate and NCP leader Mani C Kappan in a by-election.

Jose said one of the main reasons for his party’s decision to join LDF was the ruling front’s commitment to defending secularism and principled position against communalism.

The NCP has made it clear that there are no circumstances which warrants the party to spare the Pala seat for Jose K Mani faction. Political observers say while Jose may have decided to join the LDF but their entry is going to trigger fresh problems. The Jose K Mani faction wants to contest at least 13 seats in the next Assembly elections. Many of these seats were contested by the LDF constituents in 2016. Hence reaching a seat sharing formula is going to be a tough task for LDF leadership.

But on the whole, getting a Christian dominated party in central Kerala on its side is definitely a gain for the LDF.

Jose K Mani faction was removed from the UDF recently after it refused to relinquish the post of  Kottayam panchayat president as per the agreement reached in UDF earlier.

Chief minister Mr Pinaaryia Viayan hailed Jose K Mani's decision to be part of the LDF. "The decision proves that the LDF's political stand is correct. All other things will be discussed by the LDF leadership in the appropriate forum," he added.

Former chief minister and veteran Congress leader Oommen Chandy said Jose faction’s decision will pain Mani's soul. “It’s unfortunate that they have decided to join LDF which had hounded the former finance minister. Mr Mani remained with UDF in its highs and lows for nearly 40 years,” he said.

Kerala Congress (Joseph) leader P J Joseph said no one had ousted Jose K Mani faction from UDF. They chose to go out on their own. In Pala Assembly by poll the party said they didn’t require the official symbol “two leaves” and K M Mani’s face was enough to win, they put up a weak candidate. All that led to their defeat in the assembly by poll in a seat which was held by K M Mani for nearly five decades." he added.

The town halls weren’t a debate — but Trump still won