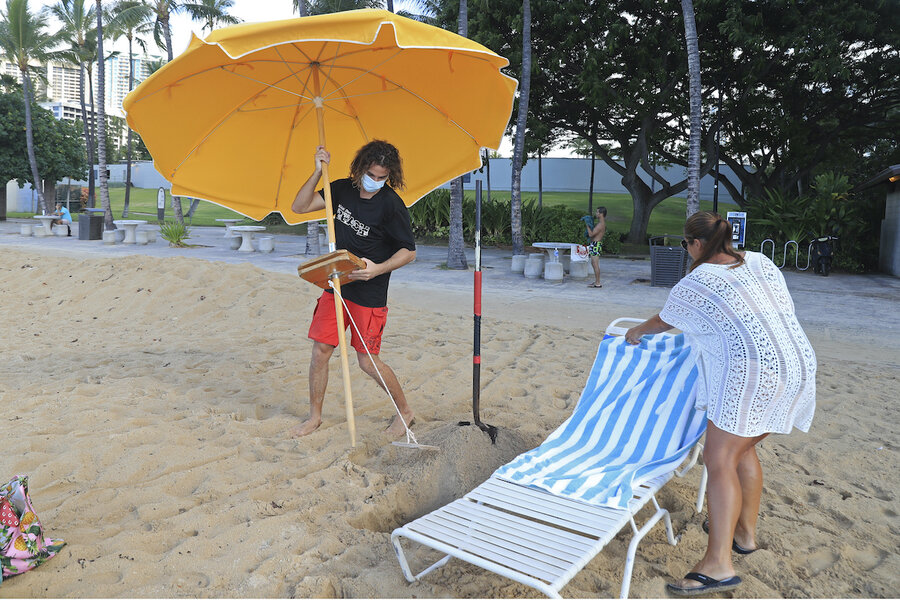 About 8,000 people landed in Hawaii on the first day of a pre-travel testing program that allowed travelers to come to the islands without quarantining for two weeks if they could produce a negative coronavirus test.

Angela Margos was among the first passengers in San Francisco to get on a plane to Hawaii Thursday morning.

“Vacation, peace of mind,” said Ms. Margos, a nurse from San Carlos, California, of why she’s flying to Hawaii. “I need time to relax, unwind.”

The new testing program is an effort to stem the devastating downturn the pandemic has had on Hawaii’s tourism-based economy. Officials had touted the mandatory quarantine rule as an integral part of Hawaii’s early success in keeping the coronavirus at bay.

But gaps in the pre-travel testing program coupled with increasing cases of COVID-19 across the United States have raised questions about whether Hawaii is ready to safely welcome back vacationers.

And when local restrictions were eased before summertime holidays, community spread of the disease spiked to alarming levels, forcing a second round of stay-at-home orders for residents and closures for non-essential businesses.

Ms. Margos ran into hiccups with getting her test. She first did it at the hospital where she works, only to find out it wasn’t an approved site for United Airlines and the state of Hawaii. She then paid $105 for a drive-thru test, but she was later informed there was an error with that test.

Ms. Margos ultimately paid $250 for a fast-result test Thursday at the airport in San Francisco, which came back negative.

Opponents of the testing program have said a single test 72 hours before arrival – especially when coupled with the option to fly without a test and still quarantine – is not enough to keep island residents safe.

Kathleen Miyashita and her husband were among those who came to Hawaii Thursday without getting tested. They said they plan to quarantine at their family’s farm on Oahu.

“We chose to do the 14-day quarantine,” Ms. Miyashita said. “We have no issues with having food being brought in. It’s like a quarantining haven in terms of having fresh fruits and vegetables at home.”

She said she and her husband were “not at all” concerned about being asymptomatic carriers of the disease.

“We’ve been traveling, and we just take precautions,” she said, adding that they had already done one quarantine in Hawaii about two months ago.

Hawaii’s economy is almost entirely built around tourism, and local families who rely on the sector to survive need to return to work.
More than 100 of Hawaii’s approximately 4,000 restaurants, bakeries, and caterers have closed permanently and more than 50% predict they will not survive the coming months, officials have said.

Monica Toguchi Ryan, whose family has owned and operated The Highway Inn restaurant on Oahu for over 70 years, said the lack of tourism has been crippling.

“The restaurant and service industry has suffered so much during this pandemic,” Ms. Toguchi Ryan said. “Restaurants have not received any federal relief since the spring and are struggling to pay their expenses. Some restaurants have closed entirely, unable to pay for their rent, food supplies, and staff wages.”

Ms. Toguchi Ryan joined Democratic Gov. David Ige on Wednesday to talk about a new restaurant debit card that will give some unemployed Hawaii residents $500 to spend at local restaurants over the next 60 days. The $75 million program is being funded by federal CARES Act money and is aimed at stimulating the local economy.

“When restaurants like us have more customers, we buy more from our suppliers and we reinvest the money several times over in our local economy,” Ms. Toguchi Ryan said.

Hawaii, which has about 1.4 million residents, reported 10 additional coronavirus deaths and more than 100 newly confirmed cases on Wednesday. On Oahu, home to the famed Waikiki Beach and the state’s most populated island, the positivity rate was nearly 4%.

County mayors have criticized the state’s plan for a single test prior to flying and want a mandatory second test for all arriving passengers.

Kauai island Mayor Derek Kawakami said last week that his initial proposal for secondary testing was rejected by the governor.

Big Island Mayor Harry Kim said his county would opt out of the pre-travel testing program entirely and continue to require all arriving visitors to quarantine for two weeks. Both now have different plans.

The governor said this week that mayors could implement certain secondary testing measures on their respective islands, but the cost and logistics of running such programs would be left to the counties.

Maui and Kauai counties decided on voluntary secondary testing for visitors. The Big Island will require secondary rapid screening upon arrival for visitors to avoid quarantine. Oahu officials have said they want to put in place another layer of screening but do not yet have the testing capacity.

The mixed bag of county and state rules could create chaos for vacationers who have not properly prepared for the various screening requirements, especially those traveling to the Big Island.

“This second test upon arrival to Hawaii island will provide an extra layer of protection for our community,” Mr. Kim said in a statement Monday. “Virtually, all medical and coronavirus experts agree for the necessity of more than one test.”

Those arriving on the Big Island – home to Hawaii’s active volcanoes and the site of a 2018 eruption that wiped out entire neighborhoods – will take a mandatory rapid antigen test when they land.

Results will be available in about 15 minutes, and travelers who test negative will not be required to quarantine. People who test positive will be required to immediately get a more accurate PCR test and then quarantine until their results are available, usually within 36 hours.

People who test positive in the state, whether on vacation or at home, are required to isolate and cannot fly until they no longer have the virus.

Trump gets a judicial reality check