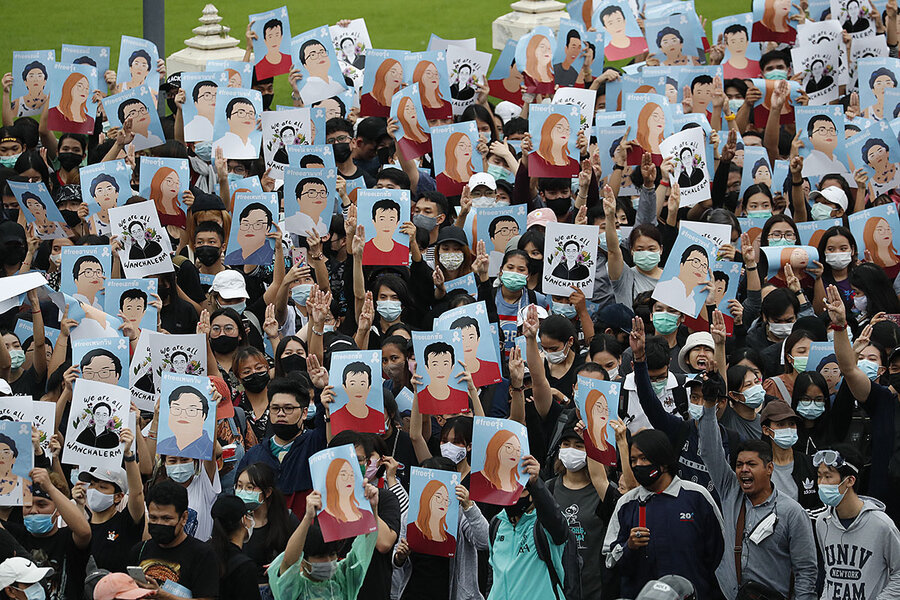 Like high school students all over the world, Petch has seen his studies upended this year by the global pandemic. But it’s also been a year of turmoil for another reason: Thai students are on the march, demanding political and social change.

Last week, Petch, age 16, stood in a rain-lashed crowd at Rajprasong, a downtown transit intersection, wearing his school uniform and soaking up the atmosphere of defiance in the air. He’s part of the largest protests to sweep Bangkok since a military coup in 2014, the second in his lifetime: a movement that is challenging the powers of Thailand’s military-backed government and, increasingly, of its constitutional monarchy, long considered off-limits for criticism.

“I’m not afraid of the government’s power. They can arrest hundreds or thousands of people, but we will keep fighting because every one of us is the leader,” says Petch, who asked to be identified by his nickname.

Unlike a decade ago, when Thai troops put down prolonged protests by mostly middle-aged “red shirt” workers and farmers, the face of opposition this time is high school and college students, as well as young workers. And their defiance of the authorities is built on a broader set of concerns about Thai society, one that goes beyond the elite power struggles of previous rounds of street protests. Analysts say their willingness to question the wealth and power of one of Asia’s last surviving royal families heralds a new and potentially tumultuous trajectory.

“You have a generation of Thais who are impatient and have begun to be aware that the role of the monarchy and the military in their society is very different from the role that those institutions play in other societies,” says Michael Montesano, an expert on Thailand at the Institute of Southeast Asian Studies in Singapore. “They’re more and more the driving force in Thai politics.”

In recent days, political turmoil has escalated since authorities arrested dozens of protesters, including prominent leaders, and issued an emergency declaration that banned gatherings of five or more people in Bangkok. Over the weekend, thousands continued to defy the ban, and there were tense standoffs with police who used water cannons laced with blue dye and chemicals to disperse crowds. Smaller protests erupted nationwide.

In one incident, protesters on the route of a royal motorcade flashed a three-finger salute from “The Hunger Games” trilogy that is popular at demonstrations. Two protesters were charged with an obscure criminal offense for their defiance of the monarchy – for which they could face life imprisonment.

Protest leaders have called for the dissolution of the government and a new constitution to replace a military-drafted one that they say is undemocratic. Kanniti Limcharoen, a student leader, says he’s confident that the movement can prevail. “I don’t think it will be a long fight. The legitimacy of the government has become less and less,” he says.

Last year Thais voted in the first election held since the 2014 coup. The military-controlled Senate and a coalition of parties in the legislature then installed Prayuth Chan-Ocha, the army general who led the coup, as prime minister, defying calls for an end to the military’s involvement in politics.

Among those opposing the military was the Future Forward Party, led by a charismatic young leader, Thanathorn Juangroongruangkit. In February this year, Thailand’s Constitutional Court dissolved Future Forward Party for receiving a loan from Mr. Thanathorn, the scion of a wealthy business family. His party had received more than 6 million votes in the election, the third largest share of the vote.

Supporters accused the court of doing the bidding of the military, but plans to hold rallies were put on hold by the COVID-19 pandemic. In March, the Thai government imposed a national state of emergency, which included a nighttime curfew.

While Thailand has largely managed to contain the coronavirus, its economy has been flattened by the shocks to global trade and tourism. This has exacerbated the frustrations of young Thais who see the pro-military coalition as incapable of leading the country out of crisis.

“It’s unfortunate for the country when the old generations are not very supportive, when those in power see this movement as a threat to the country, rather than to make Thailand better, more democratic, to ensure better redistribution of public resources,” says Titipol Phakdeewanich, the dean of political science at Ubon Ratchathani University.

By July, a group called Free Youth had begun organizing rallies in defiance of the emergency rule. (The group later renamed itself Free People, after merging with other pro-democracy groups.) Since then, the protests have swelled to tens of thousands of people, and their demands have grown bolder.

In August, at a rally held at Thammasat University, activist Panusaya Sithijirawattanakul read out an unusually frank movement manifesto. Among its 10 demands was the abolition of Thailand’s strict lèse-majesté law that criminalizes speech deemed critical of the royal family. The law has long been used to silence critics of the monarchy. The current ruler, King Maha Vajiralongkorn, took power after the death of his long-serving father, King Bhumibol Adulyadej, in 2016. He lives mostly in Germany and commands little of the respect accorded to his father.

Some protesters are wary of attacking the monarchy directly, arguing that it’s more practical to rewrite the constitution first and that political reform needs broad support, including from older Thais who are more reverent toward the crown. Others see this moment as a turning point in Thai history and have used symbols of royalty to represent their dissent.

The dates of protests are also symbolic: For example, Oct. 14, the start of last week’s demonstrations, was the date of a 1976 massacre of students by Thai troops and police.

“I am not scared”

Petch grew up in rural Thailand with his grandmother. She’s a red shirt, a supporter of former Prime Minister Thaksin Shinawatra, who was removed in a 2006 coup and later convicted of abusing his power. His political base in rural Thailand made him a formidable foe of Bangkok’s royalist elite whom he challenged for power, fomenting mass protests from exile. Rival yellow shirt protesters, many of them royalists, also took to the streets during this period.

Petch says he absorbed politics by listening to his grandmother’s stories, then after the 2014 coup became more engaged. Moving to Bangkok for high school, Petch saw firsthand the social inequality that his grandmother, who farms rice, had spoken of. “Students in Bangkok get better education and a better chance than kids in the rural area,” he says. “What chance do kids in rural areas have if there’s no [fair] distribution of [government] budget?”

Joining this year’s anti-government protests put Petch in touch with student activists and has opened his eyes to social prejudices, as well as economic inequities. He identifies as gay, and says he’s been ridiculed by teachers and fellow students. He’s spoken out at rallies against military-style discipline at schools, a shared frustration among protesters who see a through line from social conservatism to politics.

Speaking in public is empowering, he says. “When there’s no prominent leader, everybody becomes the protest leader, and they can come up to the microphone and speak about what they believe in. It’s been so amazing,” he says.

Last week, as he joined the protest at Rajprasong, the transit intersection, Petch knew that he was running the same risk as the red shirts like his grandmother, who camped there for months in 2010. The sit-in was bloodily broken up by troops, and this is sacred ground for him, though his grandmother left before the violence.

“I am not scared of violence if authorities will disperse us. I am young, but if I die, it’s alright. I want to fight for democracy and the causes that I believe in,” he says.