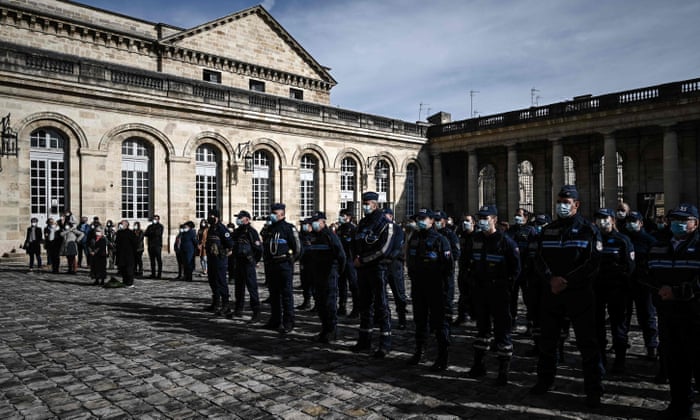 French police have raided dozens of Islamist groups and suspected extremists amid growing pressure on the government to clamp down on religious fundamentalism three days after a teacher was beheaded outside his school.

The interior minister, Gérald Darmanin, said on Monday that the swoops on Islamists – including individuals who expressed support for the attack – should send the message that “enemies of the republic cannot expect a minute’s respite” and more police operations would follow.

Darmanin said about 80 investigations were under way into radical preachers and suspected extremists accused of spreading online hate, and authorities were urgently assessing about 50 associations in the Muslim community, “some of which will certainly be dissolved”.

Police sources told French media that authorities were preparing to deport 213 foreigners who were on a government watchlist and suspected of holding extreme religious beliefs, including about 150 serving jail sentences.

Darmanin said a fatwa appeared to have been issued against Samuel Paty, a 47-year-old teacher of history and geography who was decapitated on Friday outside his secondary school in Conflans-Sainte-Honorine, about 20 miles north-west of Paris.

As part of a class discussion on freedom of expression this month, Paty had shown pupils a series of cartoons and caricatures including two of the prophet Muhammad published by Charlie Hebdo, the satirical magazine that was the target of a 2015 attack in which Islamist gunmen killed 12 people.

Police shot dead Paty’s attacker, an 18-year-old of Chechen origin named as Abdullakh Anzorov. A photo of the teacher’s decapitated head was posted to Twitter from Anzorov’s mobile phone, along with the message: “I have executed one of the dogs from hell who dared to put Muhammad down.” 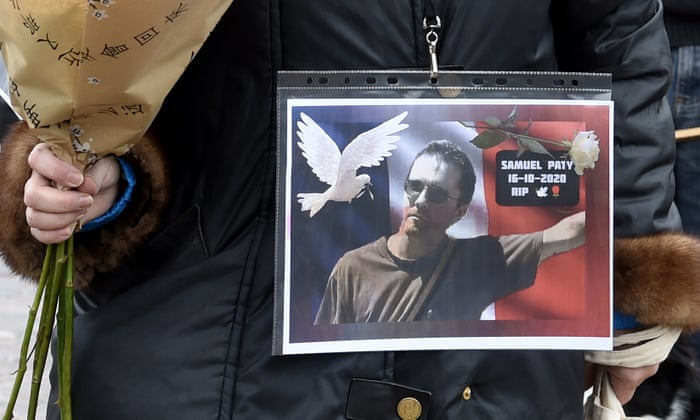 Among the organisations being investigated by authorities is the high-profile Anti-Islamophobia Collective, which Darmanin said appeared to be “clearly implicated” in the attack because the father of a child at the school had repeated its name in a video posted online calling for Paty’s dismissal.

The pupil’s father and Abdelhakim Sefrioui, a well-known Islamist radical with links to the organisation who routinely uses social media and local campaigns to pressure the government over alleged Islamophobia, are among 11 people who have so far been arrested in connection with the murder.

The French president, Emmanuel Macron, has announced a national tribute for the dead teacher to be held on Wednesday, and on Monday he received the teacher’s family at the Élysée Palace, expressing his condolences and assuring them of his support.

At an emergency cabinet meeting on Sunday, Macron announced a series of anti-Islamist measures including concerted steps against “the structures, associations and people close to radical groups … who spread hate and can encourage attacks”. Macron reportedly told ministers: “Fear is about to change sides. Islamists must not be allowed sleep soundly in our country.”

France’s chief public prosecutors were summoned on Monday to an urgent meeting with the justice minister, Éric Dupond-Moretti, to discuss “additional measures necessitated by the situation”, while security at France’s schools is to be increased when classes return after the half-term break.

Marlène Schiappa, a junior interior minister, summoned social media bosses for an urgent discussion of the role social networks played in the attack in Conflans and in previous atrocities. Gabriel Attal, a government spokesman, said: “Those who participated in the public lynching of this teacher on social media are in some way also responsible for what happened.”

A day after tens of thousands of people took part in dozens of rallies in towns and cities across to France to support free speech and honour Paty, Macron is under pressure to come up with an effective response to the latest in a series of Islamist terror attacks that have rocked France since the Charlie Hebdo massacre.

More than 240 people have died from Islamist violence since that attack, prompting opposition politicians – particularly on the right – to accuse the government of waging a battle of words rather than taking decisive action.

Bruno Retailleau, the parliamentary leader of the centre-right Les Républicains party, said Macron was “fighting a battle of vocabulary, even while a part of the country is defying the fundamental values of the French republic”.

The leader of the far-right National Rally, Marine Le Pen, laid a wreath outside Paty’s school on Monday. She called for “wartime legislation” to combat the terror threat and demanded an “immediate” moratorium on immigration and the expulsion of all foreigners on terror watchlists.