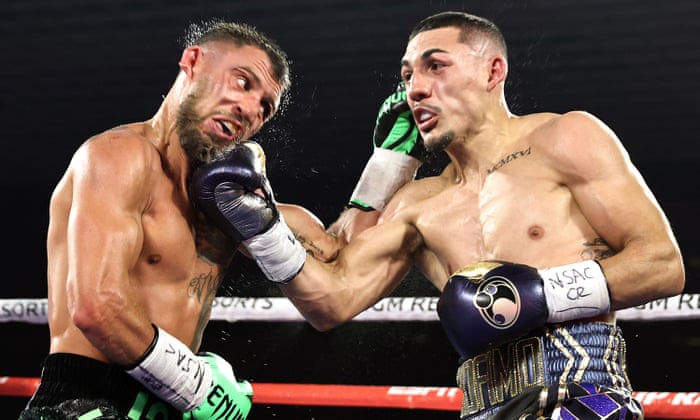 A star was born in the bubble on Saturday night as Teófimo López delivered on his enormous promise with a surprisingly comprehensive victory over Vasiliy Lomachenko, the two-time Olympic gold medalist and three-weight champion from Ukraine widely regarded as boxing’s pound-for-pound best.

The 23-year-old Brooklyn native dominated the first half of the hotly anticipated lightweight title unification fight at the MGM Grand Conference Center, then held off a late-round surge and showed the finishing kick of a champion to unify the IBF, WBA and WBO title belts at 135lbs. The three judges at ringside favored López by scores of 119-109, 117-111 and 116-112. (The Guardian had it 116-112.)

López, who captured the IBF’s version of the lightweight championship with a concussive knockout of Richard Commey in December and went off as a 3-1 underdog on Saturday, sprung the upset not with his formidable power but by outboxing the sport’s most technically proficient fighter – an outcome foreseen by virtually no one.

“A lot of people were talking highly about him and I expected more,” López said. “Basic. It was pretty basic, honestly. Maybe it was the 14-month layoff that did it, I don’t know. But I had 10 months laid off, so why does it matter? I fought the guy that everybody says is the pound-for-pound (best).”

López took advantage of a slow start by Lomachenko, a former world champion at featherweight and junior lightweight whose only flickers of vulnerability have come since moving up to lightweight. The 32-year-old southpaw spent the first four rounds throwing punches very sparingly, content to sit back and measure the task before him. López was able to bank rounds easily by touching his opponent with a steady diet of jabs and straight rights to the head and body.

As the fight went into the middle rounds, Lomachenko continued to wait on a mistake that never came and was forced to alter his tactics as his face began to swell from the accumulation of López’s blows. After a warning from referee Russell Mora for leading with his head, Lomachenko burst to life midway through the eighth and landed a three-punch combination followed by a crisp right hand. He landed 19 of 38 punches in the round after connecting on a scant 31 in the first seven combined. The fight was on.

Sensing López could not contend with the pressure, Lomachenko picked up in the ninth where he’d left off and continued to let his hands go. He wobbled López with a combination early in the round but the younger champion held his ground and hit back with an uppercut through Lomachenko’s guard. By the 11th, Lomachenko was pouring on the punishment and the momentum had swung decidedly in his favor, though (and as the scorecards would bear out) it was clear he’d waited too long to flip the switch. 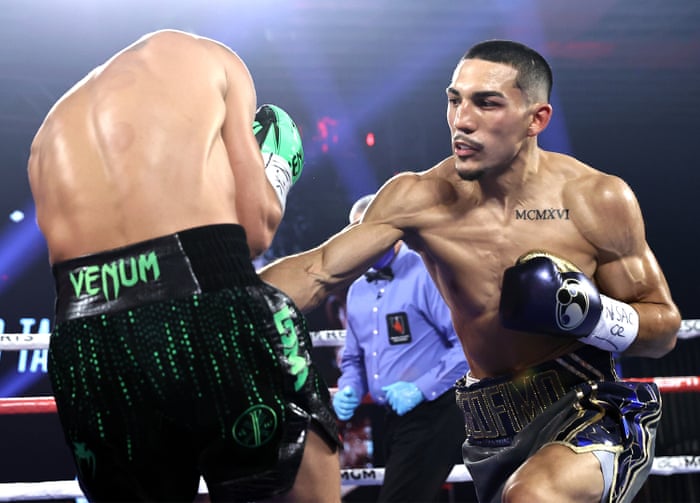 Knowing Lomachenko likely needed a knockout to win entering the 12th, López’s father and trainer urged his son to box from range. But López ignored the advice and bit down in the final round in a clear effort to close the show in style. He battered and bloodied Lomachenko with straight rights and uppercuts throughout the final three minutes, imposing his size and physicality on the pound-for-pound king. The referee appeared to spare Lomachenko by calling time on the action after an accidental head butt in the final seconds caused a large gash over López’s right eye, but by then the outcome was all but a handshake away.

“I’m a fighter,” López said when asked why he ignored his father’s counsel. “I got to dig in deep. I knew he was coming. I didn’t know if they had him up on the scorecards or not, and I love to fight. I can bang, too. I don’t care, man. I’ll take one to give one. That’s what a true champion does. I find a way to win.”

Lomachenko connected on 141 of 321 punches compared to 183 of 659 for López, according to Compubox’s punch statistics.

“I think in the first half of the fight, he got more rounds than I did,” Lomachenko said through a translator. “But then in the second half of the fight, I took it over and I was much better. I want to go home and to review the fight to see. I can’t comment right now much about it. But I definitely am not agreeing with the scorecards.”

He added: “At the moment I think (I won the fight). But the result is the result. I’m not going to argue right now.”

Afterward López claimed it as a victory for the younger generation of fighters who are eager to break through, putting himself at the head of an up-and-coming class that includes Shakur Stevenson, Jaron ‘Boots’ Ennis and David Benavidez.

“This is the new generation,” he said. “We’re bringing back what the old school was. Fight the best and you push on it. I’m not here to pick and choose who I want to fight because I want to defend my title and keep that ‘O’. No. And now, who knows how my figures are going to go up after this.