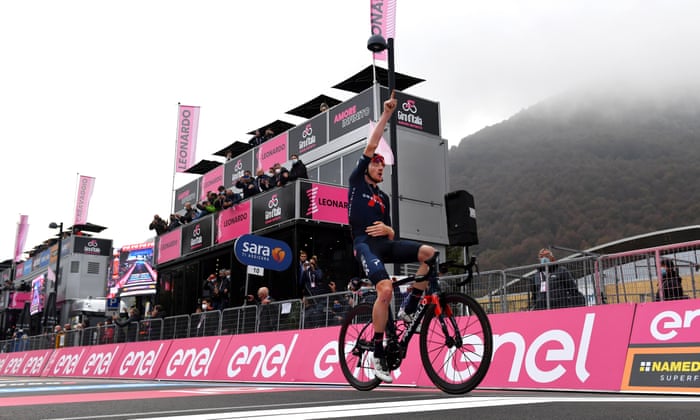 Tao Geoghegan Hart became the latest British winner on a Grand Tour after sprinting to victory on stage 15 of the Giro d’Italia at Piancavallo. The 25-year-old Londoner saw off the Team Sunweb pair of Wilco Kelderman and Jai Hindley for a win which also thrusts him into contention in the general classification.

Victory made Geoghegan Hart the fifth stage winner for the Ineos Grenadiers, despite the team losing leader Geraint Thomas after a crash in stage three.

Geoghegan Hart told Eurosport: “The plan was to support Geraint and I really believe that Geraint would have been on the podium of this Giro, or better. Crossing the line first is something truly incredible. I’m honoured to be a part of this team.

“This season we have had some big highs but also some big lows. We just have to show the Grenadier spirit that we’re just trying to foster in this team, and keep bouncing back the way we can.”

Aiming to spring Kelderman to the top of the classification, Team Sunweb had stretched the final climb with Almeida struggling to hold on and two-time winner Vincenzo Nibali also losing time. And Almeida’s struggle does not bode well for the final week of the race following Monday’s rest day, with a number of steep mountain stages still to come.

In the Tour of Flanders on Sunday Dutchman Mathieu van der Poel beat his powerful Belgian rival Wout van Aert in a photo-finish sprint to win the classic, as world champion Julian Alaphilippe crashed out of the race. 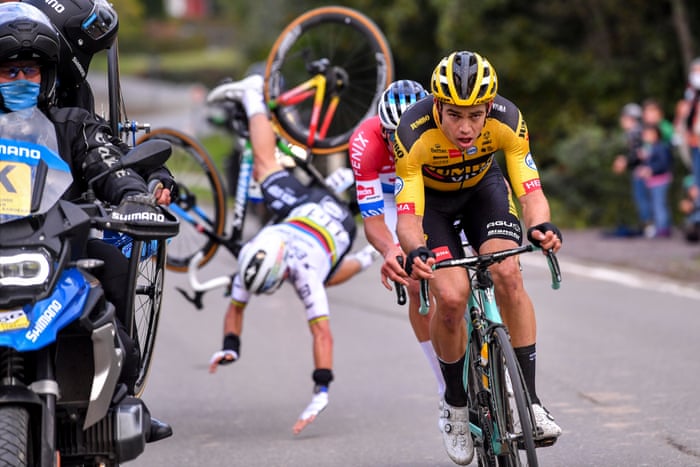 “They had already called my name twice, but I couldn’t believe it. I’ve asked for confirmation 10 times. I have no words for this. I am speechless,” said Van der Poel, grandson of the late Frenchman Raymond Poulidor, who won another Monument – Milan-San Remo – in 1961.

Alaphilippe, who had split the peloton with an attack on the Kopperberg, went head over heels after his right elbow clipped the back of a race motorbike 35km from the line after the trio had broken clear.

"The world champion is on the deck!"

Julian Alaphilippe collides with a motorcycle, flips over and his race is over! 💥

The 26-year-old Van der Poel, riding just in front of the Frenchman, narrowly avoided the bike on the right side of the road. Alaphilippe eventually sat up, holding his right arm and screaming in pain before being attended to by race doctors before being taken to a hospital where x-rays showed two fractures in his hand.

“A few motorbikes wanted to go behind us, because our gap was growing, I wanted to take profit as much as possible to go behind the moto, and I think Julian was not concentrating or something. It’s a real pity that he hit the moto,” said Van Aert, who had been looking to become the first rider to win the Tour of Flanders and Milan-San Remo in the same year since Eddy Merckx in 1975.