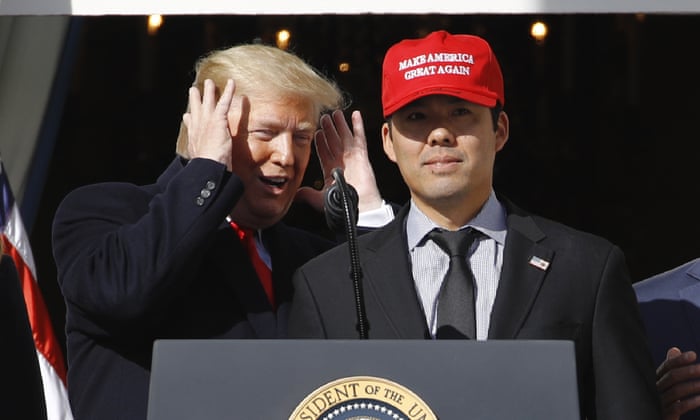 With the World Series starting on Tuesday night in the midst of the Covid-19 pandemic, Donald Trump felt it was a perfect time to indulge in one of his favourite hobbies: trashing Dr Anthony Fauci’s baseball abilities.

“Look, he’s a nice guy,” said the president during an appearance on Fox and Friends, of his top public health expert. “He has got a really bad arm and not a good baseball thrower, but he’s a nice guy.”

The striking thing about Trump’s comment is that, for once, he’s right. America’s top infectious disease expert has a horrible arm, as evidenced when he threw out the first pitch of the baseball season in July. The throw was consistent: it was both weak and off target. But then again Fauci is 79 years old and has other skills, such as leading the National Institute of Allergy and Infectious Diseases under six presidents since 1984, so he’s forgiven. (50 Cent, on the other hand, has no such excuses).

Trump is only five years younger than Fauci – and recovering from a deadly disease – so his arm may not be not too hot either. Not that we’ll know either way any time soon: every president since 1910 has thrown out a ceremonial first-pitch at a baseball game during their time in office, but Trump has not. Major League Baseball’s commissioner, Rob Manfred, said the president told him he did not want to participate in the ceremony at last year’s World Series “in order to make the fan experience as positive as possible”.

During last year’s World Series, the president attended one of the Washington Nationals’ home games. He was greeted by chants of “lock him up”.

‘Lock him up’: Trump greeted with boos at World Series – video

Trump, naturally, claims he was a superb player. In 2010, he told MTV: “I was supposed to be a professional baseball player.” By 2015, his athletic ability had grown, the soon-to-be-president saying he could have turned professional but “in those days you couldn’t even make any money being a great baseball player”. Over at Slate, in an entertaining, meticulously researched deep dive into Trump’s baseball career, Leander Schaerlaeckens examined the president’s record in high school. His conclusion: “It seems like Trump was a solid defensive first baseman but a bad hitter.”

Keith Law, a senior baseball writer who was once a member of staff at the Toronto Blue Jays, is more withering. Looking at Trump’s .138 batting average in high school (for non-baseball fans, anything below .250 is underwhelming), Law told Schaerlaeckens: “You don’t hit .138 for some podunk, cold-weather high school playing the worst competition you could possibly imagine. You wouldn’t even get recruited for Division I baseball programs, let alone by pro teams. That’s totally unthinkable. It’s absolutely laughable. He hit .138 – he couldn’t fucking hit, that’s pretty clear.”

Trump is unlikely to attend this World Series while he campaigns for the 3 November election. If he does, any boos will be on the quiet side: the games will be played in front of crowds limited by the Covid-19 pandemic he has failed to contain.