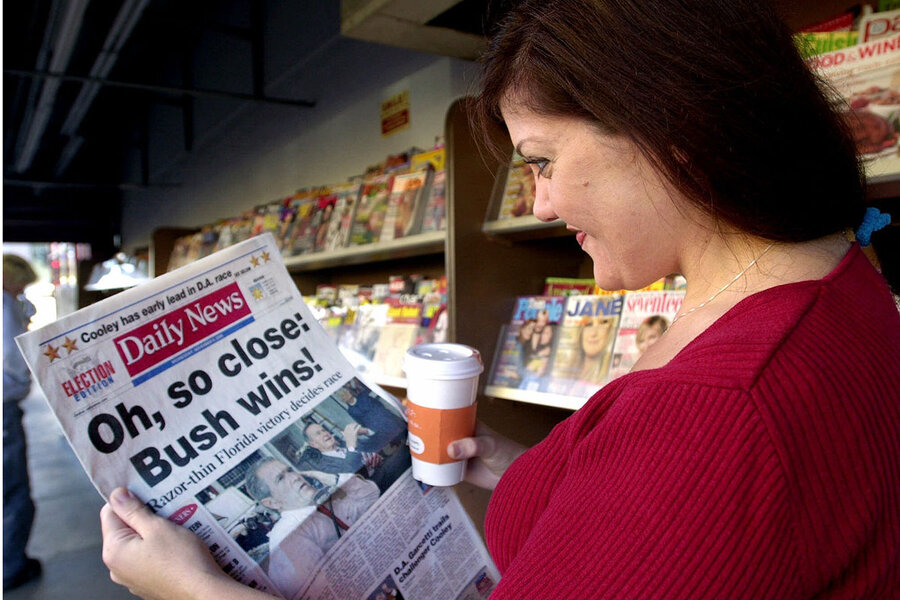 “Most election litigation contests an election after the election is done,” says Barry Richard, a Tallahassee, Florida, attorney and Mr. Bush’s general counsel in the state in 2000.

Many of these lawsuits are dropped because the number of contested ballots are too few to swing the outcome. “This time it’s different because we’ve got a huge amount of litigation challenging things before the election happens,” he says.

What’s also different, he adds, are repeated attacks on the legitimacy of the election.

“In the past, nobody questioned the integrity of the system. Nobody suggested that the vote was fraudulent or that the election wasn’t fair. It was just a question of how you fix the problem,” says Mr. Richard, who has represented Democratic and Republican candidates in litigation.

Expansion vs. contraction of the electorate

Republicans contend that the rapid expansion of mail-in voting in November’s election opens the door to ballots improperly cast.

“Democrats are working to shred election integrity measures one state at a time, and there’s no question they’ll continue their shenanigans,” Matthew Morgan, the Trump campaign’s general counsel, said in an email. Specifically, suggests the Republican National Committee’s Protect the Vote website, the Democrats are using the pandemic and courts to eliminate election safeguards by legalizing ballot harvesting and implementing a nationwide mail-in ballot system.

Democrats argue that the greater risk is voter disenfranchisement and that postal ballots can be secure, as demonstrated in several states that already hold universal mail-in elections. They accuse Republicans of seeking to suppress turnout by limiting the number of ballot drop boxes, for example.

This battle has been supercharged by the pandemic and by problems experienced in states that switched to mail-in ballots during primaries and struggled with timely counts. These may portend what lies ahead in battleground states, say legal scholars.

With so many transactions among so many people and in such a charged political atmosphere, “some irregularities are bound to develop,” says Michael Morley, an assistant professor of law at Florida State University in Tallahassee.

In California, where ballots are being mailed to all voters ahead of the election, over 2,000 registered Los Angeles County voters recently received mail-in ballots that didn’t have a section to vote for a president. Officials apologized and said new ballots would be sent.

Spotlighting minor errors “is different from taking small-bore problems and saying it’s chaos and can’t be successful,” says Richard Hasen, a professor of law and political science at the University of California, Irvine.

Disputes over postal ballots involve questions such as: Do you need a witness? How are signatures verified? Does the ballot need to arrive on Election Day and what if the post is late? Can a deadline be extended once early voting has begun?

Courts have already weighed in on some of these disputes after an initial flurry of lawsuits during the primaries. The Supreme Court ruled on one case in South Carolina on Oct. 5, siding with Republicans over signature validation rules. Another pending case involves Pennsylvania, where the Republican-controlled legislature wants to overturn a three-day extension for ballots mailed by Election Day that Pennsylvania’s Supreme Court upheld. The court is also reviewing a similar extension in Wisconsin, another battleground state.

These cases could set important precedents, even if the vote in those states isn’t close, says Professor Hasen. “If it [the Supreme Court] rules the state legislatures have more powers than courts to set the rules, then that has important implications.”

Not all the disputes involve mail-in voting. Battles are being waged over the rules for in-person voting in precincts that often have long lines because of what Democrats say are deliberate suppression efforts.

Still, most of the scenarios for postelection legal showdowns relate to disputes over the validation of postal ballots. Polls suggest as many as one-third of all voters will mail their ballots. Studies show that a higher proportion of them are likely to be disqualified.

The success of postal voting in states like Oregon and Colorado, which both Republicans and Democrats have hailed for their efficiency, may be an imperfect guide to what could happen elsewhere, warns Professor Morley. “It might look smooth today, but that’s only because it took numerous election cycles to get to that point.”

“Mistakes will happen,” says Franita Tolson, a law professor at the University of Southern California, in Los Angeles. “That’s the importance of giving time to count the vote and to get an accurate count.”

In the Florida race in 2000, the Supreme Court had to adjudicate between state officials who wanted to certify the initial results and the state’s highest court, which ordered a halt to the recount of disputed ballots. The Supreme Court ruled that the recount process was flawed and no recount could be held in time for the deadline for deciding Electoral College seats.

President Trump said in the Sept. 29 presidential debate that the Supreme Court could decide this year’s election: “I’m counting on them to look at the ballots, definitely.”

That is not a position Chief Justice John Roberts would relish, given the rancor over Bush v. Gore, says Professor Tolson. “He’s very concerned with the legitimacy of the court, and I do think on some level he has internalized the lessons of the 2000 election,” she says.

Mr. Richard, who litigated for Mr. Bush in Florida in 2000, concurs: “I think the Court will not take a case to decide this election unless they absolutely have no choice.”

Some of the top lawyers in Mr. Biden’s camp cut their teeth on the Florida recount battle, including Marc Elias, who is overseeing efforts to protect voter access and ballot counts. Republicans have also hired lawyers from large firms and recruited scores of volunteers and poll watchers to scour for irregularities in swing states.

With just weeks to go, and millions of votes already cast, some legal scholars are looking at polls and wondering if worst-case scenarios – contested ballot counts, postelection unrest – may be averted by an indisputable defeat for Mr. Trump.

“We may squeak by this time,” says Professor Hasan, referring to a clear-cut result. But that’s cold comfort if the same flaws occur next time, in the absence of greater professional and nonpartisan administration of how Americans vote. “Our election system is quite weak.”