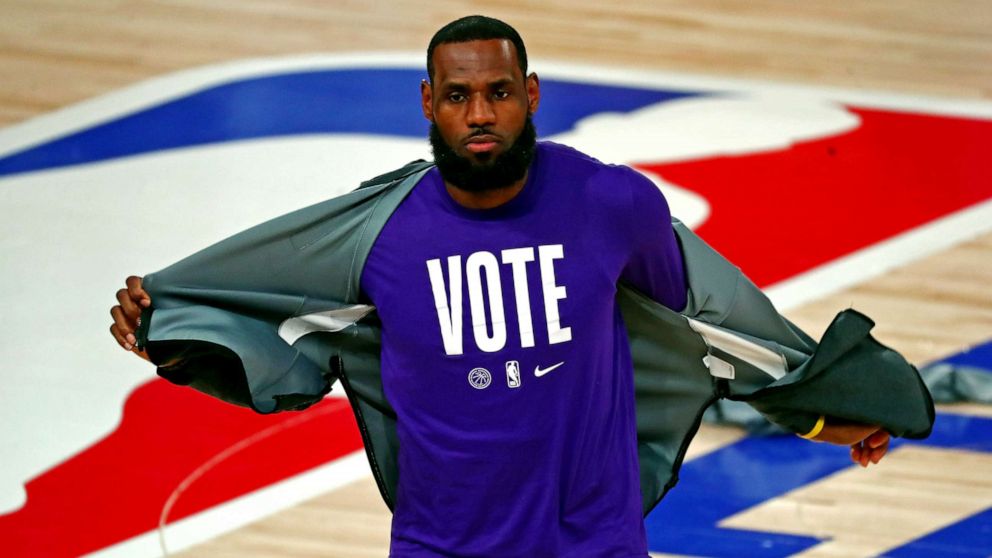 LeBron James and the Los Angeles Lakers made history as they clinched the 2020 NBA Championship in a finals series victory against the Miami Heat. It was the 17th time the Lakers franchise won an NBA title — tied for the most in league history. In the WNBA, the Seattle Storm did the same thing, clinching their fourth championship — also tied for the most in WNBA history.

Returning to action after the coronavirus pandemic shut down play, NBA and WNBA players spoke out against social injustices and advocated for change. They wore names of African Americans killed in police shootings on their gear and jerseys, as well as other phrases such as “Say Her Name” and “Respect Us.” Player protests even led teams to postpone games in the wake of the police shooting of Jacob Blake.

Not limited to just basketball, athletes across professional sports took stands: they kneeled during the playing of the national anthem and spoke out during press conferences. Many even received unprecedented support from league leadership as well.

Players expressed a desire to continue their activism and try to affect institutional change. However, in the weeks and months ahead, as players settle into their offseason and eventually begin new seasons, how might their activism evolve?

Author and ESPN senior writer Howard Bryant spoke with ABC News’ “Perspective” podcast this week. He says the outspokenness of professional athletes marks the beginning of a new era and the end of an old one:

“Depending on what generation you are from, you remember when sports didn’t have all the flags and the flyovers and the cops singing the national anthem and the surprise homecomings and the military tributes and all of those different things. From 9/11 to about 2012, you really did have nothing but patriotism on the field. After Trayvon Martin was killed, you saw the Miami Heat wearing their hoodies. Then, you had Ferguson and then, obviously, Kaepernick takes a knee in 2016. So, you’re starting to see this collision. On the one hand, you see the patriotism being sold to fans by the leagues. Now, you’re seeing the protests being demonstrated by the players on the field.”

Bryant is the author of several books, including his latest, “Full Dissidence: Notes From An Uneven Playing Field,” and recently published an article for ESPN titled, “Police, Protest, Pandemic and the End of the 9/11 Era,” in which he discusses colliding forces in sports today.

“We’ll see if the 9/11 era is over. To me, it’s over, but we’ll see when the fans come back what the sports leagues do. Are they willing to simply embrace the polarization? And are they going to say, yes, it’s possible for us now to sell sports to one part of our paying customers. We’re going to sell them with police and then we’re going to have Law Enforcement Appreciation nights, and we’re going to do that while we have Black Lives Matter painted on the basketball court. Can these two images, which are in direct conflict with each other … both coexist?”

Now, according to Bryant, athletes are transitioning into a new era that raises new questions for leagues and their players:

“The question for me is going to be, how do the leagues respond to this assault that we see right now of people saying, well, the NBA ratings are down because of black activism. What do they do with that?”

The weeks and months ahead, Bryant says, could prove to be a critical test of players’ risk tolerance:

“I think that the players risking some of their salary when they walked out and risking the anger of the public is important because now they’re actually willing to risk something that belongs to them, which is their money. At the same time, they are in a very good position to risk some of this because they make so much money. Tommie Smith was a busboy. He was a security guard. He lost everything.”

Bryant also notes that wherever activism goes in sports will not necessarily be dictated by the athletes:

“America is obsessed with celebrity. It’s obsessed with money. It’s obsessed with visibility … it’s the star culture. But it’s really not what’s happened. It’s been completely ahistorical to suggest the players started this because they didn’t. Why were the players out there after Ferguson? Because the people were already on the street. The WNBA has been out there and has done a better job. They’ve shown more leadership than the men have. All of this movement has followed what people are doing. We constantly follow the athletes, so we think they’re the leaders when they are actually following the public.”

2020 in professional sports, especially in the NBA and WNBA, has very much been defined by athlete activism. Whatever institutional change comes as a result of their activism could dictate how athletes continue using their voices going forward:

Listen to the full interview and the rest of this past week’s highlights here: