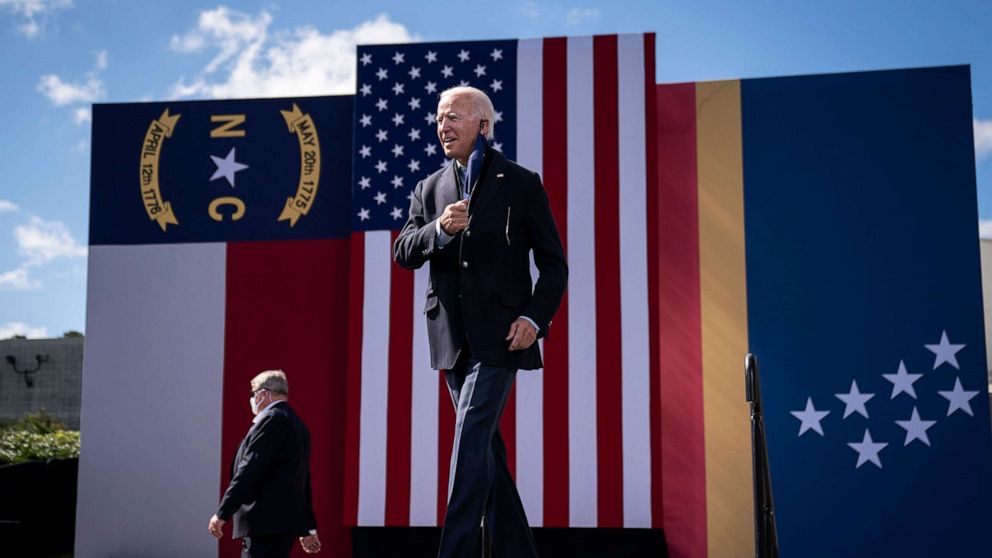 Biden has 49% support among likely voters in a new ABC News/Washington Post poll in the state, with 48% for Trump. The U.S. Senate race, potentially critical for control of the chamber, is similar, with 49% support for Democrat Cal Cunningham, despite revelations of an extramarital relationship, and 47% for incumbent Republican Thom Tillis. 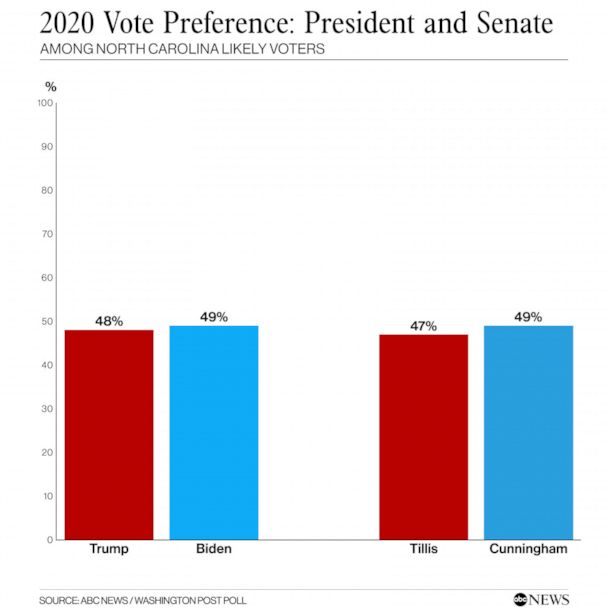 The presidential race differs from the contest nationally — an ABC/Post poll last week found a 12-point Biden lead — in large part given differing demographics. Most notably, evangelical white Protestants account for 31% of likely voters in North Carolina, compared with 15% nationally. White evangelicals in the state support Trump over Biden by 82-17%. 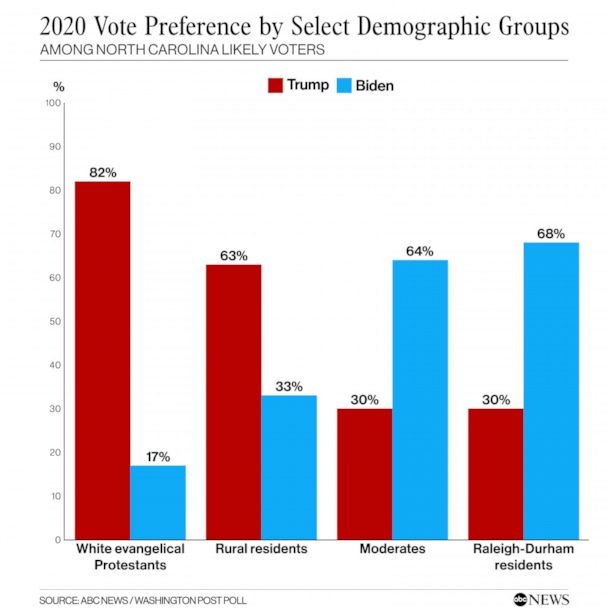 Rural voters also are part of the difference in this survey, produced for ABC by Langer Research Associates; they account for 21% of likely voters nationally but 28% in the state, and back Trump by nearly 2-1, 63-33%. So, too, are very conservative likely voters — 16% nationally but 24% in North Carolina, nearly all for Trump.

Biden pushes back with a 34-point lead among moderate voters, 64-30%, surpassing Hillary Clinton’s 20-point win in this group in 2016; a 68-30% lead in the state’s political, academic and technology hub, the Raleigh-Durham area; and 60-38% among college graduates — the widest Democratic advantage in this group in exit polls since 1988.

Voting and the virus

Early voting is commonplace in North Carolina; 66% of likely voters say they’ll vote early or already have done so, about the same as in 2016. Far fewer, 28%, plan to vote on Election Day (and 6% are undecided when to vote). In a pattern seen nationally and in other states, Biden leads by 60-37% among those who plan to vote early, compared with a wide Trump lead, 72-24%, among Election Day likely voters.

Voting intentions are associated with coronavirus concerns. With the state having reported its highest single-day increase in COVID-19 cases last week, 61% of likely voters are very or somewhat worried that they or an immediate family member may catch the coronavirus. Those who are worried are 22 points more apt than others to plan to vote early or to have already voted.

Likely voters divide 51-45%, Biden-Trump, in trust to handle the pandemic (not a statistically significant difference); similarly, 51% disapprove of how Trump is handling it. More tellingly, among those who are more worried about catching the coronavirus, 68% support Biden. Among those less worried or unworried, 80% favor Trump.

Again reflecting national results, economic attitudes are better for Trump. Fifty-four percent of likely voters approve of how he’s handling the economy and 52% prefer him rather than Biden to manage it. Among those who approve of Trump’s economic performance, 86% back him.

Also better for Trump, as elsewhere, is that 76% of his supporters are very enthusiastic about supporting him, while strong enthusiasm for Biden falls to 61%. That said, Trump’s overall job approval rating is weak, 47-50%, approve-disapprove.

Biden’s 68% support in Raleigh-Durham is somewhat higher than typical for that region — Clinton won 60% there — and looks critical to his chances.

As nationally, there’s a gender gap; it’s a 54-43% Biden-Trump race among women while 53-43% Trump-Biden among men. (These are slight differences given sample sizes.) That includes a 30-point Trump lead among white men, shrinking to a non-significant 10 percentage points among white women. Biden has 84% support from blacks, a fifth of the electorate, and 76% from racial and ethnic minorities overall, who account for nearly three in 10 likely voters.

In the Senate race, Cunningham’s helped by the number of likely voters willing to set aside his marital infidelity: Twenty-seven percent call this extremely or very important in their vote. Many more, 59%, call Tillis’ support for Trump highly important, and more still, 85%, ascribe high importance to which party wins control of the Senate. (Cunningham has confirmed sending romantic text messages to a woman who’s not his wife. That woman has said they had at least one intimate encounter, which Cunningham has neither confirmed nor denied.)

Among those who call Cunningham’s infidelity highly important, 80% back Tillis, while the Republican’s support dives to 33% among likely voters who call this less important or unimportant. There are far closer divisions among those who focused on Tillis’ support for Trump (52-46%, Tillis-Cunningham) and on control of the Senate (48-48%).

Scandal aside, the race is highly reflective of the presidential contest in the state. Cunningham leads among Democrats (93%), liberals (92%), racial and ethnic minorities (73%), those concerned about catching the coronavirus (65%), city residents (64%), moderates (61%) and women (55%). Tillis is boosted by support among Republicans (92%), conservatives (85%), evangelical white Protestants (82%), those in rural areas (62%), white people (58%) and men (55%). The race is essentially tied among independents and suburban voters.

Indeed, Cunningham is supported by 92% of those who back Biden, with 5% going to Tillis. Among Trump supporters, these numbers are precisely reversed.

As in the presidential contest, the Senate race is virtually tied in three of the state’s five geopolitical regions – 49-48% in the central Piedmont region, 49-45% in the eastern part of the state and 48-45% in Charlotte, all Tillis-Cunningham. Those compare with a Tillis lead in the western counties, 58-38%, countered by a wide 65-32% advantage for Cunningham in the Raleigh-Durham area. (Tillis lives outside of Charlotte. Cunningham grew up in Lexington, in the Piedmont region, and now lives in Raleigh.)

Lastly, Cunningham, a lieutenant colonel in the Army Reserve, runs essentially even with Tillis in households that include a veteran or active-duty member of the military, 48-47%, Tillis-Cunningham. (This accounts for nearly half of likely voters in the state.) It’s also close, 50-45%, Cunningham-Tillis, in households without a veteran or current service member. This, too, is similar to the race for president: 50-47%, Trump-Biden, in veteran or current military households, and 51-46%, Biden-Trump, in others.

This ABC News/Washington Post poll was conducted by landline and cellular telephone interviews Oct. 12-17, 2020 among a random sample of 706 North Carolina registered voters and 646 likely voters. Results have margins of sampling error of 4.5 points among both groups. Partisan divisions – Democrats-Republicans-independents – are 33-32-30% among registered voters and 34-33-29% among likely voters.

The survey was produced for ABC News by Langer Research Associates, with sampling and data collection by Abt Associates of Rockville, Md. See details on the survey’s methodology here.