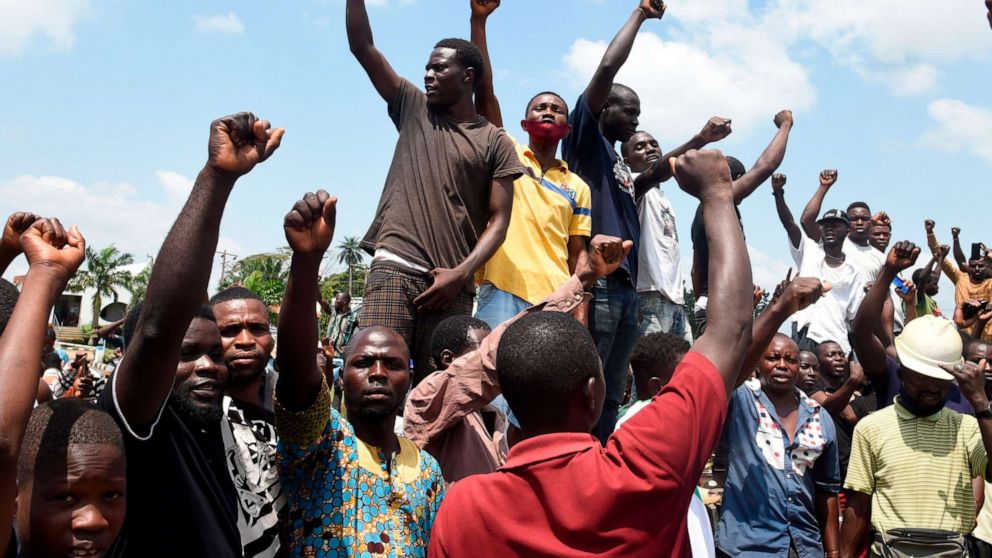 The meeting was part of a previously scheduled delegation, which included top U.S. diplomats for human rights, Robert Destro, and for conflict stabilization, Denise Natali, according to State Department spokesperson Morgan Ortagus.

“The Counselor expressed the U.S. condemnation of the use of excessive force by military forces who fired on unarmed demonstrators in Lagos,” Ortagus said in a statement Thursday night. “He expressed condolences to the victims of these shootings and urged the government of Nigeria to abide by its commitment to hold those responsible accountable under the law. The Vice President and the Counselor noted that the right to peaceful assembly and freedom of expression are essential human rights and core democratic principles.”

“Soldiers clearly had one intention — to kill without consequences,” Osai Ojigho, director of Amnesty International in Nigeria, said in a statement Wednesday night, alongside the release of the report.

Amnesty International said it also received reports that surveillance cameras at the toll gate in Lekki, a wealthy suburb of Lagos where protesters have been camped for two weeks, were removed by government officials and the electricity was cut off shortly before the shootings in what appeared to be an attempt to hide evidence. Some of those killed and injured at the protest sites in both Lekki and Alausa, another suburb of Lagos, were allegedly taken away by the military, according to Amnesty International.

“These shootings clearly amount to extrajudicial executions,” Ojigho said. “There must be an immediate investigation and suspected perpetrators must be held accountable through fair trials. Authorities must ensure access to justice and effective remedies for the victims and their families.”

U.S. Secretary of State Mike Pompeo issued a statement Thursday, condemning “the use of excessive force by military forces” and urging Nigeria’s “security services to show maximum restraint and respect fundamental rights and for demonstrators to remain peaceful.” It was the first comment to come from the White House on the situation in Nigeria, following outcry from American celebrities, lawmakers and even Democratic presidential candidate Joe Biden.

While the shootings in Lagos have prompted global outrage and have been widely condemned, the Nigerian military has denied responsibility. On its official Twitter account, the Nigerian Army has labeled numerous reports about the shootings as “fake news.”

Lagos, a sprawling financial hub of the West African nation, has been the center of weeks-long, nationwide demonstrations over a now-disbanded, widely-criticized police unit, the Special Anti-Robbery Squad (SARS). The youth-led protest movement, which uses the social media hashtag #EndSARS, has been largely peaceful, but tensions have boiled over in recent days and fires have been set to cars, government buildings and television stations. Authorities have imposed an indefinite, round-the-clock curfew in Lagos and other parts of Nigeria.

Last week, as protesters showed no signs of backing down, Nigerian President Muhammadu Buhari announced he would dissolve SARS, which operated across the country — often in plainclothes — and has been accused of assault, extortion, extrajudicial killings, kidnapping, torture, unlawful detentions and robbery.

Buhari, who is a retired general of the Nigerian Army, addressed the nation Thursday night, urging demonstrators “to discontinue the street protests and constructively engage the government in finding solutions.” He made no mention of the shootings of peaceful protesters in Lagos.

“This government will not allow anybody or (any) groups to disrupt the peace of the nation,” Buhari warned in his televised address. “For you to do otherwise will amount to undermining national security and law and order.”

“Under no circumstances would this be tolerated,” he added.

In response to criticism from fellow African heads of state and other world leaders, Buhari called on them “to seek to know all the facts available before taking a position, or rushing to judgment and making hasty pronouncements.”

Hands off Mont Blanc! France told ‘can’t do whatever you want’ amid Italy border row