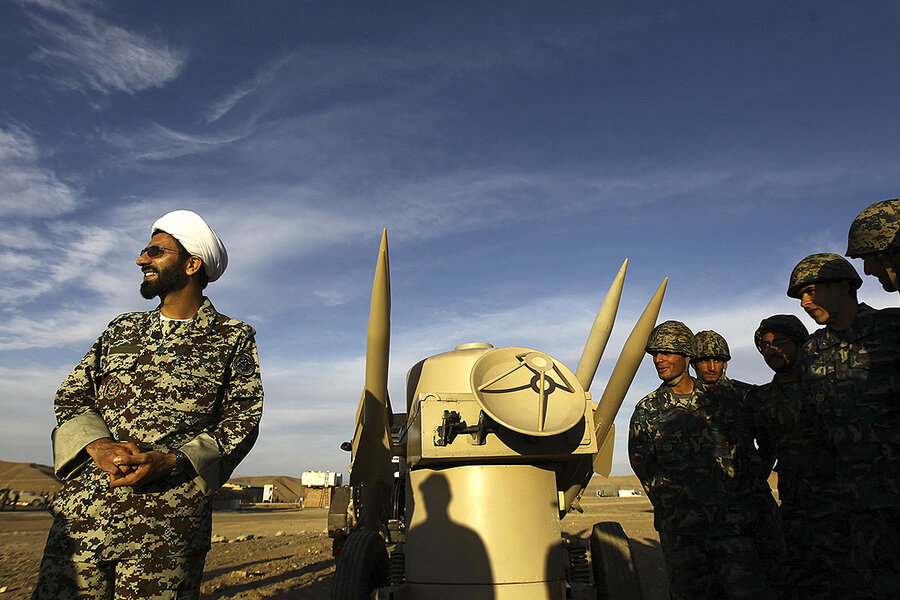 “There are a number of reasons to think Iran is poised to come back” to the agenda once the election is over, “but it’s not going to be the same debate, with the same focus on the nuclear issue to the exclusion of everything else, that we had five years ago,” says Alex Vatanka, director of the Iran Program at the Middle East Institute (MEI) in Washington.

For starters, “the big change looking over the last five years is that Iran has become so weak that it has become much easier for the Chinese – and the Russians – to use the Iranians as a pawn to undermine U.S. interests,” he says.

At the same time, the nuclear issue, while critical, no longer has a monopoly on what makes Iran a looming foreign policy concern for the U.S. “No matter who wins [the U.S. election] in November, the approach will no longer be limited to how many centrifuges [the Iranians] have,” Mr. Vatanka says. “It will have to be a much broader conversation,” including Iran’s regional activities – what the Trump administration calls “exporting revolution.”

On Sunday, a United Nations arms embargo the Trump administration said was critical to limiting Iran’s mischief in the region expired. Secretary of State Mike Pompeo reiterated the U.S. position that the embargo remains in effect – and warned that the U.S. will sanction any company that sells arms to Tehran.

The U.S. position sets the stage for a damaging confrontation between the U.S. and some of its closest allies in Europe – the United Kingdom, France, and Germany – that remain parties to the formally titled Joint Comprehensive Plan of Action, or JCPOA. They insist that the U.S. withdrawal from the deal nullifies any U.S. say over its provisions.

Also promising Iran’s return to the international agenda is evidence of progress in the country’s nuclear program. Recent International Atomic Energy Agency reports indicate that Iran’s “breakout” time to building a nuclear weapon is just three or four months, in part based on estimates of stockpiled fissile material.

That estimate is down sharply from the one-year breakout time experts assessed when President Trump pulled the U.S. out of the JCPOA in 2018.

In addition, last week a dissident group with a good track record exposing secret nuclear R&D facilities inside Iran reported the existence of what it said is a previously undisclosed military facility dedicated to Iran’s nuclear program. The National Council of Resistance of Iran said in Washington Friday that satellite imagery shows the facility, located in a military zone east of Tehran, has recently been expanded.

Even if Iran has not figured prominently in the presidential campaign, what has been said suggests stark differences between the policies of a second-term President Trump and those of a President Biden.

Moreover, those differences are also an indicator of the broad foreign policy strategies and goals each would pursue.

On Iran as well as on other issues, Mr. Trump would be expected to double down on sanctions and confrontation with allies to advance his foreign policy goals. Those goals for a second Trump administration would include more tightening of the screws on Tehran to force a return to negotiations and achieve what Mr. Trump insists would be a better deal.

Mr. Biden, on the other hand, would likely return the U.S. to a multilateral route, seeking to quickly repair relations with key allies in an effort to address international challenges including the COVID-19 pandemic and climate change – and Iran’s advancing nuclear program.

Jake Sullivan, a former national security adviser to Mr. Biden when he was vice president, said in an August webinar that a President Biden would follow the same “formula” used by the Obama administration – which he described as “leverage diplomacy backed by pressure” – to coax the Iranians back to the negotiating table.

The goal, he added, would be a new deal with Iran that makes “progress, not just on the core nuclear issues but on some of the other challenges as well,” including Iran’s missile development and support for regional proxies.

Some Republican national security experts say a Biden administration would be wise to use the “leverage” Mr. Trump’s policies have built up on a number of key foreign policy issues, including Iran.

Through frequent recourse to sanctions and threats to end security guarantees, “Trump has generated considerable leverage over adversaries and allies alike,” including Iran, writes Richard Fontaine, former foreign policy adviser to the late Sen. John McCain, in the October issue of Foreign Affairs. “A Biden administration would … do well to use some [of the leverage] Trump would leave behind.”

Nevertheless, many staunch critics of the JCPOA worry that Mr. Biden, looking to quickly rejoin the nuclear deal, would squander the position of strength the Trump administration has developed vis-à-vis Iran.

“We must not throw the regime a lifeline [or] return to the policies of appeasement,” says Robert Joseph, who was special envoy for nuclear nonproliferation under President George W. Bush.

But others say the Iranians understand that the dire economic and political straits the regime is in mean they would have to compromise with whoever is in the White House in 2021.

“The Iranians know they’d have to make some concessions on the regional front, and maybe even on the bad things they are doing at home to their own people,” says MEI’s Mr. Vatanka. “And that’s an opportunity.”