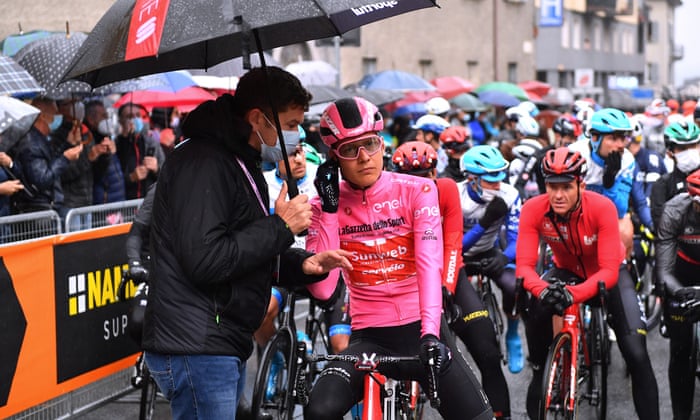 Team Ineos’s Tao Geoghegan Hart remains just 15 seconds off the overall lead after a chaotic and controversial 19th stage of the Giro d’Italia. Josef Cerny was to first to cross the line in Asti after the stage was halved in length following a protest by the riders against the conditions.

Cerny (CCC) broke away from the leading group around 22km from the end of the 123km stage and the Czech rider managed to hold on to his lead to claim the biggest win of his career. Victor Campenaerts’s late attack was in vain as he finished second.

“It’s incredible, I have no words,” Cerny said. “Today my dream has come true, I am very happy. I dedicate this success to my team and my family. I still cannot believe it, I cannot describe how I’m feeling right now.”

The stage was scheduled to run 258km from Morbegno to Asti but, shortly before the start, the riders protested about racing so far in wet conditions one day after a brutal mountain stage. After organisers agreed to their demands the race started as planned but, after eight kilometres, the riders got on their team buses and were taken to a new starting point at Abbiategrasso.

“I’m very upset about the way this has happened. It isn’t right,” said the Giro race director, Mauro Vegni. “I think there are going to be some words with lawyers here. I don’t feel it’s respectful to the race, to the people who want to watch the race. There’s no real respect. We think there [will] be consequences of the actions of the riders today.

“The stage was announced a year ago. We knew it was going to be happening in October. A rainy day in October is quite a usual thing. 13 degrees is not cold. I don’t think there are excuses.”

Bernie Eisel, the former Team Sky rider and now Eurosport pundit, said the protest had been handled badly. “[It] was really bad publicity for our sport,” he said. “The temperature and the weather were good enough to do the full distance and they could have discussed way before if they were not happy.”

Wilco Kelderman kept the maglia rosa after finishing with the peloton which crossed the line nearly 12 minutes behind Cerny. Jay Hindley lies only 12 seconds off the overall lead, with Geoghegan Hart three seconds further back. There are two stages to go in the race which finishes in Milan on Sunday.

Meanwhile, Sam Bennett sprinted to victory on stage four of the Vuelta a España, pipping rival Jasper Philipsen to victory as Primoz Roglic retained the red jersey on another gloomy day in Spain. 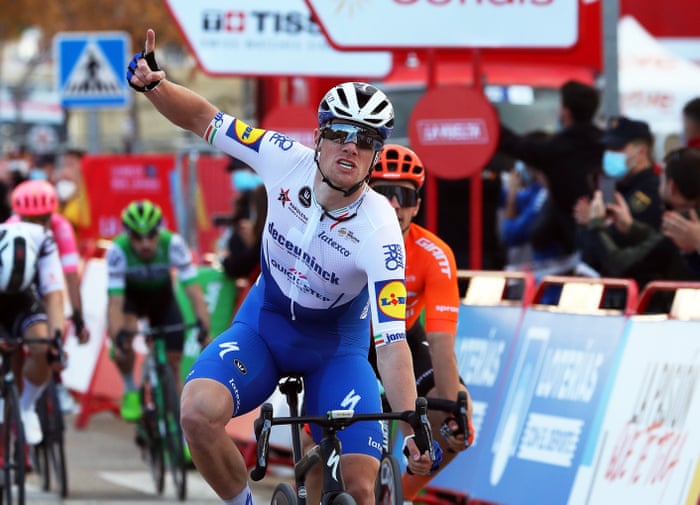 The 192km flat route from Garray to Ejea de los Caballeros saw a four-man breakaway speed off after just two kilometres. However, they were reeled in by the peloton with 15km to go as the teams lined up their sprinters for a quick finish. In the closing stages UAE Team Emirates and Bora-Hansgrohe hit the front, with Philipsen launching 200 metres from the finish.

Irishman Bennett went on the Dane’s wheel and won by a bike length to claim a third overall stage win at the Vuelta and a first of this year’s race.

There was no movement in the general classification, with Roglic remaining in the race lead and Bennett’s compatriot Dan Martin five seconds back. Saturday’s fifth stage is the kind of rolling route which might favour a breakaway as the riders tackle the 184km stage from Huesca to Sabinanigo, which features three categorised climbs.