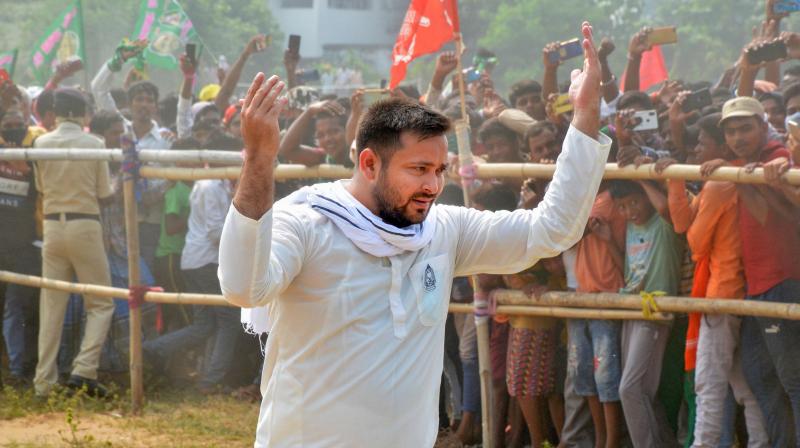 New Delhi: The Election Commission of India (ECI) has ticked off political parties in Bihar for violating social distancing norms during their poll campaigns and public meetings without wearing masks.

In an advisory to the presidents and general secretaries of the recognised national and state political parties, the ECI has expressed unhappiness over the complete disregard of its guidelines issued earlier and said chief electoral officers and the district machinery would be expected to invoke appropriate and relevant penal provisions against candidates concerned as well as organisers responsible for such violations.

In its advisory on October 9, the ECI had asked political parties to follow instructions related to COVID-19 at all stages, especially wherever public interface in physical form is involved.  “Observance of the preventive measures including wearing a mask, use of sanitizer, observance of social distancing is a duty cast upon all the stakeholders in the larger interest of public health,” the ECI had said.

It had specifically mentioned:  “As representatives of public, this onerous responsibility rests with the political parties to ensure that they not only cooperate with the district machineries in following the due norms of public health safety as prescribed, but also instill a sense of discipline for civic behavior in their cadre while doing ground management during campaign times.  It is requested that you may like to issue advisory to all your field representatives to demonstrate utmost vigil and care to abide by all the extant instructions in large interest of public health and avoid any penal action for breaching the provisions.”

Earlier, in its broad guidelines dated August 21, the ECI had also stated that non-compliance of instructions during the period of public interface will attract actions as per provisions of Sections 51 to 60 of the Disaster Management Act, 2005 besides invocation of the Section 188 of IPC and other legal provisions.

However, visuals of huge gatherings at campaign rallies in Bihar have left ECI miffed. “Instances of such public meetings have come to notice of the Commission, where large number of crowds have assembled in utter violation of social distancing and the political leaders/campaigners are addressing the gathering without wearing masks in complete disregard of the guidelines/instructions issued by Election Commission.  By doing so, the political parties and candidates are not only flouting the guidelines of the Commission with impunity, but exposing themselves as well as the public attending the rallies/meetings to the danger of infection during the pandemic,” the ECI said while adding political parties and entities are duty bound to observe the norms determined by the Commission for electioneering.

“The Commission has taken a serious view of the laxity on the part of political parties and candidates, on the ground, in terms of maintaining crowd discipline, and hereby reiterates and further advises them to demonstrate utmost vigil and care during electioneering.  CEOs and the District Machinery would be expected by the Commission to invoke appropriate and relevant penal provisions against the candidates concerned as well as the organizers responsible for such violations.  Separate instructions for strict compliance of guidelines are being issued to Chief Electoral Officers and State Governments of poll going states,” the ECI said.