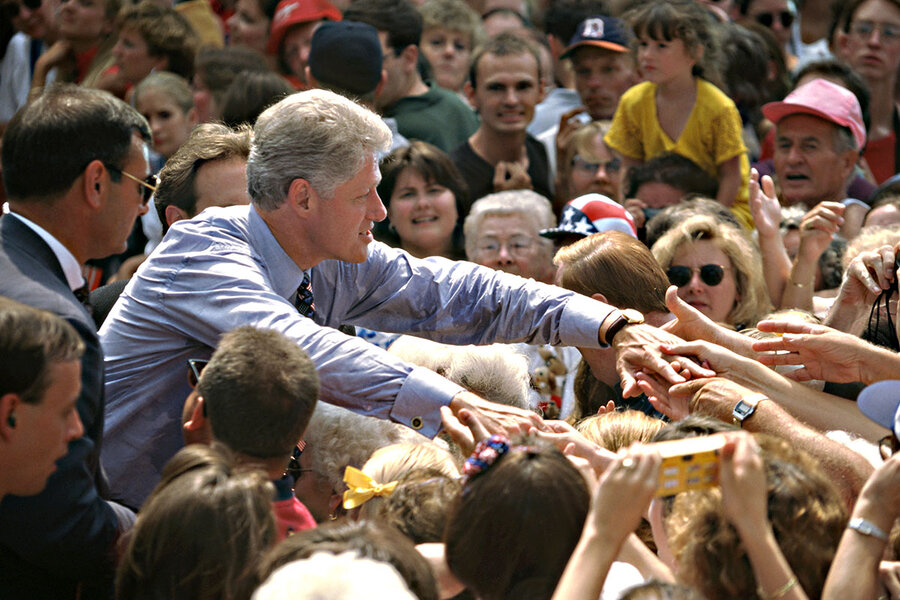 The first time I covered an incumbent president running for reelection was in 1996. That August, right after the Democratic National Convention, the Clintons and Gores boarded buses and embarked on a heartland tour through Missouri, Kentucky, and Tennessee. I joined as part of the traveling press corps.

What seemed normal then – the candidates and their spouses diving into crowds, shaking hands, posing for pictures – feels alien today. Also remarkable were some of the people who showed up at the rallies, Republicans who had no intention of voting for President Bill Clinton but came anyway, camcorder in hand, kids in tow.

“I wanted my children to see the president,” Lee Elliott, a physician in Fulton, Kentucky, told me.

Twenty-four years later, America feels hopelessly polarized, seemingly unable to find common ground on anything, from the trivial – buy a sandwich at Chick-fil-A, yes or no? – to the profoundly important, such as how to behave during a pandemic. Large majorities of Americans say declining trust in the federal government, and in each other, is making it harder to solve the nation’s problems, according to the Pew Research Center.

Books abound telling us how grim things are getting. One recent example, “Presidents, Populism, and the Crisis of Democracy,” readably analyzes the problems, then proposes solutions, including – perhaps counterintuitively – a more powerful presidency, coupled with new checks on that power. That, the authors suggest, could lead to more effective government and reduce populism.

But building a better American democracy could take a while, if it happens at all. In the meantime, how can we as individuals be part of the solution?

For starters, we can do our part to keep a fraying civil society from getting worse. One answer may be as simple as maintaining friendships, even when opinions diverge sharply.

Listening to others and understanding their concerns can help build, or rebuild, trust. Getting out of our “news silos” can also open up thought. As a political reporter, I have the privilege of talking to people with sincerely held views from across the political spectrum, and can honestly say that most Americans love their country and want the best for it and its people.

When this strangest of campaigns is over, and we know who has won, the nation will have an opportunity. We can take a deep breath, be grateful for what we have, and then set about making our “more perfect Union” even better.

As pandemic shifts, so does some Americans’ view of it

‘Made in America’ company creates fashionable bags out of recycled sails