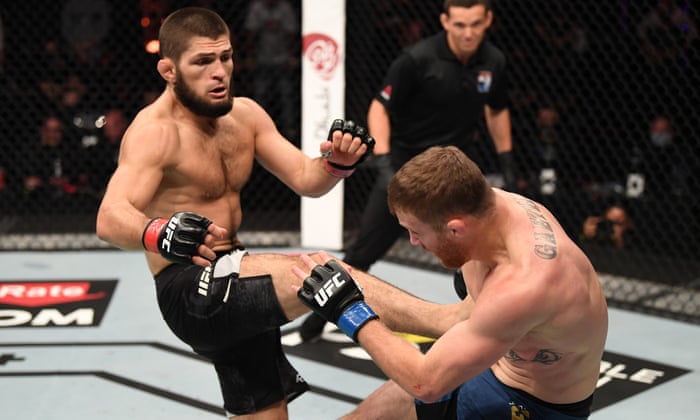 Unbeaten lightweight champion Khabib Nurmagomedov retired from mixed martial arts after stopping Justin Gaethje with a triangle choke early in the second round at UFC 254 on Saturday night.

Nurmagomedov (29-0) made the announcement immediately after he impressively finished his first fight since the death of his father and lifelong coach in July. Abdulmanap Nurmagomedov had a heart problem exacerbated by Covid-19, and his son was overcome by tears in the cage moments after choking Gaethje unconscious 1:34 into the second round of his third UFC title defense.

“This is my last fight,” Nurmagomedov said. “There’s no way I’m going to be back without my father. I spoke to my mother. She don’t know how I fight without father, but I promised it’s going to be my last fight, and if I give my word, I have to follow it.”

"This is my last fight."@TeamKhabib pays his respects following a dominant performance at #UFC254 pic.twitter.com/5HiUvJXBJC

The 32-year-old Nurmagomedov was active with strikes and with grappling against Gaethje (22-3), the dangerous brawler who had knocked out four consecutive elite opponents while winning the UFC’s interim lightweight title.

After spending the first round largely trading punches and kicks with the aggressive Gaethje, Nurmagomedov used his unparalleled wrestling skills to take down Gaethje early in the second round and then worked into position for the finishing choke.

Gaethje appeared to tap out at least twice before the referee noticed and stopped the bout, by which time Gaethje was unconscious. He bounced up quickly and shared a moment of mutual respect with the dominant Russian champion.

“I know he was in a bad spot, but whether he was or not, he did what he needed to do,” Gaethje said. “I know his father is so proud.”

Also at UFC 254, former middleweight champion Robert Whittaker made his case for another title shot with a solid unanimous decision over fellow contender Jared Cannonier in the penultimate bout on Fight Island.

Nurmagomedov’s first fight in 13 months would be an appropriate farewell for one of the most dynamic competitors in recent MMA history. The Dagestan-born grappling specialist developed a well-rounded game under the tutelage of his father and a Bay Area-based MMA gym, culminating in his ascent to the UFC title in 2018.

Nurmagomedov stopped Conor McGregor and Dustin Poirier in his next two bouts before his yearlong absence from competition. His victory over McGregor made him one of the world’s most famous combat sports athletes, and the UFC scheduled this pay-per-view show at an earlier-than-normal time to cater to his vast fan base in Russia and Europe.

But Nurmagomedov has spoken of retirement before, and his announcement confirmed he is finished with the sport after running through most of the UFC lightweight division.

“Dustin and Conor are going to fight in January,” Nurmagomedov said, referring to the probable meeting between the former contenders at UFC 257. “I choked them both out. I’m not interested in this.”

Earlier, Whittaker (22-5) gave a disciplined, active performance with impressive striking to earn his second straight UFC victory since losing his title to Israel Adesanya in late 2019.

Capping his effort by dropping Cannonier with a combination midway through the final round, Whittaker won two of three rounds on every scorecard while soundly outstriking Cannonier (13-5), who took his first loss in nearly two and a half years.

Whittaker likely earned a chance at a rematch with Adesanya with the victory, but he didn’t call out the champion after his bout, instead expressing only excitement about returning home to put up his family’s Christmas tree. Whittaker withdrew from a bout with Cannonier scheduled for March in Las Vegas because he felt burned out on MMA.

“I’m very happy it’s all over,” Whittaker said. “We got the result we wanted. Work’s done, baby. I’m coming home.”

Earlier in the show, Russian heavyweight Alexander Volkov stopped Walt Harris with a kick to the chest and punches on the ground 1:15 into the second round. Flyweight Lauren Murphy also bolstered her case for a title shot with a second-round stoppage of Liliya Shakirova by rear naked choke for her fourth straight victory.

UFC 254 was the last of five shows in a month inside the promotion’s secure bubble on Yas Island. The UFC, which paused competition for only eight weeks early in the coronavirus pandemic, returns to its hometown next week to begin a series of at least five consecutive shows on its corporate campus in Las Vegas.

Meet Tao Geoghegan Hart: the under-the-radar Brit with a shot at Giro glory