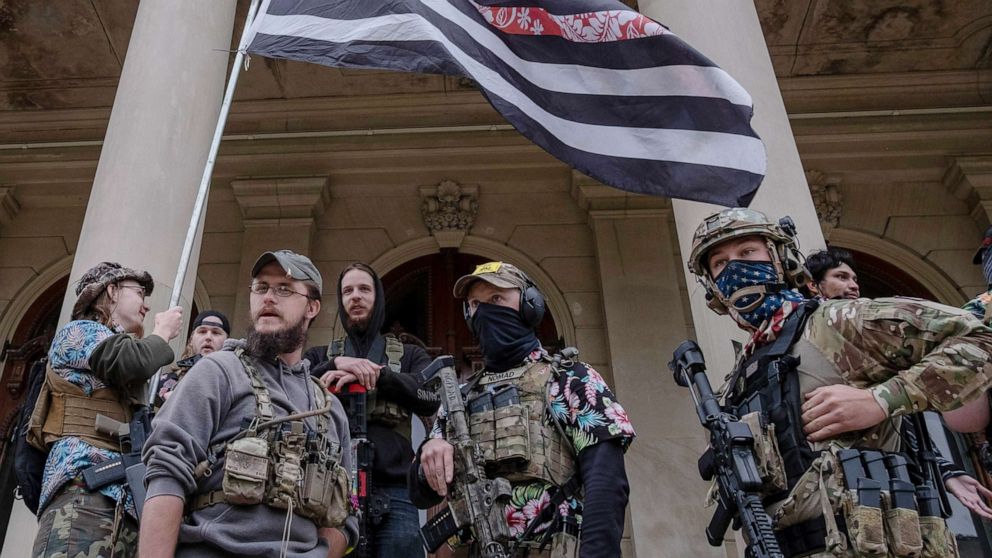 A lawsuit filed Thursday is challenging the legality of Michigan Secretary of State Jocelyn Benson’s ban on open-carry firearms at polling sites on Election Day, a directive she says is meant to “protect our voters from intimidation, threats and harassment.”

The lawsuit was filed in the Michigan Court of Claims in Lansing by Robert Davis, a labor activist and former school board member in Highland Park, Michigan, who told ABC News on Thursday that Benson’s edict is unlawful and is “creating hysteria that simply is not there.”

“This secretary of state is driven by power. It’s quite evident that this is the classic example of the most egregious government overreach that I’ve ever witnessed,” Davis said.

On Friday, Benson issued guidance to local election officials saying that she is effectively banning open-carry firearms from being brought within 100 feet of polling places, clerk’s offices and absent voter counting boards on Election Day.

“The presence of firearms at the polling place, clerk’s office(s), or absent voter counting board may cause disruption, fear or intimidation for voters, election workers and others present,” Benson’s guidance says.

Benson said she issued the directive after consulting with Michigan State Attorney General Dana Nessel, who reviewed relevant laws and legal precedent and determined that Benson has the authority to issue the directive.

“Of course, Michigan citizens have the right to bear arms and those with a license to carry a concealed weapon may continue to do so in places where that’s allowed,” Benson said. “This is not a ban on firearms, this is an effort to protect our voters from intimidation, threats and harassment on Election Day.”

Michigan does not have early in-person voting.

Officials in multiple states are taking aggressive steps to protect voters from efforts by militias or other armed groups seeking to congregate near polling places on Election Day, as simmering online activity indicates that some groups are trying to register as campaign poll watchers for President Donald Trump’s reelection campaign.

The measures come as online accounts tied to neo-Nazi sympathizers and alt-right groups such as the Proud Boys have been generating social posts that encourage supporters to join the campaign’s Election Day operations, an ABC News report found. That includes sending out links to register for the Trump campaign’s so-called Army for Trump, an effort to recruit supporters to sign up as Election Day poll watchers for the campaign.

Benson’s directive came just days after the U.S. Justice Department announced that the FBI had foiled a months-long plot to kidnap Michigan Gov. Gretchen Whitmer, a Democrat, before the November election and to violently overthrow the state’s government.

“If you begin to put that idea in people’s heads, that causes a reaction out of people,” Davis said. “People carry concealed weapons all the time, every single day. So why is the secretary of state trying to violate the law by creating this hysteria that simply is not there?”

Benson’s spokesman, Jake Rollow, said the U.S. Supreme Court has repeatedly found that the right to vote is “foundational to our democratic society and preservative of our other basic rights.”

Benson’s “narrowly tailored directive does not infringe upon the right to bear arms,” Rollow said, according to the Detroit Free Press. “It simply protects voters and election workers by providing much-needed clarity on the existing state and federal laws that prohibit voter intimidation, harassment and coercion.”

On Thursday afternoon, Judge Christopher Murray of the Court of Claims gave Benson until 1 p.m. on Monday to respond to the lawsuit. Murray said Davis had until 5 p.m. Monday to reply to Benson’s response.

A hearing date has yet to be set, but Davis said he hopes the issue will be resolved prior to Election Day.

“She is going to be the cause of this election to be challenged the week after votes have been cast, because of her unlawful actions of trying to ignore the rule of law as they currently exist in the state of Michigan for her own personal political agenda,” Davis said of Benson.

“She has no legal authority to do what she did,” Davis told ABC News. “Her intentions may be well-intended, but it loses any significance because it’s unlawful. How can you say you’re trying to uphold the rule of law, and you’re doing something illegal?”

In the lawsuit, Davis argued that the secretary of state’s directive to local clerks is essentially a new rule that she unilaterally created under state election law. The suit contends that in creating the law, Benson ignored the requirements of the state Administrative Procedures Act, including giving ample public notice, and that the edict should be ordered null and void.

Robert Stevenson, director of the Michigan Association of Chiefs of Police, said police departments do not have the authority to enforce the ban.

“The feedback I’ve been getting from our police agencies is that they’re uncomfortable trying to enforce something they clearly don’t have the authority to enforce,” Stevenson told the Detroit Free Press newspaper. “Our hope is that this will get resolved and there’ll be some clear guidance.”