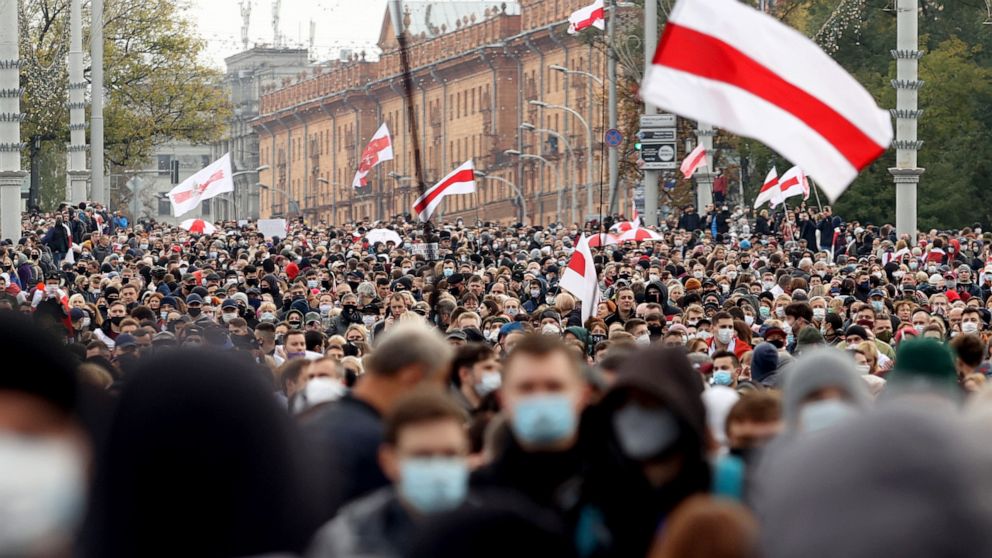 An estimated 100,000 protesters marched peacefully through Minsk in what appeared to be the largest demonstration in weeks. People were rallying ahead of an ultimatum set by the opposition for Lukashenko to step down from power.

Police did not act against the crowds in Minsk for most of the day. But as darkness fell, videos posted by local media showed police attacking a large crowd with stun grenades and appearing to open fire with non-lethal weapons. In the videos, people can be seeing running in panic as explosions and clouds of white smoke go off.

What sounded like shots could also be heard and some local media reported that rubber bullets may have been used.

There were reports of injuries among protesters. The Belarusian human rights group Vesna said over 120 people had been arrested in several cities.

Videos also showed police roughly detaining people in other towns, including in Grodno and Brest.

Huge protests have gathered in Minsk each Sunday for 11 weekends in a row since Lukashenko was awarded a sixth term in a presidential election widely criticized as rigged.

Two weeks ago, Belarus’ key opposition leader, Svetlana Tikhanovskaya, announced what she called a “People’s Ultimatum” demanding that Lukashenko resign by midnight Sunday or else face a national strike.

The ultimatum is seen as a potential moment of reckoning for the protest movement and Lukashenko’s regime after two months of stalemate. Despite the huge demonstrations, the security forces and most of the government have remained loyal to Lukashenko.

The question is whether the opposition now has the power to mobilize major strikes and civil disobedience sufficient to move the crisis into a new phase.

Large strikes that began in the early days of the protests quickly fizzled under intense pressure from the authorities.

Besides Lukashenko’s resignation, the opposition’s ultimatum had also called for all political prisoners to be freed and violence against protesters to end.

Tikhanovskaya — who is in exile in Lithuania — said the national strike should go ahead, noting the violence from Lukashenko’s security forces.

“The regime today again showed Belarusians that violence is the only thing that it’s capable of. But to explode stun grenades in a crowd of people,” she said in a statement Sunday. “That’s not strength.”

She went on, “This regime is not worthy of the Belarusian people. It means it will lose power.”

The United States, the European Union, Britain and Canada have sanctioned senior Belarusian officials over their alleged role in rigging August’s election and violence against protesters.