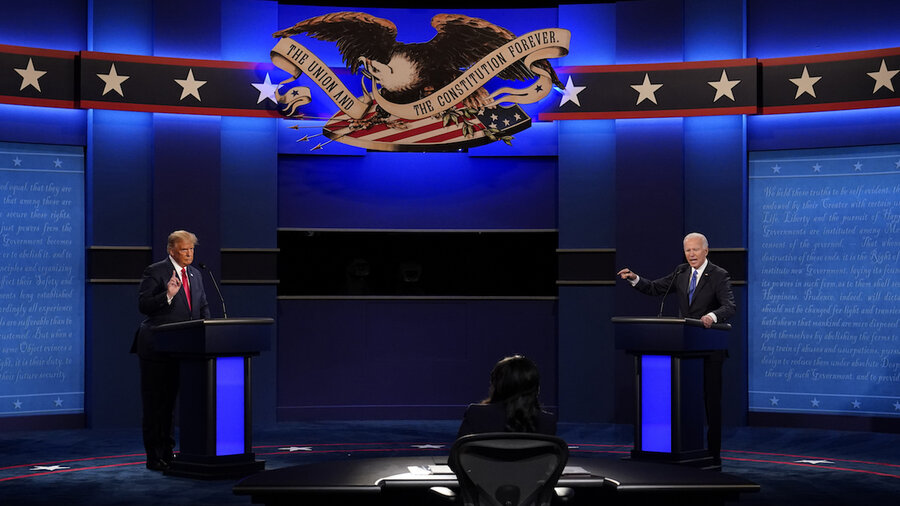 Republican President Donald Trump and Democratic challenger Joe Biden clashed over the United States’ response to climate change in their final presidential debate on Thursday, which included a stark disagreement over the future of the oil industry.

The candidates were asked at their matchup in Nashville, Tennessee, what they would do to combat climate change – the first time in a presidential debate they were not questioned on whether they believed in it or not.

“I do love the environment,” said Mr. Trump, citing a federal program to plant trees and a drop in carbon emissions.

But he said he was not willing to harm businesses in order to help the environment.

Mr. Biden said his plan for a transition to a more climate-friendly economy would create high-paying jobs and boost U.S. businesses.

“Global warming is an existential threat to humanity,” Mr. Biden said. “We have a moral obligation to deal with it and we’re told by all the leading scientists in the world we don’t have much time.”

Mr. Trump, who trails Mr. Biden in national opinion polls ahead of the Nov. 3 election, accused his rival of planning to destroy the oil industry, leading Mr. Biden to respond that he did believe the country should eventually replace oil with solar, wind, and other forms of non-polluting power.

“I would transition from the oil industry, yes,” Mr. Biden said, prompting Mr. Trump to call for voters in states where oil is an important industry to note the former vice president’s stance.

Kendra Horn, a Democratic U.S. representative from Oklahoma seeking re-election, distanced herself from Mr. Biden, saying on Twitter that oil and gas policy is “one of the places Biden and I disagree.”

After the debate, Mr. Biden told reporters he was referring to a plan to stop subsidizing fossil fuels.

Mr. Trump also accused Mr. Biden of planning to ban hydraulic fracturing, a process of extracting natural gas from shale that is opposed by many environmentalists. Mr. Biden said he would ban fracking on federal land only. Fracking is an issue in western Pennsylvania, a crucial battleground state in the election.

Environmentalists have complained for years that the candidates’ views on climate change have not been emphasized in presidential debates.

But heat waves and wildfires in the Western U.S. and uncommonly powerful storms battering other parts of the country have put climate issues in the spotlight.

For many voters, however, climate has been surpassed by the COVID-19 pandemic, jobs and the economy, and racial justice as issues of top importance in choosing a presidential candidate, Reuters/Ipsos polling shows.

“Climate is a long-term concern, as opposed to joblessness, which is today, or a pandemic, which is today,” said political scientist Larry Sabato, who heads the University of Virginia’s Center for Politics.