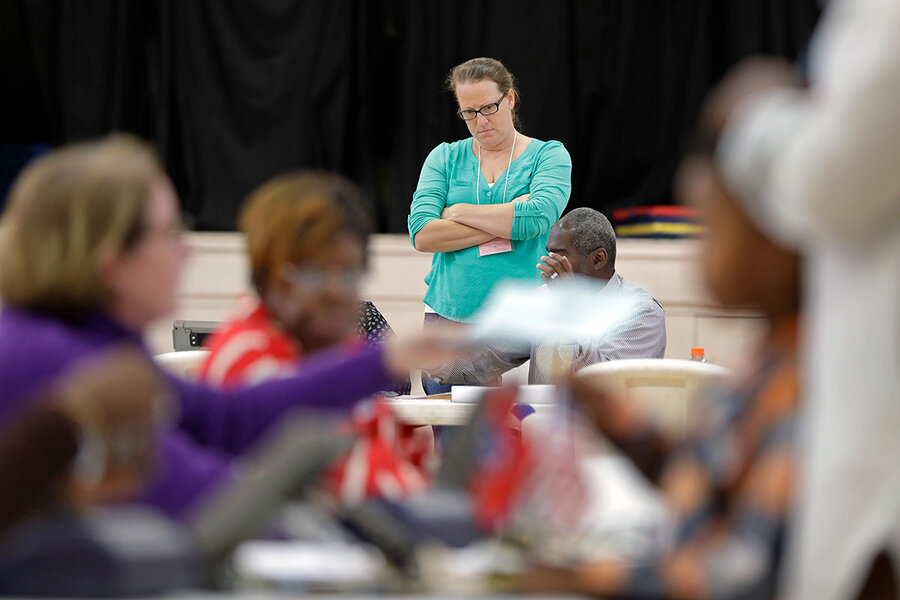 On Election Day 2016, Jane Grimes Meneely arrived at a Nashville, Tennessee, community center ready to put her three-hour poll watcher training to use. Sent by the Clinton campaign, she wore a badge around her neck and a bright blue “ELECTION PROTECTION” sticker on her back.

Her job: Report concerns, but don’t interact directly with voters.

Over her six-plus-hour shift, however, Ms. Meneely says she never had to use her authority because the day “went really smoothly.”

“There was a part of me that wanted to use the training … but also thankful that I didn’t have to,” she says.

Designated poll watchers like Ms. Meneely are a traditional part of the American election system.

But the role of poll watching is getting heightened scrutiny since President Donald Trump, at the September presidential debate, urged supporters to “go into the polls and watch very carefully.”

That call, paired with the president’s persistent, unsubstantiated claims of widespread voter fraud, raises the question of trust in the elections, the fairness of which is fundamental to the democratic process. Voting rights advocates and Democrats see it as potential encouragement of interference, even intimidation, at the polls.

Though the president may question the integrity of the election, citizens should not be dissuaded from voting by mistrust or intimidation, say election experts. To help bolster confidence, they stress the importance of understanding protections in place that restrict who can interact with voters – and how.

“Voters should not be afraid to exercise that fundamental right to vote at polling places,” says Eliza Sweren-Becker, voting rights and elections counsel at the Brennan Center for Justice.

Laws that govern the American election process are hard to generalize, because the Constitution grants states broad authority to run elections on their own terms. Rules also vary between counties.

Attempts to “intimidate, threaten, or coerce” voters, however, is a federal crime, and states have similar statutes that safeguard ballot casting. Given the decentralized nature of U.S. elections, it’s hard to determine the extent of voter intimidation at the polls. The American Civil Liberties Union calls it “rare and unlikely.”

Poll watchers – also known as election or political observers – are meant to support transparency and fairness. They generally can report concerns at polling places or during ballot counting. Poll watchers are distinct from the poll workers who run elections in the country’s roughly 170,000 precincts.

Prototypes of modern-day poll watchers were the “party agents” who emerged around the 1830s, says Richard Bensel, professor of government at Cornell University in Ithaca, New York. Before the adoption of the secret ballot in the 1890s, party agents could publicly challenge voter eligibility, often without hard proof.

The role of today’s poll watchers is limited. Typically they are appointed in advance of an election by a candidate or political party and can be restricted in number per polling place. Battleground state Wisconsin is an exception, where anyone except for candidates themselves can observe within designated areas, though further local restrictions may apply. Statutes in some states including Georgia, North Dakota, and South Carolina require poll watchers to wear a badge bearing their name and organization.

“They are really only there to observe, so they can’t talk to or interact with voters. They’re not supposed to interfere with the [voting] process at all,” says Ms. Sweren-Becker.

Similar calls by Mr. Trump to monitor polls en masse were issued in the 2016 elections, but they have been eclipsed by cybersecurity concerns and foreign interference, says Tammy Patrick, senior adviser for the elections program at Democracy Fund and former election official for Maricopa County, Arizona.

“Thankfully, we haven’t seen [intimidation at the polls] manifest in a widespread way,” she says, adding that it has been on the radar for election officials long before Mr. Trump came onto the scene. As far back as 1999, when the Columbine High School shooting massacre in Colorado shook the nation, election officials have braced for trouble by preparing contingency plans.

Political observers are typically trained by the entity that appoints them. Ms. Meneely, in Nashville, was trained through the Clinton campaign, for example. Training can involve a review of proper behavior and how to report concerns, such as illegal voting, tampering with equipment, or other perceived interference. Maricopa County’s curriculum prepared by Ms. Patrick includes reminders to observe officials’ instructions and stay six feet from ballot boxes or voting booths.

The Trump campaign says it expects to exceed its goal of 50,000 trained poll watchers in this election, but did not respond to a Monitor query about whether that goal has been met. Echoing his father’s expectations of massive fraud by the “radical left,” Donald Trump Jr., in a campaign video last month, implored “every able-bodied man [and] woman to join Army for Trump’s election security operation,” including during early voting, by signing up online.

Officials including the FBI director have dismissed the notion of widespread voter fraud historically in a major election. The conservative Heritage Foundation has tracked 1,298 proven cases of voter fraud in thousands of elections nationwide since 1982.

“In a sense, these calls could be heard as proverbial dog whistles for signaling [Trump’s] supporters to intimidate Blacks and Latinos in particular,” says Atiba Ellis, professor of law at Marquette University Law School. He considers the president’s talk akin to Jim Crow-era intimidation of voters of color, who gained heightened protection with the Voting Rights Act of 1965.

The Trump campaign says it is committed to “every voter’s right to vote.”

“President Trump’s volunteer poll watchers will be trained to ensure all rules are applied equally, all valid ballots are counted, and all Democrat rule breaking is called out,” wrote deputy national press secretary Thea McDonald in an email to the Monitor.

This presidential election marks the first in four decades that the GOP hasn’t needed court approval to carry out what it deems “ballot security” activities. During a tight race for New Jersey governor in 1981, the Republican National Committee helped assemble a National Ballot Security Task Force of armed, off-duty law enforcement officers to patrol polling sites in minority communities. The Democratic National Committee sued the GOP, alleging voter intimidation. In a settlement, the Republicans entered into a consent decree that expired in 2017.

The Democratic National Committee did not clarify how many poll watchers have been trained this year as part of its national “election protection” initiative in response to a Monitor request. An official did note in an email that the DNC’s “historic investments” include 28 state voter protection directors and filing litigation to expand access to voting.

The scope of Pennsylvania poll watchers’ access was tested in Philadelphia this month. A judge denied the Trump campaign’s request to allow poll watchers at the city’s new voter registration and ballot drop-off offices because they are not polling places.

New election infrastructure has been introduced in many precincts, especially as mail-in voting has expanded during the pandemic. Some states that ran vote-by-mail elections prior to the outbreak haven’t permitted poll watchers at ballot drop boxes.

Election roles differ in title and authority depending on jurisdiction. Michigan, for example, allows for challengers to raise questions about a voter’s eligibility. Blurring definitions further, some people use the term poll watchers to describe individuals who engage in unofficial monitoring outside polling places.

International and other nonpartisan observers can engage in election protection with varying levels of access to the voting process. Electioneering typically takes place beyond a buffer around a polling place, beyond which individuals can engage in political speech; but prohibitions on voter intimidation still apply.

Questions about casting your ballot? Contact your local board of elections, or visit www.usvotefoundation.org, for guidelines specific to where you live.