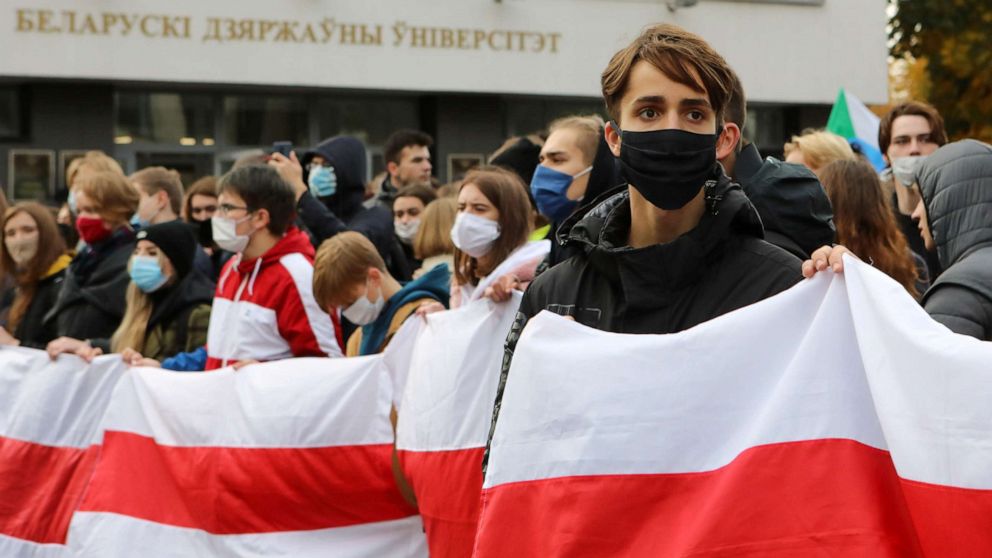 MOSCOW — Workers and students across Belarus declared strikes on Monday, heeding a call for a national strike to try to force authoritarian leader Alexander Lukashenko to resign at the start of what could be an important week for the country’s protest movement.

The strike was called by Belarus’ main opposition leader, Svetlana Tikhanovskaya, in response to Lukashenko ignoring an ultimatum to step down by Sunday night.

The call to strike is seen as a potential major test of the strength of the protest movement to break a stalemate with Lukashenko, who has not been forced from power despite more than two months of enormous protests that were triggered by accusations of a rigged presidential election in August.

But on Monday, while some workers did strike and a sizable protest took place in the capital of Minsk, it did not appear that strikers had been joined by significant numbers of workers at the massive state plants that are critical to Belarus’ economy.

At the Minsk Tractor Factory, a vast complex that employs around 30,000, most workers were reported to have come in for their shift as normal, and similar situations were reported at other major plants.

Videos posted on social media by some opposition channels did show workers walking out of some factories, including the Atlant factory in Minsk, which makes refrigerators. Three hundred workers from the High Technologies Park in the capital were seen forming a human chain along the roadside. They were dispersed by police but later returned.

Those striking faced tough pressure from the authorities. At the huge Grodno Azot plant, a key chemical factory in western Belarus, around 100 workers who gathered to strike were confronted by police, who arrested at least 30 of them.

Dozens of small businesses in Minsk, including shops and cafes, did close on Monday, according to local and foreign reporters on the ground.

In Minsk, thousands of pensioners and students marched through the city center in one of the largest weekday protests in weeks. All day, police in balaclavas appeared in vans near the protests, occasionally leaping out and grabbing people. After nightfall, riot police were seen roughly dispersing a smaller crowd of demonstrators. A local rights group, Vesna, said at least 235 people had been detained.

In a statement on Monday evening, Tikhanovskaya thanked everyone who had taken part in the strike, saying the workers who had joined were “heroes.”

“We have irreversibly defeated the fear that the regime can put down the protest,” said Tikhanovskaya, who was forced into exile shortly after the election in August. “The protest will end only when we reach our goals.”

Strikes involving thousands of workers began in the early days of the protests following August’s election, but they quickly fizzled under pressure from authorities who threatened to fire workers after detaining key opposition leaders, forcing some into exile

Tikhanovskaya’s ultimatum, announced two weeks ago, is seen as an attempt to break the deadlock between the protesters and Lukashenko’s regime. Since August the huge peaceful protests have continued each Sunday, but the security forces have remained loyal to Lukashenko and for now neither side has seemed to be strong enough to defeat the other.

On Sunday before the new strikes, massive peaceful protests again flooded central Minsk, with an estimated 100,000 people — the biggest crowd in weeks — rallying ahead of the ultimatum.

At the end of Sunday’s protest, police attacked demonstrators, launching a barrage of stun grenades at the peaceful crowd. The Interior Ministry said it had arrested over 500 people across the country.