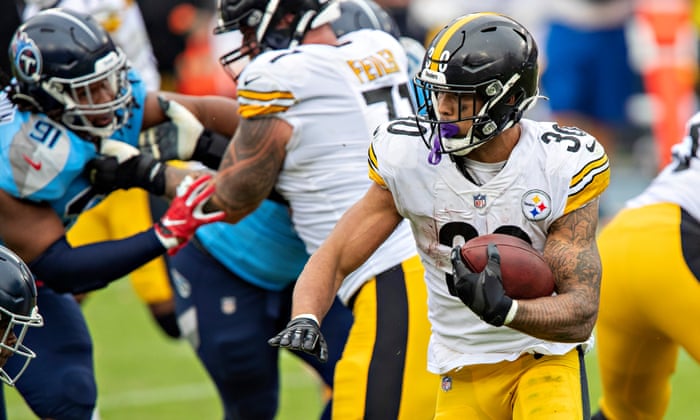 Henry entered the game as the first running back in NFL history to rush for more than 200 yards in three successive games. But it was an overreliance on Henry on Sunday that saw the Titans stall.

Vrabel is a savvy tactician, unafraid of bucking football orthodoxy. As the league has shifted to a pass-only league, Vrabel is leaning into a wide-zone-based, ground attack.

The Titans’ formula for success this season has been simple: Henry thuds into the line, beating up the defensive front or charging past it; the passing game is built around play-action attack; a feisty defense focuses on forcing turnovers; there is a smattering of offensive ingenuity, be it Henry in the wildcat, getting Ryan Tannehill out of the pocket or RPOs; Tannehill makes big-time throws when big-time plays are needed. When it’s all clicking, it’s tough for any team to stop.

But Vrabel has also proven to be stubborn. A coach should never confuse ideology with the correct strategic response to a specific situation. The Steelers’ defense is not the Bills’ defense or the Texans’ defense or whatever it is the Jaguars are chucking on the field. Yet Vrabel stuck to the same plan: run on early downs; get creative on the later downs.

The Steelers were having none of it. Pittsburgh has the No 1 run defense in the NFL, and it throttled the Tennessee rushing attack on Sunday. Henry couldn’t find any rhythm despite the Titans running the ball on five of their eight first downs; they picked up a total of seven yards and led to three three-and-outs. It wasn’t working, but Henry continued to woodpecker away in the hopes the dam would break at some point.

It didn’t work. Henry rushed 20 times for just 75 yards at an average of 3.8 yards per carry. Vrabel et al refused to throw on first down. Refused to believe that by threatening to pass it might open up the run game, just as their run game so often acts as the sparkplug for the team’s passing game.

Vrabel’s stubborn approach played into Pittsburgh’s hands. But the victory was as much about the Steelers’ legitimacy as a genuine Super Bowl contender as it was the Titans’ plan. The two teams put their best units up against one another and the Steelers came out on top.

The game represented only the fifth time in league history that two sides who were 5-0 or better have faced off in Week 7 or later. On each of those occasions, the winning side have gone to play in the Super Bowl.

And the Steelers certainly have that look. Pittsburgh’s defense has hit on the perfect recipe.

They are smart, stay within themselves, and execute the little things that win games. And yet they also roll four-deep with out-and-out game-wreckers, players who can, at any time, single-handedly shift the tenor of a drive or game: Minkah Fitzpatrick; TJ Watt; Cameron Heyward; Stephon Tuitt.

The brilliance of all four is that their excellence – their dominance, really comes from playing within the scheme. Watt and Fitzpatrick have some freelancing tendencies. But more often than not their game-changing plays come by executing within the scheme at the highest of possible levels.

The Steelers’ offense is limited. Quarterback Ben Roethlisberger is not the Ben Roethlisberger of old. He is just old. There are still flashes of vintage Big Ben hidden in there, but he is now marshaling a don’t-throw-it-away offense. Get to 25 points and back the defense, that’s the mantra.

Roethlisberger delivered on Sunday. Tennessee entered Week 7 with the worst third-down rate of any defense in the league (57%!) and Roethlisberger took advantage: The Steelers completed 13-of-17 third downs, including a third-and-14 and a trio of third-and-12s.

The game was sloppy and choppy in the second half. The Titans brought it to within three with 10 minutes to go. But the Steelers early plan – drain the clock, shut down Henry – proved too much for the Titans to overcome. By the time Vrabel shifted plans, the game had all but gone.

There’s still plenty of football to play. Next week’s matchup against the Ravens will serve as another test of whether or not Pittsburgh are capital-C Contenders. But at this point, it’s clear that the Steelers have the blend of system and playmakers that defines a championship team.

Todd Gurley tried to stop from scoring to run the clock out, but couldn't hold up.

The Lions scored the game-winning TD with 0 seconds on the clock.

Only for the Falcons would scoring a late-game touchdown while losing be a bad thing. You almost have to rewind to double-check that, yes, that is the Lions defenders who are raising their arms as they see Atlanta running back Todd Gurley break the plane and score a touchdown with just over a minute left on the clock.

This being Atlanta, of course the Lions drove the length of the field with a minute left. Of course Matthew Stafford was able to bob and weave in the pocket to extend plays and push the ball downfield. Of course the Lions were able to score as time expired. And of course Lions kicker Matt Prater split the uprights to give the Lions the win. Only Atlanta.

A rough outing for Aaron Rodgers in Tampa Bay last week started another round of Is this it for Rodgers? conversations. The Green Bay quarterback replied with a typically brilliant performance against the Texans. He finished the game 22-for-34, throwing for 283 yards and four touchdowns.

Last week, Rodgers looked confused by the Bucs’ sophisticated defense. This week, he was more assured and controlled, with a couple of Rodgers-like splash plays tacked on for good measure. Packers coach Matt LaFleur was able to manipulate some easy throws for his quarterback. At this point, using any kind of misdirection or motion against the Texans defense is borderline cruel. But when Houston did find a rare counter to LaFleur’s designs, Rodgers delivered flashes of his signature brilliance.

At 36, in his 16th pro season, his genius remains in full bloom. Don’t argue about it. Just enjoy it.

“This week Mike McCarthy was saying that there is research that shows once a team has four division wins it’s likelier to win the division” – Kim Jones, NFL Network

McCarthy diving deep into all the new-fangled analytics there. More wins in a division would indeed increase your odds of winning the division. But the Cowboys didn’t win this week; they were pummelled 25-3 by Washington, an equally tepid side with a feisty defense.

Is it time to start considering McCarthy as a one-and-done candidate? Firing a coach early is not the way of Jerry Jones or the Jones family. Usually, Cowboys ownership hangs onto a coach a season or two (or three or four) too long. But the signs aren’t good for McCarthy: the Cowboys lead the league in turnovers; they have been abysmal on both sides of the ball; there are already reports of friction in the locker room between the coaching staff and the players; two players spoke to NFL Media’s Jane Slater last week and accused McCarthy of being “totally unprepared”.

It’s often a vapid, coach-speak thing to point out, but with Dallas it’s real: The team has no fight. The Cowboys have sustained injuries this season, they lost backup quarterback Andy Dalton on Sunday to an egregious hit, but so have Washington. Yet Ron Rivera’s side looked like they had and a plan and wanted to play. For large portions of Sunday, it looked like McCarthy’s players would rather be anywhere else.

Tom Brady and Rob Gronkowski have now connected on 92 career touchdowns (including the playoffs), tied for the second most in NFL history with Steve Young and Jerry Rice. Brady and Gronkowski trail only Peyton Manning and Marvin Harrison (114 touchdowns).

It is official: Tom Brady will play until he is 100 years old. Brady is getting better and better as the season goes along. Who would have thought it, a quarterback would improve the longer he spends in a new system with his new teammates?

Brady is still limited in some ways compared to the player he was a decade ago – he’s more passive in the pocket, less willing to stare down the barrel of the pass rush – but he’s just as good from the neck up and still has as much arm strength as he did three, four, six years ago. The Bucs are genuine contenders. Oh, and Antonio Brown is set to join the team next week. 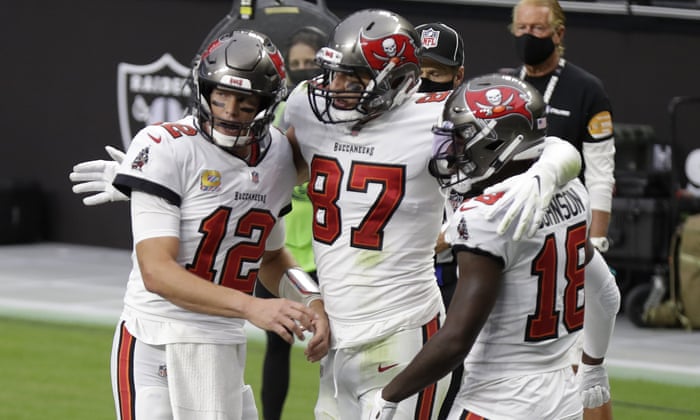