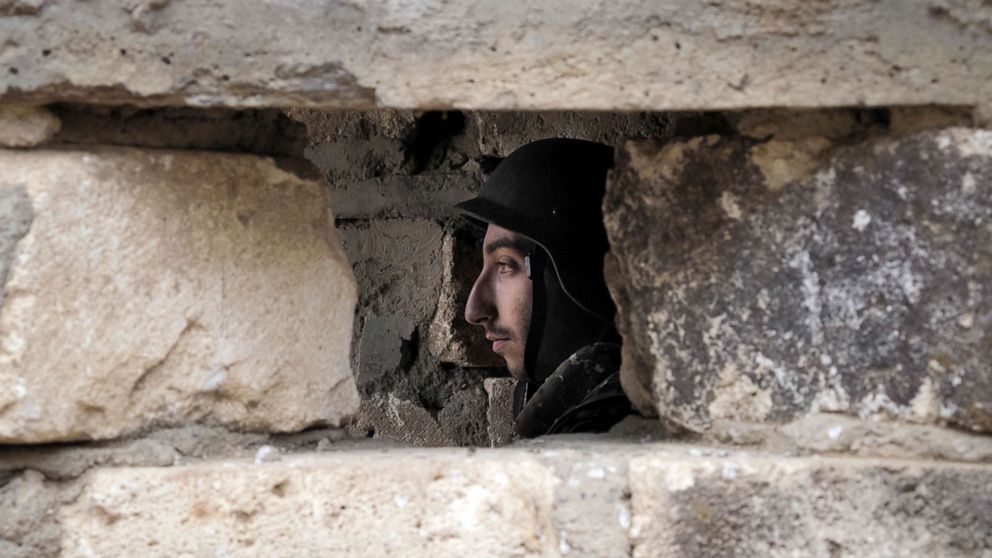 MOSCOW — A ceasefire brokered by the United States between Armenia and Azerbaijan appears to have collapsed without ever having taken hold, as heavy fighting continues between the two and Azerbaijan has appeared to seek to make military advances.

The ceasefire was announced on Sunday to begin on Monday morning, but within minutes both sides accused each other of violating the agreement and fighting has intensified since.

The truce was the third attempt in three weeks to establish a ceasefire first brokered by Russia to stop the war between Armenia and Azerbaijan over the disputed enclave of Nagorno-Karabakh.

While exact figures are uncertain, thousands may have died and tens of thousands of civilians may have been forced to flee after Azerbaijan launched an offensive seeking to retake the region, based on numbers released over the past month and analysts’ estimates.

The U.S., Russia and France, which head the so-called OSCE Minsk Group that mediates the conflict, have tried to negotiate a ceasefire. The first two attempts led by Russia and then France also quickly unraveled.

The latest ceasefire was agreed upon after Secretary of State Mike Pompeo hosted separate meetings with Armenia and Azerbaijan’s foreign ministers in Washington D.C., last week.

But after a day when fighting continued unabated Armenia’s prime minister Nikol Pashinyan late Monday tweeted, “the efforts of the international community, this time brokered by the #UnitedStates, to establish a ceasefire, have failed,” blaming Azerbaijan.

Intense fighting reportedly continued on Tuesday and Armenia’s defense ministry accused Azerbaijan of firing directly on border units in Armenia, outside Nagorno-Karabakh. Azerbaijan has accused Armenian forces of firing into Azerbaijan, including a missile strike that it alleged killed several civilians.

Pompeo on Tuesday called Pashinyan and Azerbaijan’s president Ilham Aliyev and urged them to observe the ceasefire, according to the State Department.

The ceasefire was the U.S.’ first attempt to take the lead in brokering a ceasefire for the current fighting. President Donald Trump told reporters in Pennsylvania on Monday the ceasefire was “holding.” And a day earlier, Trump told a rally in New Hampshire that he was going to “straighten out” the conflict, calling it an “easy one.”

Trump in recent days has spoken more about the conflict, and at the rally he praised Armenians, promising to stop the war for them and calling them “incredible people,” in what some have seen as an attempt to win support from the large diaspora in the U.S.

Pashinyan in a speech on Monday said the failure of the ceasefire to take hold was becoming an issue in the U.S. election.

“In the case of the United States, the issue is getting more urgent due to the election campaign there, and it is actually about President Trump’s ability to influence the international situation,” Pashinyan said.

In the days before the ceasefire announcement, Azerbaijan has appeared to make significant military gains, moving closer to a key strategic area known as the Lachin corridor, that connects Armenia to Nagorno-Karabakh. The move prompted alarm from international experts that if the war continues in this direction, it could lead to a humanitarian catastrophe, raising the spectre of ethnic cleansing.

Armenia’s military has said that Azerbaijan has made advances in the south of the enclave, on Sunday night taking the town of Kubatlu (Qubadlı) and had approached the outskirts of Syunik, the Armenian province that borders Lachin.

The current military conflict dates back to the collapse of the Soviet Union in the late 1980s when Armenia and Azerbaijan fought a 6-year war for control of Nagorno-Karabakh, a mountainous region between the two countries. That war was estimated to have killed 20,000 people and displaced hundreds of thousands.

It left Nagorno-Karabakh under an ethnic Armenian government and a majority Armenian population, but the territory remained recognised internationally as Azerbaijani. Azerbaijan has never accepted the loss of the enclave and the conflict has flared periodically for three decades.

But there has been nothing like the current fighting since the 1990s war. The conflict has been fundamentally altered by the involvement of Turkey, which is backing Azerbaijan far more aggressively than it has in the past, providing weapons and military advisers. It has also been accused of recruiting mercenaries from Turkish-backed Syrian rebel groups that are fighting for Azerbaijan.

Most outside observers believe there is little desire for a ceasefire from Azerbaijan, which has said any truce can only be temporary until Armenia agrees to withdraw from Nagorno-Karabakh — which Azerbaijan’s President Aliyev in a fiery speech on Monday again pledged to ensure.

Aliyev has said Azerbaijan is fighting to force Armenia to fulfil a peace plan that was agreed upon following the 1990s war that would return occupied territories. Aliyev has pledged to return full control of Nagorno-Karabakh itself.

“We are on a righteous path, united as a fist,” Aliyev tweeted on Monday.

Russia which has close ties with both Armenia and Azerbaijan on Tuesday urged Turkey to use its influence to halt the fighting.