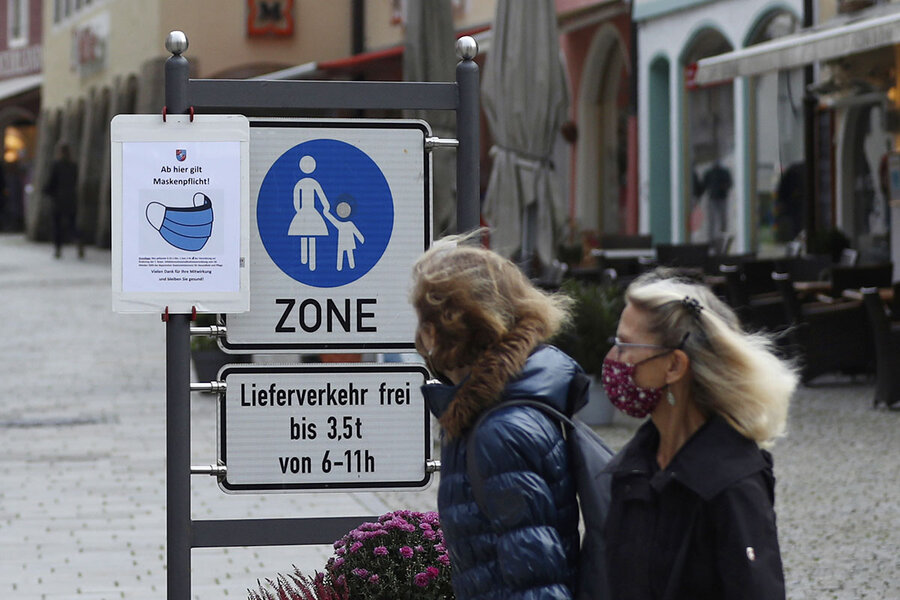 The blanket ban on leaving homes felt draconian, says Ms. Case, a Liverpool resident whose income suddenly evaporated. But the country rallied in solidarity around touch points such as Prime Minister Boris Johnson’s getting sick and a 99-year-old war veteran walking his garden for charity.

It feels different this time, as coronavirus caseloads surge past spring highs across Europe. Hospitals are filling up again. “[We] are becoming tired. We’re in murky water,” says Ms. Case. “Perhaps that’s the natural psychological course, but the mountain to overcome mental fatigue is bigger than I first thought.”

The numbers are rising rapidly. Britain has logged more than 150,000 new cases in the last week, while France recently topped a daily record of 52,000 new infections. Governments are weighing reintroducing new restrictions in response, in hopes of replicating successes from the spring.

But the U.K., Spain, France, Italy, and Germany are battling a new enemy alongside the virus: “coronafatigue.” Their publics are confused, apathetic, and angry. Across Europe, support for containment policies dropped from nearly 70% in spring to about 50% of respondents during summer, according to a June survey across seven European countries. That will make the months ahead, when many forecast an increase in cases, more difficult to manage.

“People calling hotlines are much more aggressive, and people are less accepting of measures such as why they can’t visit grandma in a nursing home,” says German press officer Tobias Frohnert, of efforts by his district of Herzogtum Lauenburg to test and trace a newly unwilling public. “People are angry.”

In Italy, “back to square one”

Italy’s early, devastating experience with COVID-19 had the Western world taking notes. But new restrictions have been met with weariness – and even civil unrest.

Following protests in Naples and Rome over the weekend, the Italian government announced a new decree Sunday shuttering all cinemas, theaters, gyms, and pools, and requiring bars and restaurants to close by 6 p.m. Curfews in some regions require people to be home by 11 p.m.

There was further unrest in Italy late on Monday. In Turin, protesters set garbage bins on fire and looted luxury outlets. And in Milan, Italy’s financial hub, police fired tear gas as demonstrators gathered outside the offices of the regional government of Lombardy.

Amid predictions that gross domestic product would shrink by 10%, Italians are despondent. “It feels like all the sacrifices we made during the spring were for nothing,” says Claudia, who runs a hair salon in central Rome. “We’re back to square one.”

Among the most compliant in Europe, Italians had been donning masks in public even during summertime. Still, the country’s prime minister felt he needed to recruit Italy’s most famous social influencer for a public service announcement.

Fashion blogger Chiara Ferragni and her rapper husband, Fedez, who together have 32 million followers on social media, said the call was “very unexpected.” But they were happy to help. “We can avoid [another lockdown] with a simple gesture – guys, wear a mask,” posted Fedez on Instagram.

For example, the national government has told mayors they can close off piazzas and streets if overcrowding becomes an issue. And, instead of orders, there are pleas: “The situation is extremely serious,” Health Minister Roberto Speranza told television channel La7. “I ask people to avoid needless movements, avoiding going out when it is not necessary.”

For a country that brought infections down to 200 a day during the summertime, recent case numbers are especially painful: between 15,000 and 21,000 a day.

Uncertainty, infighting in Spain and France

In Spain, residents are frustrated by a whiplash-like approach to pandemic restrictions, and political infighting that’s confusing residents about who’s in charge.

“You wake up on Monday to start the week and the measures are A, B, C, and then on Tuesday there are new measures in place,” says Alfredo Ramos, a Madrid resident. “I see all of this with a lot of uncertainty.”

In early October, the center-right government of Madrid – a coronavirus epicenter with roughly a third of Spain’s case counts and deaths – challenged the national left-wing coalition in court over tightening controls. It has also sparred over the use of a national “state of emergency.”

This week, Spain’s national government announced a six-month state of emergency, which gives regional leaders the ability to impose measures to tackle the pandemic. Curfews have also been imposed in all regions save the Canary Islands, through at least early November.

Still, like Italy, Spain still hasn’t gone into a full lockdown, even while showing high virus numbers. “Strong polarization is affecting the decision-making,” says Josep Lobera, a professor of political sociology at the Autonomous University of Madrid.

Just northeast in France, where cases are increasing significantly, Parisian Brendan Jannic is frustrated by a government that he says infantilizes its people and whose rules are unclear. They are angry not because of restrictions, but because of “how the government talks to us,” says Mr. Jannic. “I just need them to tell me the rules.”

For example, authorities mandated mask-wearing only on certain streets in Paris in August, before declaring them mandatory in all public spaces. The government has also talked down to its people by scolding them for being irresponsible, for misbehavior, or for not being “disciplined enough,” says Raul Magni-Berton, a political scientist at Sciences Po Grenoble.

Buy-in from society is critical to managing a pandemic, yet trust in government has been low under Emmanuel Macron. “If society reacts in a coordinated way, it’s definitely the best thing for a pandemic,” says Mr. Magni-Berton.

The battle between Manchester and London

In England, a British doctor working for the National Health Service plans to flout a travel ban to visit her family. “I’m 100% considering going to Wales and breaking [a travel ban between coronavirus hotspots], especially if restrictions stay over Christmas,” says the doctor, who asked not to be named for fear of losing her job. “I’ve already been without my family from January to August.”

Fatigue is heightened in the northwest of England, especially Manchester and Liverpool, where severe restrictions remained even through summer.

Two key moments have worn away public trust. The first was a road trip by a Boris Johnson aide at the height of the first wave, undermining the government’s narrative about following rules. Mr. Johnson’s by-the-regions approach is the second turning point, as it has pitted regions and localities against each other as they lobby for financial assistance on a deal-by-deal basis. Even mayors are seemingly fighting others for access to central government purse strings.

Manchester, the heart of Britain’s Industrial Revolution, feels particularly aggrieved. Mayor Andy Burnham, who told the national government he wouldn’t lock down the city without financial assistance for the struggling hospitality sector, became a figurehead of resistance.

“This is the most serious fallout since the 1980s,” says Andrew Russell, professor of politics at the University of Liverpool, of the battle between local and national governments. “In the early days of lockdown, there was a rallying around the national government. … [Now] the battle between Manchester and London has plugged into a long-standing skepticism that government is done by London and imposed on the rest of us.”

Overall, Britons are still mostly abiding by restrictions. In England’s strictest tier, households are refrained from mixing, pubs can remain open if they serve food, and residents are advised against – but not prohibited from – traveling in and out of their area. Wales, Scotland, and Northern Ireland have imposed new, stricter rules and enforcement.

Though, there might be no one to reinforce the rules, says event planner Kate Tynan. “People in Manchester will ignore rules anyway and they’ll find ways around the new ban,” says Ms. Tynan. “The checks … how pubs are sticking to guidelines for example, are very varied. No one is checking. There’s room for error everywhere in the U.K.”

For Germany, “the motivation is waning”

In Germany, health authorities once lauded for their rigorous test-and-contact-tracing efforts are pulling back. The virus is surging, and they’re simply short on trained tracers, not to mention buildings to house the army of people needed.

“We have been doing this for about seven months already, and the motivation is waning,” says Mr. Frohnert, the press officer in northern Germany. “Many of our hotline workers are also asking to quit or to transfer to other departments.”

It’s fatigue, explains Mr. Frohnert. Ahead of a long winter, many districts are now asking infected people to trace their own contacts.  Still, aside from a few tens of thousands of conspiracy theorists who have rallied at anti-restrictions protests, most Germans seem to accept the rules.

Annette Brinkman, a Dortmund travel agent who believes the beloved German tradition of Christmas markets should go on – “think of the market vendors!” – has shrugged off spring fears that kept her away from her beloved mother.

“Now I go three times a week, but I always wear my mask and I don’t touch her,” she says. “My mom says, ‘Child, please let me squeeze you, I don’t care if I die of corona.’ But I always tell her ‘No. We have to follow the rules.’”