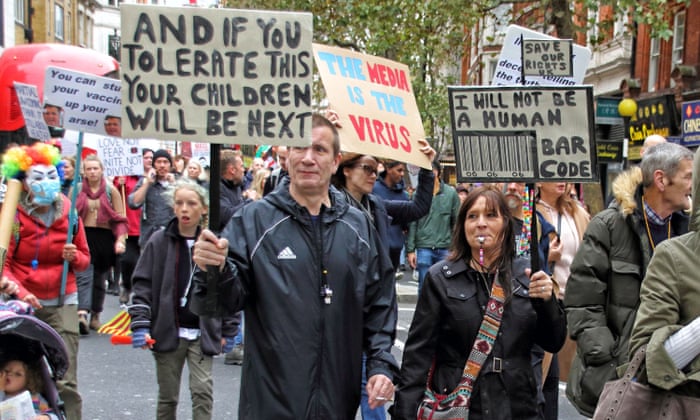 Significant numbers of people around the world believe Covid-19 was created deliberately, has killed far fewer people than reported, or is a hoax and does not actually exist, according to a global survey.

Along with belief in other conspiracy theories – such as that the world is run by a secret cabal – the YouGov-Cambridge Globalism Project, a survey of about 26,000 people in 25 countries designed in collaboration with the Guardian, found widespread and concerning scepticism about vaccine safety.

Among the most widely believed Covid conspiracies is that the death rate of the virus, which according to the Johns Hopkins University tracker has so far killed nearly 1.1 million people worldwide, has been “deliberately and greatly exaggerated”. Nearly 60% of respondents in Nigeria said this was definitely or probably true, along with more than 40% in Greece, South Africa, Poland and Mexico. About 38% of Americans, 36% of Hungarians, 30% of Italians and 28% of Germans felt the same.

There is evidence the coronavirus pandemic has prompted some people to say they trust experts more, but it has also triggered a wave of disinformation and fake news propagated by science deniers and conspiracy theorists that has spread virally on social networks.

“Any scary event – a pandemic, a mass shooting – that denies people a sense of control will lead to a proliferation of conspiracy theories,” said Stephan Lewandowsky, a cognitive psychologist at the University of Bristol who is an expert on misinformation.

“They give people a sense of psychological comfort: the feeling that they are not at the mercy of randomness. They’re dangerous at any time, but more so in a pandemic if they lead people to ignore official advice, or commit acts of vandalism or violence.”

But conspiracy theories also thrived on “governments’ inability to have a clear message”, said Lewandowsky. “They are another reason why we all need clear, consistent, evidence-based policymaking that can be trusted.”

Among other countries, roughly one in four French and one in five British and Spanish respondents believed the death rate of the virus had been exaggerated, while Australians, Swedes and Japanese were more likely to dismiss such a belief.

Significant numbers also thought the virus had been “deliberately created and spread” by the Chinese or US government, while in Poland one in five people believed it was definitely or probably a complete myth, created by unidentified “powerful forces”. Roughly the same proportions in Turkey, Egypt and Saudi Arabia said they agreed with that proposition, while in the US the figure reached 13%.

The false claim that 5G mobile technology is to blame for the spread of Covid-19 also has plenty of adherents, according to the survey, which was conducted in July and August.

More than a fifth of respondents in Turkey, Egypt, Saudi Arabia, Nigeria and South Africa believed it was definitely or probably true that symptoms were “caused or enhanced by the direct, physical effects on the human body” of 5G.

More than half of Nigerians, more than 40% of South Africans, Poles and Turks, more than 35% of Americans, Brazilians and Spaniards and between one in four and one in five French, British, Italian and German respondents believed it was definitely or probably true that Covid-19 had been deliberately created and spread by the Chinese government.

Significant numbers also thought the US government was responsible for creating and spreading the virus: as many as 37% of respondents in Turkey, against one in five in Greece and Spain, 16% in Poland, 12% in France and just 5% in the UK. About 17% of American citizens said they believed it was definitely or probably true that their own government was to blame.

The survey also tested belief levels in common non-Covid conspiracy theories, finding between 20% and 30% support in 10 countries – including South Africa, Brazil, Hungary and Poland – for the belief that manmade global heating was “a hoax invented to deceive”.

Similar proportions thought the moon landings were faked, while between 20% and 30% of respondents in Spain, France, the US, Italy and Germany thought the US government “knowingly helped make the 9/11 terrorist attacks happen”. Between 20% and 44% of people in 17 countries believed or thought it likely that humans had made contact with aliens.

The most widely held conspiracy theory by some distance, however, was that despite who may officially be in charge of national governments and other organisations, there was “a single group of people who secretly control events and rule the world together”.

The survey revealed widespread and significant anti-vaccination sentiment, a matter of serious concern to many governments that hope soon to be able to inoculate their populations against Covid-19.

Across 19 different countries 20% or more of respondents said they gave at least some credibility to the view that “the truth about the harmful effects of vaccines is being deliberately hidden from the public”, including 57% of South Africans, 48% of Turks, 38% of French people, 33% of Americans, 31% of Germans and 26% of Swedes.

While the UK was among the countries with the lowest rates of anti-vaccination sentiment, almost one in five people – 19% – still agreed either wholly or partially with the statement. Research by the Guardian recently found engagement with anti-vaccination content on Facebook had trebled in a month.