Tao Geoghegan Hart’s unexpected victory in the Giro d’Italia on Sunday may well fast-track the 25-year-old to the forefront of the Ineos Grenadiers leadership rotation after the 2019 Tour de France winner, Egan Bernal, revealed he is battling a debilitating spinal condition.

Bernal is now facing months of rehabilitation after being diagnosed with scoliosis. “The problem is that one leg is longer than the other,” Bernal told ESPN Colombia. “It’s a pretty long recovery process, because it has caused me to have scoliosis in my spine.”

Geoghegan Hart’s Giro victory, sealed in the final time trial in Milan, came after the team’s nominated leader, Geraint Thomas, crashed out earlier in the race. With Chris Froome moving to Israel Start-Up Nation and Bernal sidelined, Dave Brailsford will have been relieved by the Londoner’s timely coming of age.

Bernal said he expected his rehabilitation process to take “not one or two months, but a long time”. The 23-year-old abandoned this year’s Tour de France on the second rest day after slipping down the overall rankings, saying he was “screwed up on all sides”.

Geoghegan Hart’s transformation from understudy to Giro champion may have been secured by a matter of seconds, but his fate also turned on a rogue bidon, rolling down a Sicilian street and into the path of Thomas, that sent the Welshman crashing to the tarmac and out of this year’s race. 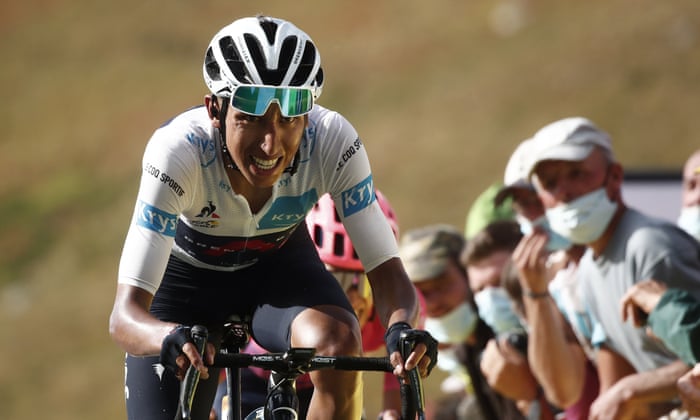 Geoghegan Hart, originally primed for three weeks working for one of his team’s superstars, was quick to take his chance. His win in Milan may have surprised some, but the 25-year-old spent several seasons waiting in the wings to move centre stage.

When the opportunity arrived three weeks ago on the approach to Mount Etna, he was ready.

An also-ran after the Giro’s opening time-trial stage in Sicily – he placed 126th to the stage winner, his teammate Filippo Ganna – his progress through the standings went under the radar until the Giro’s climactic mountain stages when he moved up to fourth, three minutes behind the race leader.

Having shown his climbing pedigree in the Tours of California, the Alps and Switzerland as well as in the Critérium de Dauphiné, squaring up to the monumental ascent of the Stelvio pass, with the outcome of the Giro at stake, proved within his capabilities.

A lifelong Arsenal fan, there was nothing “tippy-tappy” about his powerhouse performance in the Giro’s brutal mountain stages. Aided by resurgent teammate Rohan Dennis, he and his Australian rival Jai Hindley ruthlessly eliminated the opposition until only they were left to battle for the final pink jersey.

To the British cycling community Geoghegan Hart is the hipster’s young pro, learning his trade working in a Clerkenwell bike shop and racing on the east London club scene before graduating to an American apprenticeship under the watchful gaze of Eddy Merckx’s son Axel, at the Hagens Berman Axeon team.

With Froome leaving and Thomas entering his twilight years, Brailsford and the Ineos Grenadiers team owner, Sir Jim Ratcliffe, now need an appealing new British star to front up their team. Adam Yates is joining from the Australian Mitchelton Scott team but it is Geoghegan Hart – humble, assured, and at ease talking about youth and diversity – who will make the most appealing brand talisman.

His Giro experience, meanwhile, has demonstrated that, in a team relying so heavily on leadership rotation in Europe’s three Grand Tours, one teammate’s misfortune is another’s opportunity.

The 2021 Tour de France route will be unveiled on Thursday in Paris and it’s a safe bet that the hipster from Hackney will be watching with interest.