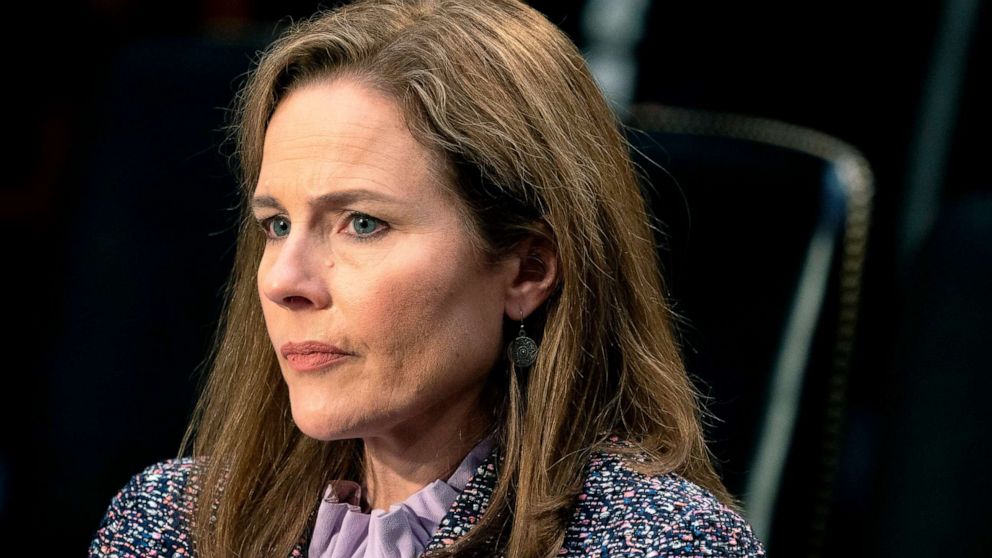 For the first time in U.S. history, the Senate moved a nominee for the nation’s highest court toward certain confirmation just eight days before a presidential election.

Republicans made the move in a rare weekend session without the support of a single Democrat.

“We’ve made an important contribution to the future of this country,” said a beaming Senate Majority Leader Mitch McConnell after winning a key procedural test vote that moved (Judge Amy Coney) Barrett closer to confirmation to the Supreme Court, a key goal of President Donald Trump who has voiced concern that the outcome of the hard-fought election might be settled by the high court.

“A lot of what we’ve done over the last four years will be undone sooner or later by the national election. They won’t be able to do much about this for a long time to come,” said McConnell.

“Confirming a lifetime appointment this late into a presidential election season is outrageous,” Senate Democratic Leader Chuck Schumer fired back. “There is no escaping this glaring hypocrisy. … No tit for tat, convoluted, distorted version of history will wipe away the stain that will exist forever with this Republican majority and with this Republican leader. No escaping the hypocrisy. But oh, my, how the Republican leader has almost desperately tried.”

On Sunday, senators voted along party lines to quash a Democratic filibuster of Barrett to replace the late liberal icon, Justice Ruth Bader Ginsburg. And that tally, 51-48, is expected to be similar to Monday evening’s final confirmation vote, though one Republican will add her name to the “aye” column, Alaska’s Sen. Lisa Murkowski.

The senator opposed moving a nominee so close to the election, saying “fair is fair” given that her own party had blockaded President Barack Obama’s pick in 2016 to replace the late Justice Antonin Scalia eight months before the election, but with Republicans securing the necessary votes for confirmation, Murkowski changed course.

“While I oppose the process that has led us to this point,” Murkowski said in a Saturday floor speech. “I do not hold it against her as an individual who has navigated the gauntlet with grace, skill and humility.”

That move left one Republican — Sen. Susan Collins of Maine — alone among the GOP opposition expected to vote against Barrett on Monday. Collins is in an extremely difficult fight for reelection in a moderate state where she has been lambasted for her past support of conservative jurists, including Trump’s highly contentious nominee, Justice Brett Kavanaugh.

As Democrats and outside activists decried what they said was GOP hypocrisy in shifting positions from 2016 to now, Republicans repeatedly sought to defend their apparent turnabout in position throughout the abbreviated nomination fight.

“We followed precedent in 2016, and we’re following precedent this week,” McConnell said.

Republicans have cited the 19 times between 1796 and 1968 during which presidents went on to fill a Supreme Court vacancy in a presidential-election year while their party controlled the Senate.

But Schumer on Sunday accused Republicans of mounting “a long and tortured defense of this cynical power grab,” of making up “ex post facto” excuses, noting that in 2016 Judiciary Committee Chairman Lindsey Graham said, “I want you to use my words against me. If there’s a Republican president in 2016 and a vacancy occurs in the last year of the first term, you can say Lindsey Graham said, ‘Let’s let the next president, whoever it might be, make that nomination.'”

“Notwithstanding all the bluster you just heard because of a long, systematic strategy by the Democratic leader to block judges put forward by Republican presidents,” Sen. John Thune, R-S.D., shot back, “Tomorrow we are going to get to vote to confirm one of the most outstanding judicial nominees that I’ve had the pleasure of considering during my time in the Senate. Judge Amy Coney Barrett is eminently qualified … first in her class at Notre Dame Law School, Supreme Court clerk, beloved Notre Dame law professor, outstanding scholar, circuit court judge.”

Lacking the procedural tools and sheer numbers to stop the nomination, Democrats chose, instead, to almost-singularly focus — in rare unified fashion — on the threat they said a Justice Barrett would pose to Americans’ health care. Just one week after Election Day, the justices are scheduled to hear oral arguments in a case brought by 18 conservative state attorneys general, with the support of the Trump Administration, challenging the validity of the Affordable Care Act and its guaranteed coverage for those with preexisting conditions.

During Barrett’s confirmation hearings, Judiciary Committee Democrats displayed poster-size pictures of Americans that they said would be crushed if Barrett were — as they described — to cast the deciding vote in that case. In boycotting the committee vote on the nomination, Democrats placed those same posters in their empty seats.

Sen. Dick Durbin, D-Ill., on Sunday called on Barrett — who he said gets to select the day she takes her oath of office — to choose to be sworn in after that Nov. 11 case is heard by the court, saying that might go a long way to quell concerns.

“Let me be perfectly clear, if Judge Barrett is confirmed, Americans could well lose the significant benefits that the ACA provides. More than 130 million Americans have preexisting conditions like cancer, asthma, or even COVID-19, and they could then be denied coverage,” the California senator said in a floor speech, adding, “It is my belief that Judge Barrett represents a threat to the very rights, including reproductive rights, rights of LGBT individuals, and voting rights that Justice Ginsburg worked so hard to protect, and for those reasons, I oppose her nomination and urge my colleagues to do that same.”

Feinstein also lambasted the nominee as “evasive” and said Barrett dodged some 100 questions during her confirmation hearings.

Liberal groups had clamored for more of a protest from Democrats for weeks, pushing lawmakers to boycott the hearings altogether.

But Feinstein, last week, defended Democrats’ decision to appear at the proceedings which they then used, instead, to paint Barrett as a threat to abortion access, voting rights, health care, civil liberties and even democracy itself.

“Last week Democrats participated in the nomination hearings because we wanted to show what was at stake for America,” said Feinstein.

The 87-year-old Democrat has come under fire from liberal groups after she praised Graham for running “one of the best hearings I’ve participated in” and hugged the South Carolina Republican, a chief target of those on the left.

The outrage prompted Schumer to tell reporters that he had had a “long, serious talk” with Feinstein, implying that her position on the panel, particularly if Democrats take the Senate after Election Day, might be in jeopardy.

Graham called the response to Feinstein a “shame.”

“It’s not enough to agree with the cause you’ve got to hate the people they want you hate,” Graham said.

During her hearing, Barrett dodged repeated attempts by Democrats to get her to commit to recusing herself from election-related matters.

“Your participation — let me be very blunt — in any case involving Donald Trump’s election would immediately do explosive, enduring harm to the court’s legitimacy and to your own credibility,” Sen. Richard Blumenthal, D-Conn., said to Barrett during her hearings. “You must recuse yourself.”

Barrett said she would “consider it” but pushed back on the insinuation that she might rule favorably for the president merely because he nominated her.

“I certainly hope that all members of the committee have more confidence in my integrity than to think that I would allow myself to be used as a pawn to decide this election for the American people,” Barrett said.

Issues related to the election were front and center for Democrats who fear Trump is looking to secure a justice favorable to him on the court before Nov. 3. They pressed Barrett on simpler questions, like whether the president could unilaterally delay the date of the election — something that, by law, only Congress can do — and whether the president should commit to leave office peacefully, something Trump has appeared to question.

But the judge dodged.

As she did throughout her three days before the committee, the 48-year old judge said that she could not weigh in on matters that might come before the court. She said she was merely following the “Ginsburg rule,” providing “no hints, no previews, no forecasts,” as the late justice had famously done at her own confirmation hearings in the 1990’s.

Barrett also made waves when she said she did not believe that Roe v. Wade, the landmark abortion rights case, was not a so-called “super precedent,” something so established that it would likely never be overturned.

But the judge — over and over — demurred, alarming abortion rights groups.

Republicans used the hearings to champion Barrett, a devout Catholic and mother of seven, as a trailblazer for conservative women and a well-qualified nominee, and repeatedly sought to draw Democrats into a fight about her faith. But Democrats refused.

“To my friends across the aisle, I would say that the American people are no more afraid of the ideas of a Catholic woman than they are of the words splattered on a protest poster being held by a liberal woman,” Sen. Marsha Blackburn, D-Tenn., said.

Republicans looked to dispel concerns about the impact that Barrett’s Catholic faith might have on her ability to rule impartially.

“Can you set aside whatever Catholic beliefs you have regarding any issue before you?” Graham asked.

“I have done that in my time on the 7th Circuit. If I stay there I’ll continue to do that,” Barrett said. “If I’m confirmed to the Supreme Court, I will do that still.”