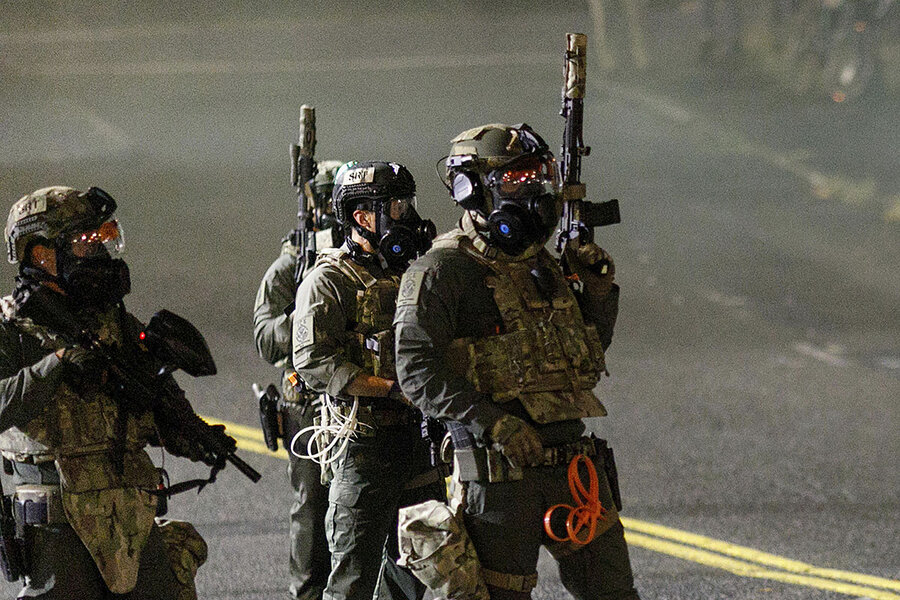 On a September morning in 2008, Brian Wood made a distraught retreat from a heated dispute with his wife and sat down with a gun in his truck in the driveway of his suburban Salt Lake City home. The part-time firefighter was having a mental health crisis, and he fired two warning shots when police arrived at the beginning of a 12-hour standoff.

Wood’s father-in-law, William “Dub” Lawrence – a former local sheriff who founded the Davis County Sheriff Department’s SWAT team in 1975 – stood behind the official cordon and watched the standoff escalate with horror and regret. More than 100 law enforcement officers, including 46 SWAT members swarmed to the scene, armed and clothed in fatigues like combat soldiers, militarizing a mental health problem.

Wood eventually was forced from his truck by tear gas and pepper spray, hit with rubber bullets and pepper balls, tasered, and then fatally shot.

The escalation of that situation, says Mr. Lawrence who now advocates against the militarization of police, is evidence of a paramilitary mindset pervading American policing.“As a nation we’ve become more tolerant and acceptable of killing people,” says Mr. Lawrence. “To us it would have been a complete failure if either an officer or a civilian got hurt in a standoff situation.”

That paramilitary mindset has grown in recent decades to define much of American policing.

But Breonna Taylor’s killing earlier this year by Louisville, Kentucky, police officers during a botched drug raid has triggered powerful momentum for change. The incident broadened and amplified a belief among lawmakers and policy advocates – across the ideological spectrum – that militarized policing bends, if not breaks, constitutional norms and needs to be reined in.

The Constitution “is very intentional about the use of the military and the types of controls on it that need to exist,” says Sarah Turberville, director of the Constitution Project at the Project on Government Oversight. “Militarization of local police really begins to bend that.”

“We’ve seen broader support than any other year” from the public and politicians to change that, she adds.

Military equipment and tactics can be used appropriately, such as responding to active shooter and hostage situations, but they have increasingly been wielded in more proactive circumstances like drug raids and mental health crises, endangering rather than supporting the law enforcement mission of ensuring public safety and basic rights. Civilians killed and severely injured include a paraplegic woman in her 80s and a 19-month-old baby.

Breonna Taylor, an emergency room technician in her mid 20s, was asleep when police, executing a late-night search warrant related to a drug investigation of a former boyfriend, broke through her front door last March. At least 20 shots were exchanged between the three officers and Kenneth Walker, Ms. Taylor’s boyfriend at the time, including five shots that killed her.

The three officers involved were not part of a SWAT team, but their late-night “dynamic entry” raid was the same aggressive, special-forces-inspired tactic SWAT units have been using with increasing frequency around the nation since the war on drugs began in the 1970s.

There were about 3,000 SWAT deployments per year in the early 1980s, and 30,000 per year by the 1990s, according to Peter Kraska, a professor at Eastern Kentucky University and an expert in police militarization. And now there are about 60,000 deployments per year – an increase, he says, due to “a paradigm shift,” not because there are more situations requiring a SWAT response.

“The bulk of their responsibilities [became] going out into the community and doing forced entries, dynamic entries into people’s houses,” often to execute drug-related search warrants, he adds.

Maryland tracked such data from 2011 to 2014, learning that there were about 4.5 SWAT raids per day in the state, the majority for what the FBI classifies as “misdemeanors and non-serious felonies.”

The Clinton administration’s 1033 Program expanded domestic law enforcement access to cheap or no-cost surplus U.S. Department of Defense equipment ranging from sleeping bags and canteens to grenade launchers, bayonets, and weaponized drones. Over $7.4 billion worth of property has been transferred to law enforcement since the program began, according to the Pentagon’s Law Enforcement Support Office.

The equipment, says former St. Louis Metropolitan Police Sgt. Heather Taylor, is like “toys” in a “male-dominated” police culture. “That’s how they‘re thinking, and that’s part of the problem,” she adds.

The 1033 Program is where reform seems to be gaining traction. In a 90-10 vote in July, the U.S. Senate approved some restrictions on the program, such as barring the transfer of weaponized drones and combat vehicles and requiring departments that receive equipment to also get de-escalation training.

But restricting – even eliminating – the 1033 Program “would not rein in police militarization one iota,” says Dr. Kraska.

Militarization goes beyond just weaponry, he and others argue, to the use of military battle dress, military training, and a culture of aggression and fear of the communities police serve.

In one survey in the 1990s, Dr. Kraska found that 43% of SWAT teams reported receiving training from active duty military special operations personnel. That “had a dramatic influence on police culture,” he says

“It puts the police in a highly aggressive posture and mindset towards the people they’re serving,” he adds. “It runs against everything that we stand for in a democratic society.”

“SWAT is necessary in some circumstances, with extreme levels of violence,” says Ms. Taylor, the recently retired St. Louis homicide sergeant, who is now spokesperson for the Ethical Society of Police, a local police union.

She remembers vividly the night she had to call SWAT a few years ago when a man shot and killed someone in a car, then took other people in the car hostage and drove them to a house.

“I knew this guy was heavily armed. And I didn’t want anyone to go in there, but we had to get someone into this house,” she recalls.

“But Breonna Taylor’s case,” Ms. Taylor says, “a [no-knock] search warrant for drugs and packages? It was not necessary.”

And the consequences of violent militarized policing go beyond the direct physical injuries and deaths from these encounters.

Even low-level contacts with law enforcement that don’t result in arrests or citations can increase trauma and anxiety, a 2014 survey of people searched under New York City’s controversial “stop-and-frisk” policy found.

“Police violence is associated with mental health concerns that goes beyond the individual. [It] is experienced at the community level,” says Denise Herd, an associate professor of behavioral sciences at the University of California, Berkeley, who is researching the public health effects of the criminal justice system.

In Texas, Charley Wilkison – executive director of the Combined Law Enforcement Association of Texas, a statewide law enforcement union – says that officers “are going to have to be prepared to see a lot of changes, because the public is going to want to see law enforcement doing things differently.”

But, he adds, “the answers nationally are going to come from the people who do the hard work to get past the rhetoric and into the operations.” Those answers, he says, are “going to have to come from the elected officials.”

Data on things like the number and purpose of SWAT deployments would be helpful in framing the debate, says Mr. Wilkison. A Maryland law requiring such data to be reported revealed the 4.5 SWAT raids per day in the state statistic. Utah passed a similar law in 2014.

“Nobody should be above the law,” he says, including police.