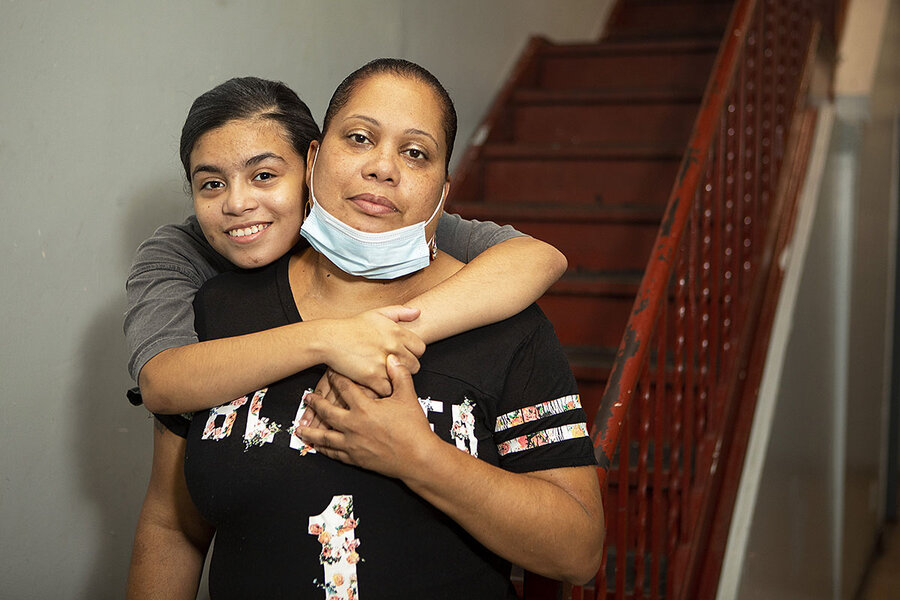 Rosa Febo and her daughter, Melanie Bergos, are used to traveling for school. After they moved into a Queens homeless shelter in 2018, it would take 90 minutes to get to Melanie’s school in Harlem – two buses and two trains. They’d wake at 5:30 a.m. and get home about 9 at night, shortly before curfew. They eventually got a studio apartment in Harlem, only 20 minutes to school. Unlike at the shelter, this apartment had a table where Melanie could do homework.

But then March hit, and Melanie’s school closed along with almost 2,000 other public schools in New York City, the largest school district in the United States. Now the 2020-21 school year is in session, and parents, teachers, and students are concerned.

Currently in seventh grade, Melanie is joining almost half of public school students who are logging on for school every day rather than attending in person. Or at least she’s trying to log on. Links often don’t connect, and city-issued iPads don’t easily mesh with school programs. Some days Melanie has just two hours of school instruction – sometimes live, sometimes by recorded video. “She gets frustrated. Everything is so messed up,” says Ms. Febo. “What can you possibly learn in two hours?”

New York City schools are among a growing number of the nation’s largest districts to resume, or attempt to resume, at least some in-person learning, with classes once or more a week for its approximately 1.1 million pupils. Part of the reason the city is forging ahead: its 114,000 homeless students. That’s more people than the population of Green Bay, Wisconsin. For these students, school provides consistency, structure, social services, food, socialization, continuity of care, relationship building, and security.

“COVID further exposed a fragile safety net and the inability for the system to provide comprehensive services and care to the most vulnerable,” says Eric Weingartner, CEO of the Broome Street Academy, a charter high school where many students are homeless or have vulnerable housing situations. “COVID made access harder, eliminated access to many services, and further fractured a decentralized system.”

About 13,500 school-age children sleep in shelters each night, according to the city’s Department of Homeless Services. The rest crowd in with friends or relatives, like Ms. Febo and Melanie first had done.

Of those families in shelters, about one-third have a parent who works. While getting parents back to work is a big reason the city is proceeding with in-person classes, the city’s schooling options are putting many of those parents in a bind. Basically, city parents have two options: Have their children go 100% remote and take Zoom classes or other video instruction at home, like Melanie. Or the children can go to the school building from one to three days per week (depending on the school) and learn online the rest of the time. Under the best of circumstances, just about every New York City schoolchild will be online for class at least twice a week.

Though the city has distributed 345,000 internet-enabled iPads since March and schools another 500,000 Wi-Fi enabled laptops or tablets, many shelters have dead zones that render them useless. For children living doubled or tripled up with family or friends, Wi-Fi networks are quickly overburdened when several children are online simultaneously. Even when devices can connect, there are problems.

Melanie has two iPads from the city, but they don’t work well with her school’s system. So she works on her brother’s laptop and gets the internet via cable. Ms. Febo owes the cable company $400 and worries about how Melanie will go online if her service is cut. Cell reception in her apartment is so poor, Ms. Febo takes phone calls in the hall outside.

The nonprofit Win runs 11 family shelters across New York City, more than any other private group. It has provided iPads, laptops, and hot spots to children. The group also has hired in-house tech support to help children with city-issued devices that don’t work as they should.

“It’s past time for the city to step up and provide homeless students, at a minimum, with reliable IT support … social workers, paraprofessionals, and functioning technology,” says Christine Quinn, president and CEO of Win. “At Win, we’ve been working tirelessly to ensure that our students can succeed as long as schools remain closed. … We shouldn’t have to do this alone.”

Observers note that the city’s Department of Education is trying: providing grab-and-go meals around New York for children whose primary meal is at school, allowing schools to tweak their models based on student needs, employing support staff in shelters and schools, loaning devices, and assigning a dedicated technology person at each school.

Typical shelter policies forbid children from being on-site without the parent, so the city also is funding Learning Bridges, a child care program where pre-K through eighth grade children in the hybrid model (some in-person learning, some remote) can go when they’re not in school. There are about 30,000 Learning Bridges seats now, with 100,000 spots planned by December. Homeless children have priority, but so do other groups.

Given the rule that no one under age 18 can be in a shelter without parental supervision, advocates are calling for policy changes or an off-site program for high schoolers. The Department of Homeless Services says decisions regarding unaccompanied high schoolers studying solo in shelters will be assessed on a case-by-case basis.

Though the best way to help homeless students is to find them homes, advocates say less expensive remedies could help in the meantime, such as extra bilingual support for parents, a dedicated IT person at each shelter, and common space where students can work. Extra social and emotional support for these students, given their lack of stable homes, has also been called for.

Additional educational support could help narrow the gap as well, says Robert Mascali, former deputy commissioner of the Department of Homeless Services and former vice president of supportive housing at Win. He suggests the Department of Education bring in City University of New York tutors, many of whom come from low-income families and could become role models.

“People have been pushing these programs for years. [They’re] going to pay dividends. This is the future homeless population if we don’t get the [children] educated now,” Mr. Mascali says. While he agrees that such programs will be expensive in a time of tight budgets and will require a change in procedure, “if it takes three, six, nine months, or a year, every journey starts with one step.”

With so many students and a situation so exceptional, face-to-face reopening was bound to be difficult. In September, for example, the city delayed school openings. Unknowns and last-minute changes are hard for everyone, but they’re incredibly hard on homeless families, says Jacquelyn Simone, policy analyst at the Coalition for the Homeless.

“Not everyone comes up in ‘ideal circumstances,’” says Bronx middle school teacher Rosanna Perch, in a text message. “Some kids have issues, and none of these are their fault. I am not going to blame their families, either. Each child that I teach is a valuable part of our community; each one of them has so much promise.”