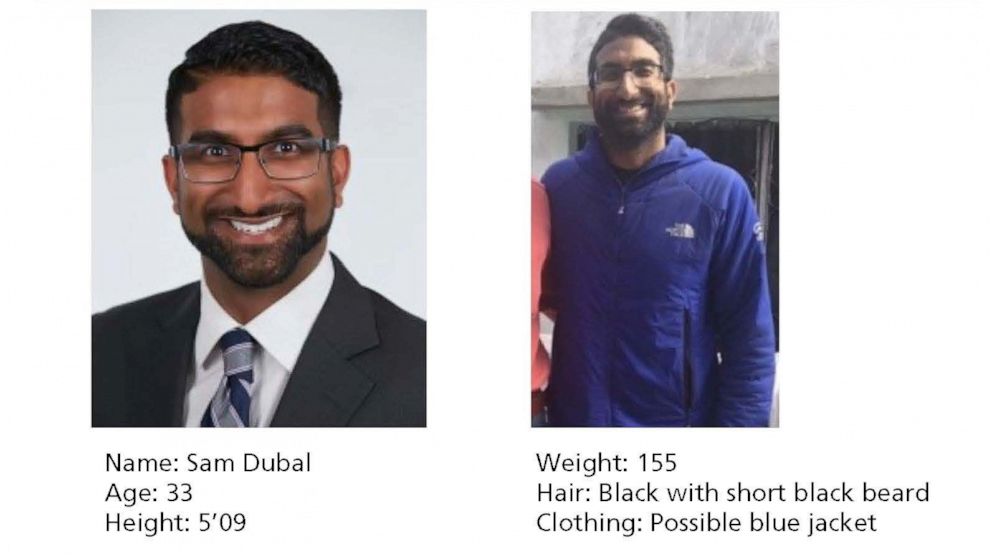 The search for a University of Washington anthropology professor who went missing while hiking in Mt. Rainier National Park has resumed after a snowstorm in the area halted efforts to locate and rescue him, officials said.

Sam Dubal, 33, was reported missing on Oct. 11 when he failed to return home from the hiking trip, according to the National Parks Service.

The search resumed on Sunday after officials had scaled back rescue efforts on Friday due to a storm that blanketed the wilderness area in snow and because rescuers had turned up no signs to narrow down the professor’s whereabouts.

“Searchers have spent long hours scouring the area and not locating Dr. Dubal is heavy on our hearts,” Chip Jenkins, the park’s superintendent, said in a statement. “We continue to be in close contact with Dr. Dubal’s family and will keep them updated as new information becomes available.”

Dubal started his hike on Oct. 9 and was last spotted that day hiking on the park’s Mother Mountain Loop trail near Mowich Lake, officials said.

He was expected to return home on Oct. 10. His family reported him missing the following day.

When the search was suspended last week, Dubal’s friends and family started a petition on Change.org in hopes of getting the National Parks Service to keep aggressively searching for Dubal for another 72 hours. The petition was signed by more than 46,000 people.

“We cannot bear the thought of an abandoned search during this narrowing period of survivability,” Dubal’s sister, Dena Dubal, said in a Twitter post on Friday.

Dubal was described in the Change.org petition as being very fit and “a skilled hiker with tremendous experience including in the Himalayas.”

Dubal, according to family members, had taken overnight gear on the trip, including a tent, sleeping bag, rain and snow gear as well as a cellphone and a charger.

“There is a very high chance that Sam is alive. He is still in a window of survivability, even with hunger and hypothermia, which many medical experts estimate between 2–3 weeks with the type of gear he was carrying,” the petition reads.

The petition noted that experienced hiker Holly Coutier, a 38-year-old mother from California, was found alive last week in Utah’s Zion National Park after she went missing for 12 days. Family members told ABC News that Coutier became disoriented after injuring her head on a tree while she exploring the park.

The National Parks Service said Dubal is the fourth hiker to be reported missing in Mt. Rainier National Park since June.

Vincent Djie, 25, an Indonesian student living in Seattle, was reported missing on June 19 after he failed to return home from a hiking trip to the park. A search has failed to turn up any sign of Djie, officials said.

On Aug. 4, rescuers found the body of 27-year-old Talal Sabbagh, who had been reported missing on June 22. Sabbagh’s body was found off a trail in the park’s Paradise area near the south slope of Mt. Rainier, officials said.

On June 29, the body of Matthew Bunker, 28, was discovered in the park after he was reported missing by his climbing partner on June 19, officials said. The climbing partner told officials he became separated from Bunker as they descended the snow-covered 10,400-foot Thumb Rock on the north flank of Mt. Rainier.

Homeless and trying to learn in a pandemic: What some students face

Extreme fire danger in California, record cold and snow from Texas to Montana

Pressure builds for US police to change military mindset