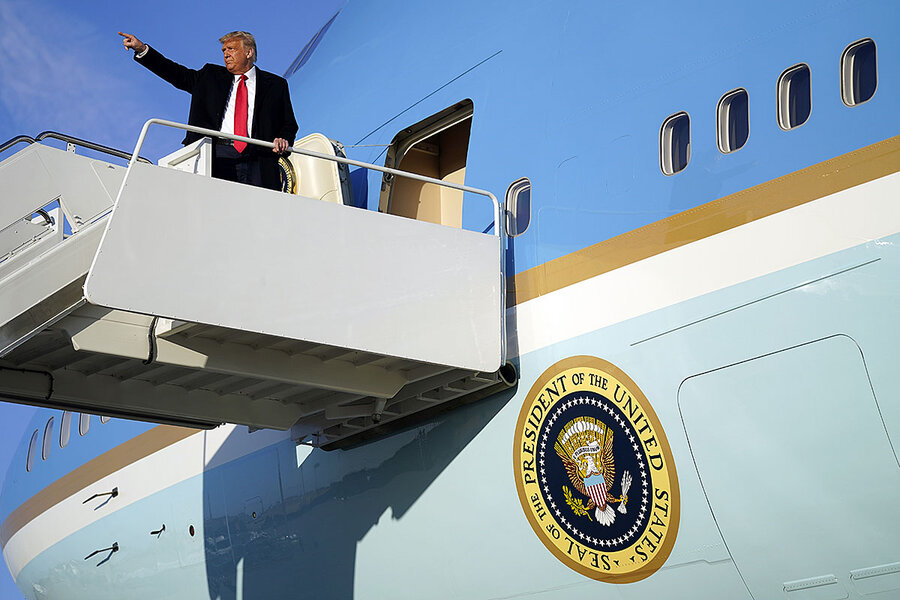 Debate over, the motorcade sped back to Nashville International Airport and discharged the most powerful man in the world.

“Mr. President, Mr. President!” reporters called out, as he and the first lady strode past us from a distance, on their way to Air Force One. President Donald Trump stopped, looked toward the press pool gathered under the wing, and pointed toward the back of the plane.

We knew what that meant: President Trump was probably going to come back, mid-flight, and talk to us – the small group of reporters traveling with him in the plane’s aft cabin – on the way back to Washington.

And indeed he did. The nearly half-hour visit was mostly off the record, which means I can’t report what he said, except for the on-the-record portion – about his intention to vote in person in Florida last Saturday (which he did). But as I wrote in my “pool report” to the larger press corps, the president was “chatty, even ebullient” during our time with him late last Thursday night.

Mr. Trump’s post-debate tweets explained the happy mood. One, from the conservative site The Blaze, had him winning the debate 96% to 4%. Another thanked former Fox News commentator Megyn Kelly for saying “Trump won this debate, handily.”

Remember, Mr. Trump had attacked Ms. Kelly for her performance as a debate moderator in 2015, leading to outrage by some conservatives. But that was so five years ago.

Now, eight days until Election Day, the end of one weird presidential campaign is in sight. Vice President Mike Pence’s office is now the epicenter of a new wave of COVID-19 diagnoses at the White House, yet the vice president is still holding rallies, “in consultation with the White House Medical Unit,” his spokesman says.

In addition, the White House is planning a ceremony this evening to swear in Judge Amy Coney Barrett to the Supreme Court, following her expected confirmation. The event will recall her Rose Garden introduction last month as the nominee, after which several participants were diagnosed with the coronavirus – including the president himself.

Mr. Trump is continuing to campaign around the country at a break-neck pace, while Democratic nominee Joe Biden – leading in the polls – plays it more cautiously.

Former President Barack Obama, breaking precedent with past ex-presidents who typically lie low in campaigns, has hit the trail on behalf of his former vice president. But instead of recalling the large, adoring crowds he used to summon when he ran for himself, he’s presiding over “car rallies,” with honks replacing cheers.

And despite rising virus case loads across the country, the White House continues to mock the former vice president for wearing a mask.

“The only person waving a white flag [on the virus] along with his white mask is Joe Biden,” White House chief of staff Mark Meadows told reporters Monday.

At least Mr. Meadows isn’t press shy, as some chiefs of staff can be. Last Thursday, on Air Force One, he came back to the press cabin for a quick hello – wearing a mask, we were pleased to see. After we landed in Nashville, a maskless Mr. Meadows sought out the pool to tell us that Mr. Trump had tested negative for COVID-19 during the flight, a welcome bit of news. Mr. Trump has yet to say if he was tested for the virus the day of the first debate, Sept. 29.

The oddest moment of all last Thursday came while the press pool was cooling its heels in a hotel conference room, while Mr. Trump was meeting with supporters.

Word came that Trump campaign adviser Jason Miller was going to bring one of the president’s debate guests to talk to the pool. It was Tony Bobulinski, a former business partner of Mr. Biden’s son Hunter. He had emerged as a figure in the ongoing saga of Hunter Biden’s supposedly abandoned laptop, and the effort by the Trump campaign to portray the Biden family – including the former vice president himself – as corrupt.

At the appointed hour, Mr. Bobulinski entered the room, placed three cell phones on a chair in front of him, and read from a prepared statement. His core allegation was that Joe Biden was lying about his knowledge of his son’s business venture in China, and he had evidence to prove it (contained in the phones). But Mr. Bobulinski would not take questions, saying he was about to present his evidence to the FBI and to key senators.

Joe Biden has denied any involvement in his son’s business and has released two decades of tax returns with detailed financial information. And the mainstream media have been leery of the story, questioning the authenticity of the evidence.

In the waning days of this weirdest of campaigns, it may not matter. The dominant story is the pandemic and its economic impact.

In one man’s quiet fight, a window on eviction’s toll