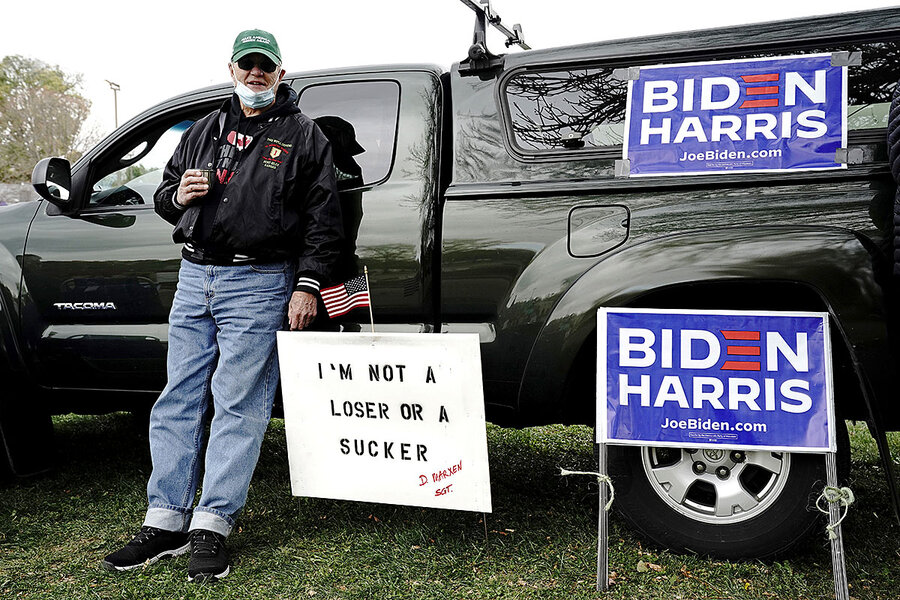 Bryce Dubee traces his drift toward the Democratic Party to his first Army tour in Iraq in 2004. A year earlier, only weeks after U.S. forces invaded, then-President George W. Bush gave his “mission accomplished” speech. Mr. Dubee realized soon after arriving that the upbeat rhetoric of military and political leaders back home downplayed the reality on the ground.

“It was already grim when we got there,” says Mr. Dubee, who had supported Mr. Bush as the Republican nominee for president in 2000. “And as things went along, I remember thinking, ‘Maybe this is bad.’”

A public affairs officer, he deployed twice to Iraq and once to Afghanistan during a 12-year Army career that ended in 2016, and by then, he had switched political parties. As early voting began two weeks ago in Texas, where he lives in an Austin suburb, the former staff sergeant cast his ballot for Joe Biden. Mr. Dubee favors the Democratic candidate over President Donald Trump, who he asserts has exploited the military at home and damaged its reputation abroad as commander in chief.

“This administration has used the military as a prop for patriotism and ignored our foreign partners,” he says. A Biden presidency “would bring back some of the normalcy and stability that’s been missing the past few years.”

His vote appears remarkable only in the context of a popular assumption – one as outdated as it is enduring – that troops and veterans represent a monolith of white conservatives.

The aggressive efforts of the Biden and Trump campaigns to win over current and former service members suggest a deeper awareness of their political diversity. Recent polls show the race for the military vote tightening, and in Arizona, Florida, and other swing states with large military and veteran populations, capturing that support could prove crucial to each candidate’s national fortunes.

Service members and veterans lean Republican overall, explains Jeremy Teigen, a political science professor at Ramapo College of New Jersey who studies military and veteran voting patterns. “But it’s wrong to see them as a single voting bloc,” he says. “There are more nuances to their voting preferences than we tend to think. They’re not all alike.”

Some 20 million veterans live in the United States, making up about 6% of the country’s population, and the military’s 1.3 million active-duty personnel account for less than 1%. As a result, most Americans have sporadic contact with current or former service members in everyday life, creating a civilian-military divide rife with misperceptions.

The chance to educate civilians about the varied politics of military households motivates Carla Thornton as a member of the Moreno Valley City Council in Southern California. The 20-year Air Force veteran, who retired with the rank of master sergeant in 2017, faces a different sort of implicit bias as a registered Republican and Trump voter in one of the country’s bluest states.

“I’m a native Californian, a Black woman, a single parent, a social worker, and a professor at a university,” she says. “So I’m put in a box as a liberal and a Democrat.” Ms. Thornton, an assistant professor of social work at California Baptist University in Riverside, won election to the council two years ago. She views the support that the military and veterans receive across party lines as an opening for her to forge bipartisan alliances at a time of extreme polarization.

“I’ve had Republicans call me a Black unicorn,” she says, laughing. “I see my role as one of trying to mend some of our political divisions, and I think that, as a veteran, people on the left are a little more willing to hear me out than they would be otherwise.”

Former service members account for an estimated 13% of the voting population, and almost 60% identify as Republican, a conservative tilt that has persisted since the 1980s. Yet the dominant image of veterans as aging white men from the World War II and Vietnam eras has started to fade, eclipsed by a younger cohort with more women and minorities.

The growing numbers of female troops and veterans could reshape the military vote in coming years. In the 2018 midterm elections, polls showed that 60% of military women favored Democrats, aiding the party’s mission to reclaim Congress.

The Democratic race for president further magnified the generational shift with the campaigns of Pete Buttigieg, the former mayor of South Bend, Indiana, and U.S. Rep. Tulsi Gabbard of Hawaii. The presence in the field of two candidates under age 40 who served in Afghanistan and Iraq – coupled with his status as a married gay man and her Hindu faith – defied military and veteran stereotypes.

“Perceptions are slowly evolving,” says Seth Lynn, executive director of Veterans Campaign, a nonprofit group that prepares former service members to run for office. He mentions the national profiles of two Republicans in Congress, Sen. Tom Cotton of Arkansas and Rep. Dan Crenshaw of Texas, who both fought in America’s 21st-century wars. “There’s an uptick in public awareness about younger veterans getting involved in the political process.”

Nearly two-thirds of the 181 veterans running for office this year – 121 Republicans, 60 Democrats – served after 2000. For Alec Gillis, who deployed to Iraq and Afghanistan as an Army intelligence analyst, the candidacies of post-9/11 veterans signal his military generation’s electoral potential.

“We have an opportunity to use our voice,” says Mr. Gillis, a New York native who lives in the Bronx and plans to vote for Mr. Biden. “We’re going to be heard at the polls.”

Military leaders seek to avert partisanship in the ranks by preaching that troops “bleed green.” During his 13 years in the Army, Mr. Gillis recalls, he sensed little political tension while serving under former Presidents Bush and Barack Obama, his Democratic successor.

“I was around plenty of conservatives,” says Mr. Gillis, who finished his military career as a staff sergeant in 2016. “Nobody really made a big deal about politics.”

The mood has changed under Mr. Trump, whose polarizing effect has frayed the bond of service that unites troops and veterans. Reports of more political rancor in the armed forces mirror accounts of greater animosity among veterans who served together.

The president has clashed with top military officials and feuded with families of soldiers killed in action. This summer he deployed federal troops against peaceful demonstrators blocks from the White House and sent tactical teams to other cities to quell racial justice protests. Mr. Trump denied a recent report that he has referred to America’s war dead as “losers” and “suckers,” and he drew criticism earlier this month after suggesting that he contracted the COVID-19 virus while meeting with Gold Star families.

Mr. Gillis, who is Black, severed contact with some members of his old Army unit after they praised the president on social media for condemning the Black Lives Matter movement. “These are people I went to war with, brothers and sisters in arms,” he says. “We trusted each other with our lives, and now that’s gone.”

The domestic upheaval during Mr. Trump’s term and his strained relations with the country’s longtime foreign allies have elicited bipartisan censure from 780 national security officials, who signed an open letter endorsing Mr. Biden for president. The list includes dozens of retired generals and admirals, more than 100 former ambassadors, and five former Defense secretaries.

The fraught political climate could enable Mr. Biden to siphon military support from Mr. Trump, who won the veteran vote by almost two to one over Democratic candidate Hillary Clinton in 2016 – a margin largely delivered by older white men, his core constituency. In campaign speeches, the former vice president talks about the military service of his late son, Beau Biden, who deployed to Iraq with the Army National Guard and died from brain cancer in 2015.

“That’s something that can resonate with military voters,” says Mr. Teigen, the author of “Why Veterans Run: Military Service in American Presidential Elections, 1789-2016.” “It’s shorthand for patriotism, for country before self, for a willingness to sacrifice.”

The message has failed to move Jason Hair, who deployed to Iraq with the Marine Reserves in 2005. He voted for Mr. Trump in 2016 – a choice he describes as “more anti-Hillary than pro-Trump” – and backs him again this year.

Mr. Hair, who lives in the Northern California city of Oroville, credits the president for bringing home thousands of U.S. troops from Afghanistan, Iraq, and Syria, and for prodding NATO member countries to boost defense spending.

“I do think America has been the world’s 911 for too long,” says Mr. Hair, who lost his home two years ago when the deadliest wildfire in state history destroyed the nearby town of Paradise. “We’ve been doing more than we should. It’s time for other countries to step up.”

Mr. Hair wishes Mr. Trump would refrain from tweeting at all hours. But he disregards the alleged “losers” and “suckers” comments, pointing out that the story relied on anonymous sources, and he contends that America needs four more years of the president’s particular brand of candor.

“A lot of what Trump has done is very refreshing,” he says. “He’s the first major political figure who doesn’t care what he says or how he says it. That’s not what you get with Joe Biden.”