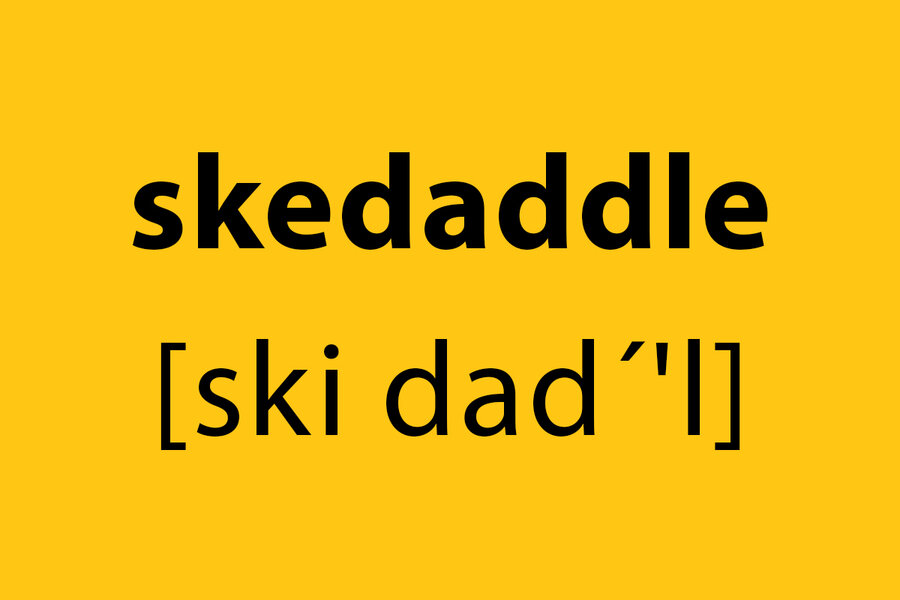 War is a crucible for the creation of slang. People from different regions are thrown together under intense circumstances, and “this mixing of people from diverse backgrounds spurs linguistic innovation,” according to rhetoric expert William FitzGerald. Lately, I’ve been thinking about the slang that developed during the most polarized period in American history: the Civil War.

Some of the words and idioms are still common in English, while others have gone AWOL (“absent without leave” or, more broadly, “missing” – first used circa 1863). Shebang is perhaps the most familiar today. During the war, it referred to “a crude shelter, a shanty,” but by 1869 it was commonly paired with whole and used to mean “thing, business,” as in “I’m tired of the whole shebang.”

Dictionaries won’t even hazard a guess about where shebang came from – Merriam-Webster notes simply “origin unknown.” But speculation is rampant about skedaddle. This word means “to run away, flee, make a hasty retreat,” and letters from both sides of the war are full of it: Union soldiers reported that “the rebs skedaddled,” while Confederates wrote home about how “the yanks skedaddle.” By 1867, the word was popular even in England – a character in one of Anthony Trollope’s novels describes how her friend’s suitor has left in a hurry: “Mamma, Major Grantly has – skedaddled.” (Her mother replies, “Oh, Lily, what a word!”)

Like Lily’s mother, many officers disdained the slang of the troops. A military journalist summed up this attitude when he called their slang “a gross perversion” of language. He made an exception for skedaddle, though, because it came from “good Hellenic stock.” Another amateur etymologist thought the word could be attributed to a “Harvard student in the army of the Potomac” who knew that the Greek skedannumi means “to scatter.”

Shoddy now means “cheaply imitative” or “hastily or poorly done,” according to Merriam-Webster. During the war it referred to the cloth from which Union uniforms were sewn. This shoddy was made of old wool fibers, sometimes with a little glue added to strengthen the weave; it was described as “poor sleazy stuff” that often dissolved in the rain.

The Civil War also produced several new words for money. Greenbacks were paper notes not backed by gold or silver, and which were printed in green ink. This term is still used today. Spondulix, also spelled spondulicks, however, is less common. This would seem to be another “Harvard student” word, derived from the Spondylus genus of mussels, whose shells resemble coins. It was used by people across the country: A soldier wrote that he’d welcome “a little spondulix” from his folks.