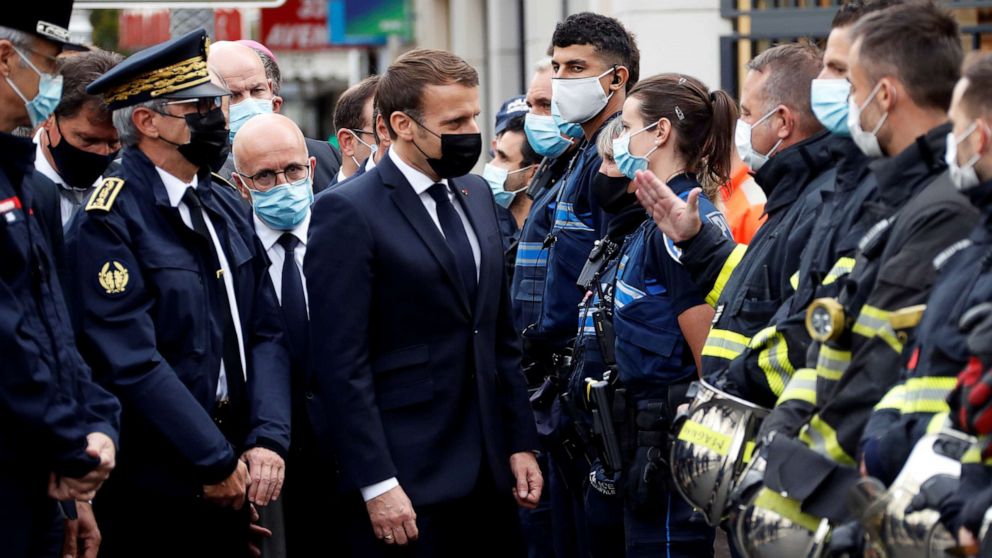 LONDON — Three people are dead after a series of stabbings in a “suspected terror attack” that occurred at the Basilica of Notre-Dame in Nice, France, at 9 a.m. local time on Thursday, ABC News can confirm.

“Thank you to our municipal police officers who arrested the author of a stabbing attack in the Notre Dame sector at #Nice06,” the mayor of Nice, Christian Estrosi, said in a tweet. “I ask the people of Nice to avoid the area to let the police and emergency services work.”

The suspect was arrested after the attack, according to the Associated Press, and taken to a nearby hospital after being injured during the arrest. Authorities say he was believed to have been acting alone.

Mayor Christian Estrosi said that the attacker yelled “allahu akbar” several times during the attack but these reports have not yet been confirmed.

French President Emmanuel Macron has already arrived in Nice in response to the attack as France’s Interior Minister says he has opened a “crisis cell following the events.”

The country had been attacked “by Islamic terrorists,” Macron said, speaking in Nice on Thursday. “If we are attacked, it is because of our values, our values of freedom and our desires not to yield to terrorism,” he said.

The French president said the country soldier is moving to its highest level security alert and that deployment would be stepped up across France as well as protection over places of worship including churches.

A bomb disposal unit is also responding to the crime scene and heavily armed anti-terror police are currently patrolling the streets of Nice and around the cathedral, which is the largest church in the city. Controlled explosions have taken place in Nice following they early morning attack.

Several people are also reported to have been injured in the terror but it is unclear how many and what the extent of their injuries might be.

Mayor Christian Estrosi said there were three victims, including two inside of the church.

“Nice has paid too much of a price, like our country in recent years,” Estrosi said in a tweet. “I call on the unity of Nice inhabitants.”

The attack comes while France is still reeling from the beheading earlier this month of French middle school teacher Samuel Paty.

The attacker who killed Paty had said he wanted to punish him for showing pupils cartoons of the Prophet Mohammad in a civics lesson.

It also comes amid mass protests in many Islamic countries against Emmanuel Macron after the French President spoke up in defense of the cartoons.

With regard to the attack carried out in the Cathedral of Nice, the Director of the Press Office of the Holy See in the Vatican, Matteo Bruni, stated the following:

“It is a moment of pain, in a time of confusion. Terrorism and violence can never be accepted. Today’s attack has sown death in a place of love and consolation, like the house of the Lord. The Pope is informed of the situation and is close to the mourning Catholic community. He prays for the victims and their loved ones, so that the violence may cease, so that we may return to look upon ourselves as brothers and sisters and not as enemies, so that the beloved French people may react united to evil with good”.

Elsewhere, a security guard at the French consulate in Jeddah, Saudi Arabia, was injured on Thursday when he was attacked. One person has been arrested following that attack and the extent of the guard’s injuries are currently unknown.

Vladimir Putin sent a telegram to President Emmanuel Macron in which he expressed deep condolences over the tragic consequences of terrorist attacks in France.

“Special indignation is caused by the cynical and cruel crime committed within the walls of a church. Once again, we have seen that terrorists absolutely lack any human morals. It is obvious that fighting international terrorism requires the global community to join forces,” the telegram read.

Putin confirmed the readiness of the Russian party to the closest cooperation with French and other international partners in all directions of counter-terrorist activities.

The president of the Russian Federation also said that Russian people share the anger and grief of French people and passed his sincerest sympathies to the families and closed one of the killed.

There have been other notable terror attacks in Nice over the past several years.

In 2016, a truck was deliberately driven into crowds of people celebrating Bastille Day on the Promenade des Anglais in Nice, France, resulting in the deaths of 86 people and the injury of 458 others. The driver was Mohamed Lahouaiej-Bouhlel, a Tunisian living in France. The attack ended following an exchange of gunfire, during which Lahouaiej-Bouhlel was shot and killed by police.

The Nice church where Thursday’s knife attack occurred is located less than a mile from the site in 2016.

In 2015, there was another stabbing in Nice outside a Jewish Center when three soldiers patrolling were attacked.