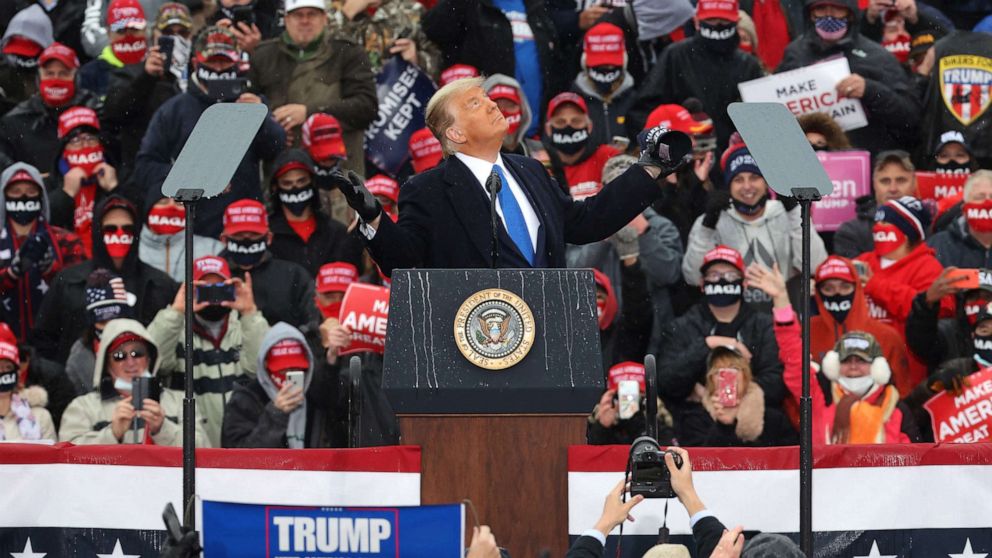 There’s a reason, of course, for the coverage. And new ABC News/Washington Post polling out Wednesday morning shows how extensively COVID perceptions are impacting the race — particularly in a few states that are likely to matter the most.

Former Vice President Joe Biden leads Trump 57-40 among likely voters in Wisconsin, and 52-46 in Michigan. That’s a sizable lead with less than a week to go in both critical states, with the Wisconsin number striking on its own because it shows a larger margin than other recent polls.

One thing driving the story in Wisconsin in particular: the pandemic. The state is in the midst of a full-on coronavirus crisis, setting new records for hospitalizations and sitting near the top of the list for per capita cases.

The president is 20 points underwater on his handling of the pandemic in Wisconsin, and Biden is trusted more than Trump on the subject by a similar 20 points. The poll shows Trump’s support among suburban voters cratering in Wisconsin, particularly in comparison to Michigan.

The polling also shows Trump trailing among seniors in Wisconsin by 24 points and in Michigan by 12 points. He carried voters 65 and older narrowly in both states four years ago, according to exit polls.

Biden can win the presidency by rebuilding the blue wall — Wisconsin, Michigan and Pennsylvania — without carrying a single other Trump state. It might wind up being rebuilt with help from the crisis that has defined Trump’s presidency.

Worried it is too late to get that absentee ballot in the mail?

Michigan Secretary of State Jocelyn Benson Tuesday said she is advising voters to drop their ballots off themselves.

“It’s now important to return your ballots in person. Don’t rely on the mail. Regardless of what state you’re in, get your ballots in by your state’s deadline,” Benson told ABC News Live Prime Anchor Linsey Davis.

In at least 38 states this year there will be designated dropboxes for voters to drop off their ballots in person and in almost all states voters can drop off absentee ballots at county clerk offices too.

More, in most states voters can in fact change their mind and vote in person if they requested an absentee ballot, but there are different rules about how to do that. And in some cases voters might only be given a provisional ballot.

According to the U.S. Vote Foundation, in 15 states if a voter who changes his or her mind and requested an absentee ballot but now wants to vote in person, he or she will have to bring in their absentee ballots and “surrender” them.

The organization writes, “In all cases, we recommend sticking to your original voting plan — if you requested and received an absentee ballot, it is best to vote that ballot. Changing your mind creates additional work for poll workers and election officials in a year when there is already significant pressure on our election system.”

The legion of early voters reflect a decisive electorate, anxious to express whether they believe Trump deserves a second term. And this year, the roughly 69.6 million voters who have already cast their vote is more than half of the total turnout from four years ago — a significant marker in the election with still days to go.

Despite Trump’s claim on Tuesday that some voters are less decisive, frantically trying to change their votes in his favor after the second debate, he wrongly said that most states allow for voters with a change of heart to recast a ballot.

Amid the massive shift to mail voting, only a handful of states allow for voters to change their vote after they have already voted. Michigan, Wisconsin, Minnesota, New York, New Hampshire and parts of Connecticut allow voters to “spoil” their ballot and re-vote, but each state is guided by different rules and deadlines. In Minnesota, the deadline has already passed.

Some election officials are also pushing back against the president’s assertion that voters are having a change of heart. A spokesperson for the Michigan secretary of state said that most voters requesting to spoil their ballots are due to printing issues and other ballot-related errors — not because voters have changed their mind. Other officials are warning the president’s rhetoric may compound confusion over absentee voting so close to deadlines.

“If someone spoils their ballot, will they get a new one back in time? With five days left? (The president) is putting up another obstacle to have a ballot returned in a timely fashion,” John Gleason, the Genessee County clerk in Michigan, told ABC News.

A surge in coronavirus cases has damaged President Donald Trump’s re-election campaign in Wisconsin, with growing criticism of his work on the pandemic and preference for former Vice President Joe Biden to handle it. Biden holds a slighter advantage in Michigan, with sizable leads among women, moderates and independents in ABC News/Washington Post polls in both states.

ABC News’ “Start Here” podcast. Wednesday morning’s episode features ABC News’ Eva Pilgrim in Philadelphia, where the death of a Black man at the hands of police has set off protests. ABC News Supreme Court contributor Kate Shaw brings us up to date on voting-related lawsuits across the country. And ABC News Senior White House correspondent Cecilia Vega explains which issues matter most to Latinx voters this election cycle. http://apple.co/2HPocUL